On Wednesday, Kim Kardashian West and Kris Jenner discussed the rise of their multimedia empire at The New York Times DealBook Conference with Andrew Ross Sorkin. Kanye West joined the conversation from the audience. Here are some notable moments from the interview.

Kim on social media and the potential of taking “likes” away on Instagram:

“I think about when I raise my kids and screen time, phone time, what to post, what not to post, even posting things in real time. I learned from a bad experience that I had when I was robbed that people really knew my every move, they knew what I had, they knew where I was, what I was doing, and that to me really changed maybe the things that I post.

“I still want people to feel like they’re along that journey with me, but I might video something and then post it like 30 minutes later, when I’ve left the location more for privacy. But as far as mental health, I mean it’s something that taking the likes away and taking that aspect away from it would be really beneficial for people. And I know that the Instagram team has been having lots of inner conversations with a bunch of people to get everyone’s take on that and is taking it really seriously. That makes me happy.”

Kim on business partnerships and activism:

“I am really cautious about what I spend. So if I overspend on something and a paid post happens to come in at that time, I’ll weigh it out and think, ‘O.K., well I have to pay for x, y, and z.’

“Now it’s a little bit more personal for me. If I have a paid post that comes in and I think, ‘O.K., well this can fund x amount of people that are behind bars, that can help free them with simple legal fees that they just can’t afford, then that would be worth it to me, even if the post might be a little bit off-brand for me.’ I really weigh out different things now than I used to.”

“When I mentioned I was having a CBD baby shower because I needed some calm before the storm of a fourth kid coming, every CBD company on the planet reached out. And it’s kind of this joke also that I do, if I really want something and I’m a bit lazy, I can tweet, ‘I’m loving Oreos, I’m craving Oreos right now,’ and then on my doorstep, every flavor Oreo will show up.”

Kris on the ad campaign that got away:

“I thought Kim would be so great in a ‘Got Milk’ campaign, remember like everybody did these ‘Got Milk’ campaigns? And I thought, oh, well she’s perfect for that — I don’t know where that came from and I’m sure I was a lot more excited and enthusiastic about this idea then the ‘Got Milk’ people were, so that really never came to fruition.

"A couple years ago, Kim was in a music video and she was taking a milk bath and I thought, ‘You did it Kim, you got milk all over that body!’”

Kim on the power of saying no:

“I will say a cute story since my husband’s here. So there was a fast-fashion brand, a few of them, and they would knock off Yeezy all the time, his color palette, designs. So this fast-fashion brand offered me a million dollars for an Instagram post and I thought, ‘O.K., well that’s easy’ — just to wear clothes that I could pick, anything that I wanted, it’s a quick post — and when I told him about it he asked me not to do it and said out of respect, I don’t think that we should be giving them everything, they copy everything.

“I completely understood why he said no. I gladly said no. And then for Mother’s Day, he handed me an envelope and it was a check for a million dollars saying ‘thank you for not posting for the other brand.’ And then — I don’t know if I’m supposed to say this or if I have — and a contract to be an owner in Yeezy as a thank you. So there is power in saying no sometimes.”

Kim on Kanye’s involvement with Skims, her new shapewear brand:

“We’re very much together in every last decision and detail that we make. For Skims, he drew the logo, our packaging was one way and I thought it looked amazing and then he walked in and had about a two hour conversation with my whole Skims team about why it was not so amazing. But it was really inspiring and really when you look back, it was really trendy, the old packaging, and I would have been sick of it by now.

“He picked our photographers, was involved in the castings for the models for Skims and colorways, I mean everything you could think of, so we really are, he’s like my ghost stylist and my ghost creative director.”

Kim on meeting with President Trump:

“But that was a big thing where so many people advised me, ‘Don’t go to the White House.’ And that didn’t make sense to me because I was like, if someone can get out of prison and get their life back versus my reputation of going to the White House — when there is only one person on this planet that can make the decision and that would be the president — and that was even a question for the media, that just absolutely didn’t make sense to me. I would go see anyone in power that would have that decision to change someone’s life.”

Kim on starting her own law firm one day:

“I’m definitely working really hard and it’s a commitment that I’ve chosen to take this time away from my family to study and to not go out with my friends and live a different life. And I’m so O.K. with that. I love it and I just hope that one day I can start a firm that will help with prison reform. I would love to hire these men and women that are behind bars because they know the law better than most lawyers.” 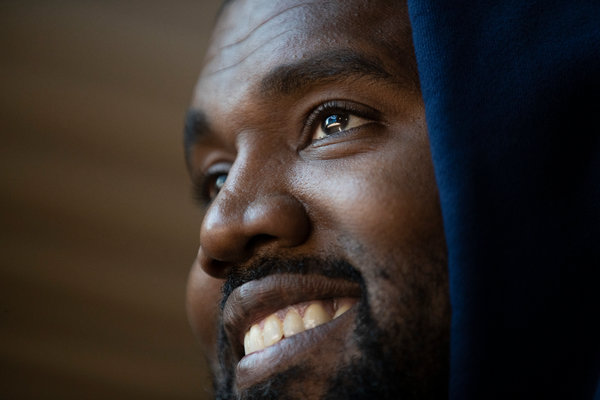 Kanye on what he’s learned from family:

Kanye on not being a ‘centimillionaire’:

“From my perspective, you know Jesus has already won the victory and it’s for me as a man, as a Christian, as a billionaire, as a founder of a $3 billion company to stand up and be — this has to be stated, because Forbes chose to call me a centimillionaire when I showed them the receipts of $890 million last year.”

Kanye on starting a church and social media:

“But just as a male opinion, looking at my daughters and looking at my family and as we are starting this church and saying that this innovation and community and what we’re doing with education and what we’re doing you know in politics even now like we have 12, 500 acres in Cody, Wyo. Trump has actually opened up the ability to buy more land and in America — you know America, you can buy land and we can be owners and we don’t often have to be just the product of what black Twitter tells us what we’re supposed to do.”

“This has been taken out of every single one of my interviews so I’m going to say it now: My father’s a Black Panther, my mother was arrested to fight for us to have the right to vote, but it was the right to vote for who we tell you to vote on.”

Kim on what she hopes the Jenner-Kardashian empire will look like in a decade:

“I think we would be just continuing doing what we’re doing.

“I hope that my beauty brand and fragrance brand continues to grow. I hope Skims is an amazing business and everywhere and a necessity for people. I really want to focus and I hope that I’m a lawyer in ten years and have an amazing firm and changing the whole prison system. I hope that all my sisters and brother and everyone is just happy and living on a farm in Wyoming.”