Louise Linton, in character as Catherine Black, an exquisitely attired bisexual sociopath, watches a hairy spider tiptoe across her desk. It comes a little bit closer. And closer. In steely voice-over, Catherine contemplates the peculiarities of arachnid biology: how some females kill and consume their partners after sex. Why are some males willing to risk anything, even copulatory suicide, to get it?

And then she tosses the critter into her mouth: chomp.

This is “Me You Madness,” a comedic thriller that was also written, directed and produced by Ms. Linton, the much-vilified wife of Steven Mnuchin, the departing Treasury secretary. 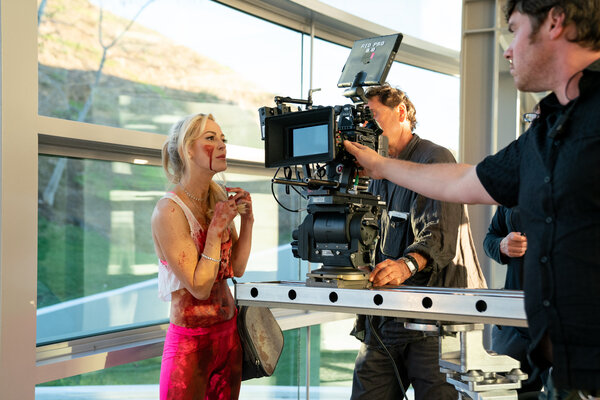 Catherine describes herself as “a materialistic, narcissistic, self-absorbed, raging misanthrope” who “may or may not have an undiagnosed personality disorder” and is “addicted to a variety of things — mainly cocaine, champagne, excessive exercise, expensive shoes and indescribable violence.”

She loathes commercial air travel and loves high fashion. (Ms. Linton squeezed 42 outfit changes into the 98-minute movie.) Catherine is refined yet comically crude, abruptly announcing at one point, “I’ve really got to take a dump.”

There is more. So much more.

“Me You Madness,” available on V.O.D. on Feb. 12, will go down as many things. Some will see it as a camp-tastic dark comedy, rewinding over and over again to make sure they saw what they just saw. Others will dismiss it as the Hollywood vanity project to end all Hollywood vanity projects. In an interview, Ms. Linton said her movie was financed by “friends and family.” She would not say how much it cost. (Millions, easily.)

“There will be people who love it and people who hate it,” Ms. Linton said. “But I don’t care what people say. I’m proud of my little film. It’s a potpourri of silliness.”

A teaser trailer was supposed to have arrived by now, but Ms. Linton on Thursday decided to pause the film’s promotional campaign, citing the “sickening” storming of the Capitol by pro-Trump forces.

Ms. Linton, 40, is mostly known for an epic Marie Antoinette moment. In 2017, she Instagrammed a photo of herself and her husband disembarking a military jet after a jaunt to Fort Knox. She added hashtags pointing out her designer duds, listing #rolandmouret, #hermesscarf, #tomford and #valentino. When an Oregon mother responded with a critical comment, Ms. Linton belittled her, creating an internet inferno.

There have been other blunders, like her disastrous 2016 memoir, “In Congo’s Shadow: One Girl’s Perilous Journey to the Heart of Africa.” It recounted her 1999 stint in Zambia as a volunteer; the book was derided as inaccurate and offensive and ultimately pulled from sale.

To some, however, she will forever epitomize the Trump administration’s intellectual vacuity and narcissism. The Washington Post called Ms. Linton “the Trump administration’s resident supervillainess” in a 2018 headline on an opinion column, one of at least 13 negative articles about her in The Post since 2017, when Robin Givhan, a senior critic, opened a piece with this zinger: “Louise Linton has proved herself to be an exceptionally obnoxious human being.”

“Me You Madness” could easily be interpreted as Ms. Linton’s response — a sort of cinematic middle finger to the haters. For most of the film, she plays a hyperbolic version of her public image; Catherine is a couture-obsessed, nouveau riche, man-eating nightmare. But it ends with a big twist. Catherine (spoiler alert) falls in love and softens into a nice person.

“It’s not nice to judge other people on their looks, beliefs, political persuasion or lifestyle choices,” Catherine says, hugging a guy of size in her Peloton class. “Let’s all just be a little kinder to one another.”

Ms. Linton, however, insisted that “Me You Madness” was in no way a clapback. “It’s not that at all,” she said.

Really? Not just a little?

It was late November, and we were dining under heat lamps on the patio at Front Yard, a restaurant in Studio City, Calif., about 25 minutes from the Mnuchin mansion in Bel Air. Howard Bragman, Ms. Linton’s publicist, had joined us.

I speared a caramelized brussels sprout and tried asking the question in a different way. She wrote “Me You Madness” in 2018, after a very harsh indoctrination to the political spotlight. What state of mind was she in?

“I definitely felt censored, and I didn’t know what I was allowed to be,” Ms. Linton said. “You can’t wear this. You can’t do that. You start to feel a little nervous to do anything. I spent plenty of days in a curled-up little ball, just crying and not understanding.”

She pushed up the sleeves on her fuzzy sweater. “In writing and playing Catherine I’ve discovered an extraordinary sense of freedom and fun,” she said. “This character can be so uninhibited in her universe.” Catherine, Ms. Linton added, doesn’t care at all what people think of her.

And Mr. Mnuchin’s reaction to the unbridled finished product?

“He loves it!” Ms. Linton said. “He thinks it’s hilarious. It’s a fun, harmless movie — a campy, playful homage to femme fatales. And to the ’80s, with its fast cars and hot babes and fun fashion and ‘Tron’ lighting.”

Mr. Mnuchin, a former Goldman Sachs partner and film financier whose net worth has been estimated at $400 million, wrote in an email: “I watched Louise create this film from first draft to final edit. I’m proud of her drive, tenacity, and spirit. The movie is highly entertaining and very good fun.”

Ms. Linton looked skyward and paused for what felt like 10 minutes. “Probably not their cup of tea,” she said at long last. She started to add something, but Mr. Bragman cut her off.

During our two-hour dinner, Ms. Linton came across as an Everywoman, albeit a tiny one wrapped in vegan cashmere and a fabulous fringed shawl. I expected imperiousness and privilege; she was born in Scotland, spending weekends as a teenager at an 18th-century castle, which her developer father bought and turned into a luxury hotel. Instead, Ms. Linton served up chatty and funny — a gay’s best gal pal.

She stubbornly (if politely) steered clear of politics (except to describe herself as “a huge liberal”), yet overflowed with unsolicited tidbits. She watches the TV drama “Yellowstone” with her husband, for instance, and has the hots for Rip, the beefy ranch hand played by Cole Hauser. “I’m like, Steven, you need to put on a cowboy hat and talk like Rip,” she said, “and Steven makes fun of me by going, ‘Rip, Rip, Rip.’”

The conversation turned to vegan-friendly fashion (she is starting her own line); what shes been reading (Bob Iger’s business book, Demi Moore’s memoir); and her multifaceted advocacy for animal welfare. “I’m currently working on trying to get giraffes added to the endangered species list,” she said matter-of-factly.

Ms. Linton’s primary focus, however, is Stormchaser Films, the production company she founded in 2012.

Success as an actress has been elusive for Ms. Linton, who started her Hollywood career after graduating from Pepperdine University in 2005. (She studied broadcast journalism.) Her break came in 2007, when “CSI: NY” cast her as a nanny who — wait for it — dresses up like Marie Antoinette to escort a teenage heiress to a French Revolution-themed fund-raiser.

The next year, she got a part in “The Echo,” a low-budget horror movie, but the film’s director later said she was only cast after her first husband, the Beverly Hills lawyer Ronald Richards, wrote a check. “We put $50,000 into the film, and I still had to audition for the role!” Ms. Linton said later in an email. “Had I known back then what I know now, I would have put money into a better movie!”

In total, Ms. Linton, who Maxim magazine once called “the hottest thing to come out of Scotland since microwaved haggis,” has played about 20 roles in films and television shows, none particularly notable. (While building her acting résumé, Ms. Linton earned a law degree in 2012 by going to night school. She never took the bar exam. “I went to law school so I could have a legal background for producing, not because I wanted to be a lawyer,” she said.)

With Stormchaser, Ms. Linton is trying to take control of her Hollywood destiny. She starred in the company’s first movie, “Intruder,” as a cellist who battles a murderous stalker. Other planned films include “Serial Daters Anonymous,” about a witty columnist who goes on a retaliatory dating streak after discovering her fiancé cheated. “Slay” is about an actress who seeks violent revenge on internet trolls. (That one, Ms. Linton said, is a clapback.)

But the immediate bet is “Me You Madness.”

“It’s quite cutting-edge and even a bit experimental,” said Reinhart Peschke, the film’s cinematographer. “I hope people see this movie and realize that Louise is way underrated.”

Ms. Linton said her screenplay was inspired by classic femme fatale movies like “Leave Her to Heaven” and “Double Indemnity.” Catherine takes her name from Sharon Stone’s character in “Basic Instinct.” An array of other movies influenced “Me You Madness,” including “Footloose,” “Flashdance,” “Atomic Blonde” and “Neon Demon.”

“If you’re thinking this is a straight ripoff of ‘American Psycho,’ in some ways you may be right,” Catherine says. “But this is a woman’s tale.”

For the male lead, Ms. Linton chose the actor Ed Westwick, from “Gossip Girl.” He has baggage of his own. In 2017, Mr. Westwick was of accused of raping two women and sexually assaulting a third. He denied any wrongdoing, and Los Angeles prosecutors didn’t pursue charges, citing insufficient evidence.

“I’ve been through my own reputational challenges, as you know, and I would never want to not hire someone I think is talented because he had been accused of something,” Ms. Linton said. “He was perfect for the role.”

After eight days of filming in late 2018, the cast and crew had to flee Malibu because of the fast-moving Woolsey fire. Production did not restart for four months. Ms. Linton used the downtime to rehearse and create elaborate storyboards. “I did all of my storyboarding with Barbie and Ken and little Polly Pocket dolls,” she said, explaining that she pretended they were actors and experimented with camera angles using her iPhone.

Adam Fogelson, chairman of the STXfilms Motion Picture Group, which is distributing “Me You Madness,” called the movie a “gloriously committed” anti-romantic comedy.

“Louise is certainly not running away from what the conversation, right or wrong, has been about her,” Mr. Fogelson said. “It takes a lot of courage to put yourself out there like this — financially, creatively, personally.”

Still, Mr. Fogelson emphasized and re-emphasized that STXfilms was not involved with the movie’s creation. “We’re not financially on the hook for anything,” he said. “The reason for STX to be involved is that Bob and Steve have been close friends forever.” He was referring to Mr. Mnuchin and Robert Simonds, chief executive of the studio’s owner, Eros STX Global.

As our dinner wound down, Ms. Linton grabbed a slice of mushroom and leek pizza, folded it in half and took a delicate bite. I asked again whether she was prepared to return to the court of public opinion. A lot of people will not heed the film’s “be a little kinder” directive.

“Once I realized that I can’t be defined by what total strangers have to say — you know, Darth Vader, which I actually found funny — it was really freeing,” she said.

Maybe a little too freeing? “Me You Madness” includes a testicle supper.