Melania Trump, 49, stepped out of her helicopter and on to the Buckingham Palace grass looking every inch the glamourpuss in a tight white dress and statement hat. Not to be outdone, Camilla, Duchess of Cornwall, also wore the summery shade. The women chatted together as they walked across the lawn towards the Queen, who was waiting for the group in the shade. The Trumps and the Royal Family will enjoy a lunch together in Buckingham Palace today.

Mum-of-one Melania made sure her supermodel figure was on full display, with the white dress fitted close to her body.

The dress was tight at the waist with a navy let, and had a large navy collar.

Melania wore a matching white hat with navy trim to complete the look.

She strode across the grass in a pair of block heel stilettos in navy.

Camilla, meanwhile, wore a more creamy shade of white, and also completed her outfit with a hat. 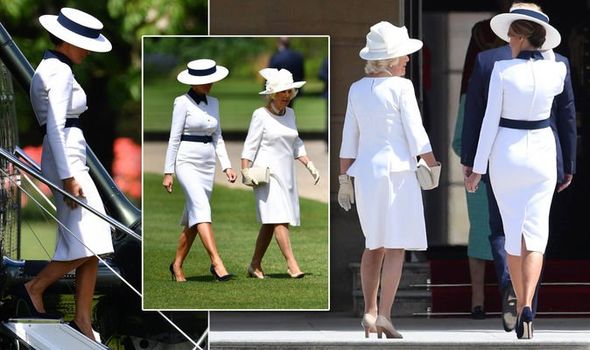 She held a small cream clutch bag in her hands, which were covered by cream leather gloves. A pair of low-heeled pale coloured shoes provided the finishing touch to Camilla’s look.

Melania wore her long hair up in a chic low bun under her hat, and kept to her favourite makeup look of heavy mascara and pinky-nude lipgloss.

Joining the women was Ivanka Trump, who could be seen watching from a Buckingham Palace window – with the First Daughter also in white.

Earlier today, Melania arrived in London in a £650 Burberry blouse – but sadly her outfit was savaged on Twitter, with many comparing her to an flight attendant.

One commenter wrote: “I thought she was one of the flight attendants.”

Another joked: “Nice to see @FLOTUS doubling up as an air hostess today.”

And another questioned: “Did Trump make Melania work as an air hostess to pay for her flight over here?”

A simple pencil skirt showed off her long model legs, which had a deep bronzed tan. The mum-of-one kept her eyes covered in a pair of oversized sunglasses.

On her feet, Melania donned a pair of Christian Louboutin court shoes, the red sole visible as she walked down the steps from the plane.

She wore her hair loose over her shoulders, leading to a windswept look as she battled the wind from the plane and waiting helicopter.

Mum-of-one Melania can speak more languages than any other First Lady before her: English, French, German, Italian, Serbian and of course her mother tongue, Slovenian.

This also makes her the only First Lady whose first language is not English.

After Jacqueline Kennedy, Melania is the second First Lady who is a practising Catholic.

She met Pope Francis as part of a foreign tour with her husband and stepdaughter Ivanka last year.

Her skills aren’t confined to print, and she appeared in a commercial for Aflac, an American insurance company, in 2005.

Melania’s parents are Amalija Knavs and Viktor Knavs, and the couple live together in Washington.

She has one sister, Ines, who is reported to live in New York and work as an artist.

On May 7 2018, Melania launched her flagship campaign as First Lady, BE BEST, which The White House describes as “an awareness campaign focused entirely around the well-being of children”.

There are three main strands to the initiative: well-being, social media, and opioid abuse.