“When was the last time you buttoned a shirt?” Alessandro Sartori, the artistic director of Ermenegildo Zegna, said last week on a phone call from Milan before his fall show. The question was not wholly rhetorical.

Like many of us, Mr. Sartori has spent lockdown wearing garments that are comforting and easy, with few of the protective dimensions of clothes designed to shield us from the outside world. It is not that we’ve spent much of the last year in sweats and T-shirts and hoodies because we are lazy. Rather, we molted our cloth armor because we had no need of it.

In response, men’s wear designers in Florence and Milan presented collections last week that, for all their willed optimism, felt tentative, cautious, almost infantilizing. Far from risking bold statements about a future certain to bring great change, they showed uniforms for a grown-up nursery school.

At the Pitti Uomo trade show in Florence, Brunello Cucinelli proffered a “message of hope and swift recovery for the future,” as he said in a Zoom preview of a collection that took elements of the easeful and luxurious sportswear that made him both a retailing bellwether and a billionaire, and softened them to a melting point.

Mr. Cucinelli started out in 1978 flogging cashmere knitwear. It was Gene Pressman, the storied Barneys New York merchant, who encouraged the novice designer to branch out into full collections based on how he himself dressed. In the decades since then, Mr. Cucinelli, a farmer’s son, single-handedly devised a sartorial template for the new ultrarich. His formula of blazers, gilets, sweaters and trousers in alpaca or cashmere treated as modular elements of a new suiting worked for people who had already largely abandoned offices. They were thus ready-made for the age of remote work and whatever comes next. 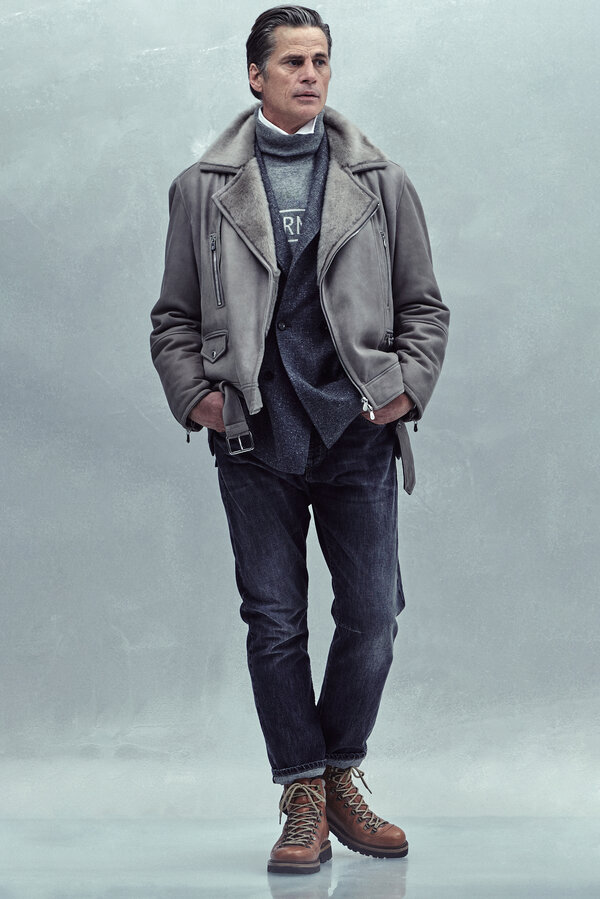 This season Mr. Cucinelli produced his elegant stuff in more deconstructed ways than ever. Think down puffers knitted in cashmere rather than encased in wool shells. Even that was more practical than prophetic, since thermostats on private jets can be surprisingly fluky. No one wants a venture capitalist to catch a chill.

At Ermenegildo Zegna, Mr. Sartori, with a show titled “The (Re) Set,” produced a solidly cohesive collection and one that seemed to have profited from the months of Italy’s serial lockdowns. At pains in a phone call to avoid the term “chore coat,” he finally blurted it out. And there is little doubt that the boxy 19th-century worker’s jacket that proved itself a standby of the new remote workplace will be with us for some time.

Functional and forgiving, the chore coat in Mr. Sartori’s hands was rendered luxurious enough to justify a Zegna price tag and to surmount the contradictions inherent in adapting a garment originally designed for ditch diggers for those who’ve never calloused their hands.

The Zegna video presentation, which featured models slouching around Milanese landmarks like the Piazza Olivetti and the campus of Bocconi, Italy’s foremost business school, was appealing, if frustrating to those who prefer to experience a collection in its full dimensions. Squinting at screens for details will never be a substitute for eyeballing this stuff IRL. Still, there was a dramatic video finale with models arrayed in the squares of an enormous grid that, depending upon your demographic, resembled either a Zoom cascade or the set of “Hollywood Squares.”

At Etro, live models walked an empty show space on the Via Tortona in the southwest of Milan — an area that, before it became Fashion Central, defined the wrong side of the tracks — and then exited into the winter sunshine. Suddenly an array of motley outfits that seemed borderline incoherent when viewed indoors made much better sense.

Far from being random, Kean Etro’s shop-your-own-closet mash-up of paisleys, plaids, stripes and leopard patterns had a deliberate point to make, one that required only the framing of the broader cityscape to coalesce. In a post-Covid era, we may all find ourselves less constrained than in the past by rigid standards of taste, as Mr. Etro suggested. Why not pair cable knits with patterns with upcycled jacquards with Etro logos with a sweater belted like a dress, if you want to? Who says you can’t dress for the street just as you do around the house?

Why not, then, wear a onesie on the job?

This item turned up first in a Fendi show created in collaboration with Noel Fielding, the British comedian and host of “The Great British Baking Show.” Typically Silvia Venturini Fendi is well ahead of the cultural curve, but here her creativity seemed to stall in the face of the fact that “normality has lost its meaning,” as she noted in a Zoom call from Milan.

Or else she was onto something. If initially it seemed that Ms. Fendi could not be serious in suggesting that guys in the future will dress for the office in channel-quilted and down-stuffed dressing gowns or trapunto pajamas or thermal underwear that seems swiped from an Adult Baby catalog, it developed on second glance that she was.

Who says, after all, that the regressive effects of dressing for confinement will prove reversible? Crocs are surely here for the long haul. So are bedroom slippers on city streets. A great many of us have been working in our underpants all along.

Onesies were at the Prada collection as well. Here they were referred to as long johns.

Few collaborations in recent memory have sparked as much excitement as that of Miuccia Prada and Raf Simons, both powerfully influential figures, each notably strong-willed. Where Mr. Simons appears to be substantially a designer who functions on instinct, Mrs. Prada’s gifts are pragmatic and so assuredly cerebral she is the design equivalent of the actress you would pay to hear read the telephone book.

This came clear in a virtual news conference after the Prada video show on Sunday, during which the two designers performed professional diplomacy at a Kabuki level. Each asserted that they routinely agree to disagree in their new practice. If one designer hates an idea, the other automatically demurs. You first; no, please, after you.

The resulting collection felt perhaps less collaborative than conjoined. Look one way, and you detect Mr. Simons’s emblematic men’s wear gestures: skinny tops, ballooning puddled trousers, scrunched-up sleeves, oversize bombers, pinstripes, stuff adapted to the adolescent landscape that is that designer’s natural habitat. Look again and you see Mrs. Prada’s sly plays on the proprieties and sartorial tropes of the high bourgeoisie from which she derives: gloves with appended purselets, stiff and weighty woolens, burgomeister silhouettes and the palette of a Milanese confectionery shop.

Emotion and tactility were two words thrown around by the two at the news conference (as well as at a video Q. and A. open to students from around the world) and alluded to in a set built from rooms covered in wool shearling in the hues of Jordan almonds — part Sacher-Masoch, part Meret Oppenheim. Naturally we are all dying to break out of confinement and give someone a hug. Yet, when the virus abates, and we can finally venture into public, is it inevitable that we will want to dress like the homebound children we have forcibly become? It may well be.

Until then, there is nothing wrong with cuddling up in Prada long johns rendered in pattered mohair, cashmere or Shetland wool. Come the day, though, when we can go to the office, ride a subway or board a plane again, this critic plans to trade in the T-shirts and shorts for hard pants, a decent jacket and, budget permitting, one of Prada’s gloriously subversive grown-up overcoats — the pink one, if I can screw up the nerve.