NEW DELHI — The joint fashion week held by Lakme Fashion Week and the Fashion Design Council of India was an ode to women designers in the new decade: an opening show by Kolkata-based designer Anamika Khanna, and the grand finale by New Delhi-based Ruchika Sachdeva.

With the easier access to the styles, and orders online, the focus was primarily on India’s huge domestic market. Although retail is still recovering — COVID-19 set off a severe lockdown in India and apparel retail was hard hit, with close to a 60 percent decline in sales last year — in general the country’s almost trillion-dollar retail market returned to pre-pandemic levels in February, and the higher-end designer market is now beginning to open up.

The FDCI x Lakme Fashion Week held March 16 to 21 was mostly virtual with six physical shows and provided further stimulus to the sector, with designers emphasizing color and comfort.

While many in the industry had puzzled over the logistics and potential for the first event in 15 years to combine India’s two major fashion weeks, in the end it went off smoothly. Industry analysts believe it helped strengthen the sector, giving buyers easier access and a better foundation to place orders, while taking stock of the uncertain retail climate as the pandemic fluctuates unpredictably around the world. Only on Wednesday there were reports of a new “double mutant” variant of the virus discovered in India.

Here, WWD looks at the opening and closing shows and the women behind them.

Anamika Khanna exuded optimism with her opening show of the five-day event. “Honored to do the opening show,” she said, making note of the fact that she comes from a geographically neutral zone — neither Delhi nor Mumbai, but from Kolkata, as the organizers had to agree on so many different points.

Her collection honored art, traditional textiles and was bound together — as she told WWD — with sheer emotion. “It has been that kind of year for everyone,” she said.

Her use of silks with detailed embroidery, cutwork and a lavish use of tassels gave it femininity, with a play of whites adding elegance. Long jackets, thrown over pants or skirts, provided an option to dress up any outfit. “It was a play for freedom,” she said, “season-less, and border-less.” “Fashion has changed to be about what you want it to be, it is very personal now, and I believe that is very much where it is headed in the future.”

In a year shadowed by illness and death the world over, Khanna’s collection endorsed life.

“I came to it with a positive mood. That feeling of despair is changing. I am observing a more opulent mood in my clients, too, who want to celebrate again.”

Speaking about the individuality imbued in each piece, she said: “I just decided to do pieces that would stay forever. Like the jacket, which was a patchwork of different textiles and threads, which could be used in summer, winter, and you won’t throw it away. It is about resilience.”

Khanna’s sense of hope is reflected in her retail journey — she opened her third stand-alone store of 6,000 square feet in Mumbai’s arty Kala Ghoda area. “While people have been closing stores, I opened a huge store, and I believe it will work,” she said confidently.

Ruchika Sachdeva, founder and creative director of her label Bodice, is making 10 years since she first showed with Lakme Fashion Week as an emerging designer in its NexGen event. It is also two years since Bodice won global attention, winning the women’s wear award of the Woolmark Prize in 2018.

Following Lakme’s policy of featuring a designer who has not done a finale event before, Sachdeva fit the bill. The finale featured Bollywood actress, and face of Lakme, Ananya Panday as the showstopper, in a high-waisted, pleated skirt with geometric prints and a full sleeved crop top.

Bodice was one of the six physical shows held during the combined fashion week. 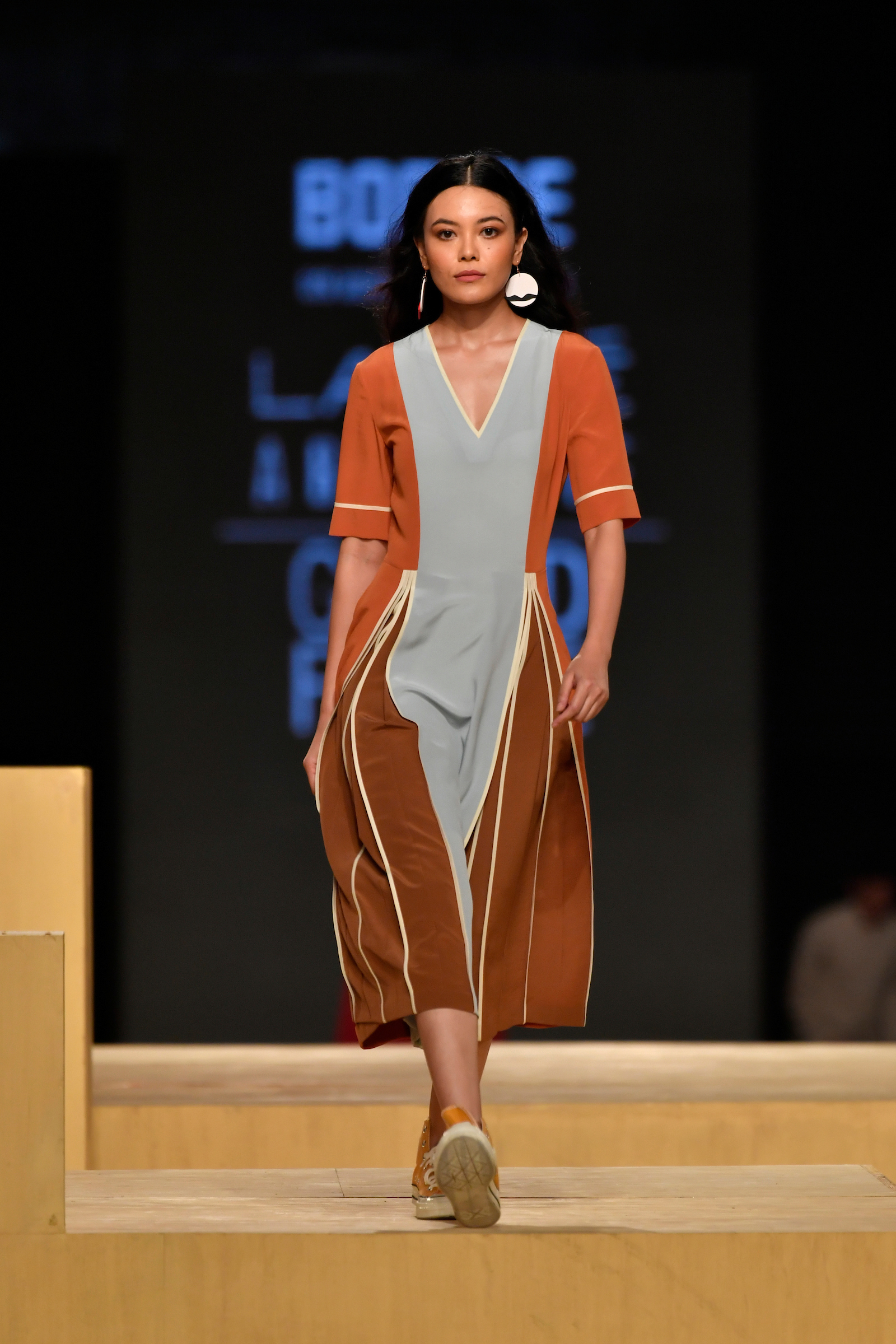 About her collection, Sachdeva said that “it continues with the focus on conscious consumption and sustainability, but with more confidence and amassed knowledge.”

“Bodice was a lot about the more neutral colors — blacks and whites, with simplicity and minimalism — trying to get rid of the chaos in my head. During these last 10 years I find there has been an aesthetic revolution, and over the last year I found myself reaching for colored pieces. I decided this collection would be about color and take some risks,” she said.

Another change: “As I get older, I get more comfortable about my own sexuality, I feel sexier as a woman and that reflects in my collection,” Sachdeva observed. Her styles for the finale were less androgynous, yet keeping the pleats and linear pattern sleeves she favors.

Although Bodice is known for its fine details, she said it has become sharper.

“I have become better at my craft,” Sachdeva said. “It is a very high-skilled process if you want to make a design properly — it has to be biodegradable, environmentally friendly, sustainable. To do all this properly takes time. Over these 10 years, I have begun to understand what people want.

“Now, finally, I know I am a better fashion designer and have the clarity that I am creating something that is worthwhile,” she said.