When attendance at Flemington Racecourse is capped at 5500 and the weather fluctuates from sunny to drizzly to ‘why did we leave the house?’, then the cast of Neighbours become good friends of Derby Day photographers.

The opening of the Melbourne Cup Carnival has witnessed British supermodel Jean Shrimpton upsetting matrons in a white mini-dress in 1965, Nicole Kidman attempting a My Fair Lady moment in 2012, and Naomi Campbell raising the style stakes in Dior in 2013. For 2021 the celebrity wattage was substantially dimmed and the cast of Melbourne’s enduring soap opera were called on to do the heavy lifting. 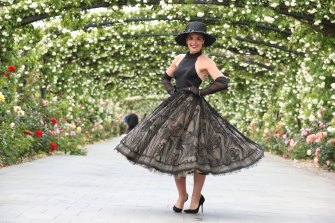 In the absence of the Minogues, Margot Robbie and Natalie Imbruglia, fellow Neighbours alumni Olympia Vallance was deservedly the centre of attention in the Members Enclosure. Wearing a custom-made dress from Melbourne designer Sam Olglialoro, Vallance paid respect to tradition with a full skirt and monochromatic palette, while attracting youthful attention with a rather loosely cut halter top.

“I don’t have a single dress left after lockdown as I spent the whole time doing a wardrobe cull, so it’s only workout clothes. Luckily, Sam made this for me. It’s very classy and very Derby. I wanted to be sophisticated,” Vallance said. “It’s nice to dress up. It’s my time to shine.”

With her hair tightly pulled back beneath a Kim Fletcher hat and sporting a perfect red pout, Vallance was unconcerned about baring a cold shoulder to the fluctuating elements. “Oh I’m working with Penfolds [Derby Day sponsors], so I’m inside, honey. It’s absolutely fine.”

Among the maze of empty tables and chairs in the Birdcage, usually filled with marquees, revellers and paparazzi-hunting influencers, current Neighbours cast member Tim Kano was given the difficult task of finding well-dressed men to be awarded wild card entries into Myer’s Fashions on Your Front Lawn competition. 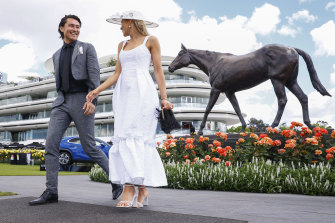 Tim Kano with VRC ambassador Crystal Kimber in the Birdcage at Flemington Racecourse looking for wild card entires for the Fashions on Your Front Lawn competition.Credit:Getty

As Leo Tanaka in Neighbours, Kano has been crushed by concrete and almost embarked on an incestuous romance with his half-sister, so adding ’50s flair to his MJ Bale Derby Day outfit with a pleated black dress shirt was a simple task.

“The men who are here have really embraced tradition but what I am really looking for is the finishing touches, the accessories that complete and outfit,” Kano said. “I’ve been seeing plenty of pocket handkerchiefs and flashes of socks, alongside those without socks. To be honest, socks make sense in this weather.” 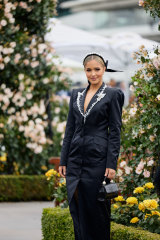 For Riseley, a four-time Olympian who competed in track and field in Tokyo, gaining a recognition in a Country Road jacket and Zara tie was as surprising as being allowed to enjoy the race in person.

“I’ve just come out of isolation for being COVID-positive. I travelled the world for months and then I got it here. It’s all surreal,” Riseley said. “This would be the first time I’ve put on a tie in a year.”

Model Olivia Molly Rogers is yet to appear on Neighbours but as a former Miss Universe Australia was a suitable substitute for former race day queen Jennifer Hawkins. Roaming the Birdcage without the advantage of Vallance’s weatherproof position, Rogers covered up in a pearl-studded tailored black dress from Cappellazzo Couture.

“I’m feeling like Julia Roberts in this,” Rogers said. “It’s giving me ’90s vibes and I’m a fan of ’90s fashion. Here it just has more of a Derby Day twist.”

On Cup Day attendance numbers increase to 11,500 and the Neighbours crew will hopefully be given time to relax and look forward to the hopefully relaxed border restrictions of Derby Day in 2022, when celebrities can return to the races. Some help from Home and Away would be enough.