In a dismally distant year, a wave of exuberant designers emerged, shaking up traditional knitwear with new ways of thinking about colors, shape and technique. Their knits offered both comfort and opportunities for self-expression in isolation. As glimpses of normal life return, each designer is forging a slightly different path through a destabilized fashion industry.

Here are the knitters on our radar: 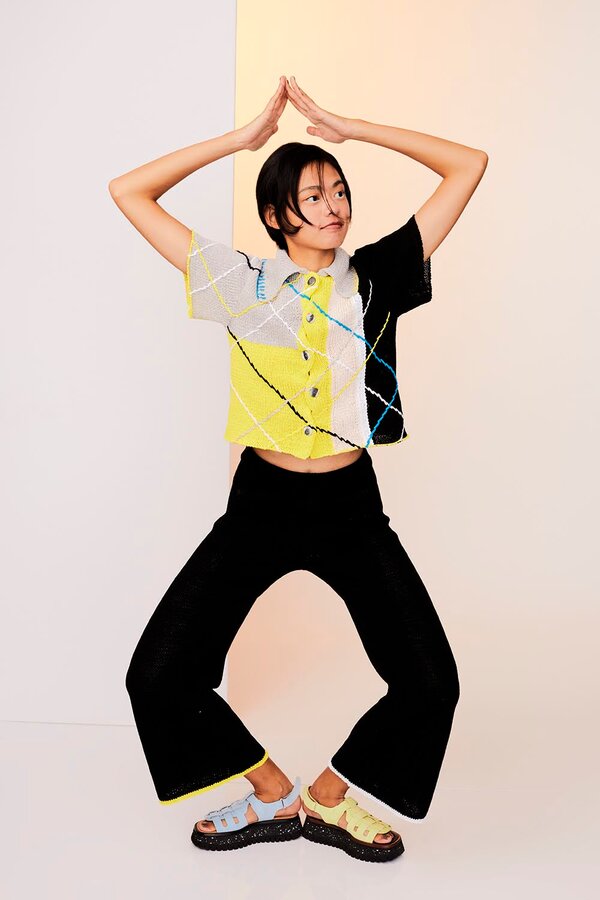 Ms. Chan was a onetime director of knitwear for Rag & Bone in New York, where she lived for 10 years; Ms Chung was a graphic designer for high street brands and department stores in Hong Kong.

“We were both just desperate for change and to do things in a different way,” Ms. Chan said, explaining their motivation for starting YanYan in 2019.

They also wanted to explore a cultural heritage that stemmed from growing up in Hong Kong’s melting pot. From their tiny office in a garment factory, where leftover yarn off-cuts are often used to make limited-run YanYan pieces, they parse their ethnicity by “cherry-picking” classic Chinese design elements and blending them with pop culture references from all over.

Knitted cheongsams and kung fu jackets are given a twist with rainbow bright colorways and print inspirations they pick up from sources as unlikely as the architecture of the city’s public housing estates. Also in the mix? Playful knit halter tops, biker shorts and oversize cardigans. Customers often tell them that they see the city in many of the pieces, even if they’ve never been to Hong Kong.

Ms. Chung said that YanYan, which means “everyone” in Cantonese, uses yarns from Italy, Scotland and Japan but is proudly “Made in China.” “We know how that label might be perceived abroad,” she said, “but we know how much talent there is here that doesn’t always get credit.” EP

A graduate of Tsinghua University in Beijing and Parsons in New York who cut her teeth with internships at DKNY and Alexander Wang, Ms. Zhou always knew she wanted to set up her own shop. She’s now based in Shanghai, and her second-skin cutout bodysuits have found their way onto Solange Knowles, the cult Korean girl band ITZY and Dua Lipa, who wore a barely there mesh iteration in violet and green for the January cover of Rolling Stone.

“My work is an exploration of the intimate tension between fabric and the body,” said Ms. Zhou, who is a finalist for the LVMH Prize this year. A designer who prefers to work on mannequins rather than to sketch, she added that, as with the Japanese wabi-sabi aesthetic, her focus was often on the beauty that comes from imperfection.

Her weblike elasticized knits, often held together with tiny iridescent pearls, both expose and protect the skin, baring as much as they cover. They may not be conventional outerwear, but Ms. Zhou said she is now stocked in 20 stores worldwide. EP

The pursuit of cozy was at an all-time high at the start of the pandemic, and it changed Ms. Macauley’s life. In April, with her chunky, candy-colored knits becoming catnip to the homebound Instagram hordes, she left her job at a supermarket to focus on her fashion label.

At that time, Ms. Macauley made everything by herself. Now she has a team of 15 local knitters. Free People has picked up a few of her designs, and Naomi Osaka appeared on the March cover of GQ wearing one of her color-blocked jackets.

Ms. Macauley was taught basic needle skills by her grandmother at age 6, but she didn’t knit a full jacket until 2018, and she no longer uses needles but her fingers.

“I wouldn’t call myself a knitter as such, because I don’t know how to do the old-fashioned way of knitting,” she said. “I wouldn’t be able to follow a pattern — all of my knitwear is me making it up.” Which meant that during the pandemic, in order to train her new team of knitters, she had to instruct them via video.

“Not every piece is going to look exactly the same,” Ms. Macauley said. “But I like that.” JT

Mr. Mdingi gained experience in fashion media, retail, styling and art direction before realizing his heart was set on fashion design and, in 2015, starting his own label. Working with local patternmakers and the knitting communities in the Eastern Cape, Mr. Mdingi designs knitwear that bridges the gap between artisanal and modern design.

“Our growth has been like zero to two, not zero to 100, but I am happy with that,” he said. “Our roots are in human hands and what we have at our disposal in this country.”

Mr. Mdingi’s most recent collection, Coutts, featured texture-blocked knits on sleeveless vests, fringed dresses and long draped scarves. It was introduced in February at the Pitti Uomo trade fair in Florence and was inspired by his late friend and fellow South African designer Nicholas Coutts, another devotee of sustainable woven textiles. Mr. Mdingi is also a finalist for the LVMH Prize.

“To have that platform and exposure and be part of a more global market has already been invaluable,” he said. “It’s letting me and my collaborators tell our story to a whole new audience.” EP

Mr. Ngxokolo started his label in 2010 after creating a college thesis collection inspired by a ceremonial rite of passage in the Xhosa tribal group. When a young man is 18, his family buys him a new wardrobe to mark his entry into adulthood. Mr. Ngxokolo, unhappy with the conventional dark colors and Eurocentric brands, decided to create an alternative. His initial line — knits inspired by traditional Xhosa beadwork patterns and artifacts — has since spawned a luxury brand with a popular nickname: “the Missoni of Africa.”

“I like it because it reflects that people see we have a very high standard of design and quality, but I also hope that over time, as perceptions change, people will also embrace luxury from Africa without making comparisons,” Mr. Ngxokolo said. Initially local manufacturing was a challenge, but he bought a knitwear factory in Johannesburg and trained the staff to handle the production of his designs.

While well-known in South Africa, as well as for runway shows at New York Fashion Week, Mr. Ngxokolo’s international reputation got a boost when MaXhosa Africa costumes had a star turn in “Coming 2 America.”

“My brand’s ethos runs deeply to promoting my heritage to the rest of the world,” he said. EP

By the time she graduated from Central Saint Martins last year, Paolina Russo was already working on a collaboration with Adidas, flying between Britain and Germany to visit the company’s factories and dig through its archives of trainers and tracksuits.

Growing up in the Toronto suburbs, Ms. Russo played sports (she was nationally competitive in taekwondo) and sifted through thrift shops, two pastimes she never expected would carry her into a career in fashion; she wasn’t even planning on studying fashion.

Back then, her only knitting skill was basic hand crochet, a far cry from the highly technical futuristic knits and optical illusion patterns that have become her signature. As an intern at Maison Margiela, she caught the eye of John Galliano, who called her a “muse” and “Instagram babe.”

Ms. Russo’s work for Adidas includes reflective corset tops, color-blocked sport minis and bodysuits in clashing checkerboard and stripes. The pieces are sexy and cool without veering too far away from athleticism. She will release her first full solo collection in the fall, but she won’t be straying far from sportswear.

“I think it’s really the Paolina Russo world,” she said. “It’ll always be the core of the brand.” JT

Like other knitwear designers, the women of Kepler believe in slow and sustainable production and keeping their manufacturing as close to home as possible.

Alexandra Hadjikyriacou and Jaimee Mckenna teamed up in 2016, a few years after graduating from Central Saint Martins, and spent the first few months of their partnership experimenting with leftover textiles from Ms. Hadjikyriacou’s mother’s interior design business.

As designers, they want to make “pieces that stand the test of time and can be cherished and collected,” Ms. Hadjikyriacou said. Their work has a deconstructed medieval and folk romanticism, like a crew-neck sweater based on a fencing jacket, with a V-shaped bottom and shoulder slits.

As the brand expands, they “want to find a healthy and organic and steady process,” Ms. Mckenna said. Instead of producing multiple collections a year, they hope to create one large collection, releasing it in phases throughout the year. JT