The camera is focused on a middle-aged white man in sunglasses, who is holding a poster depicting what appears to be a fetus with the word “abortion” printed on it. The caption on the video reads, “don’t worry, the volume was turned all the way up so he could hear :-)”

This is just one of a series of viral videos by Alex Cueto, 19, an abortion clinic defender with the organization Charlotte for Choice. She posts videos of her confrontations with abortion protesters on TikTok as @alexthefeminist, to a large audience. The “Short, Short Man” video, which was filmed outside of A Preferred Women’s Health Center, has over four million views.

More well known is the TikTok in which Ms. Cueto recites the lyrics of Cardi B and Megan Thee Stallion’s bawdy hit “WAP,” while an opponent of abortion reads the Bible outside the clinic.

“We treat these protesters like they’re a joke already,” Ms. Cueto said in an interview. “We don’t give them that sense of moral superiority.”

Ms. Cueto, who grew up in South Carolina and now lives in Charlotte, is one of many Gen Z campaigners for abortion rights who use social media to galvanize their peers. “Every day I post about being pro-choice,” said Michaela Brooke, 19, a student at the University of Alabama in Birmingham and an activist with Advocates for Youth, a nonprofit that organizes young people around reproductive health. Ms. Brooke said she posts educational resources, as well as information about opportunities to organize. 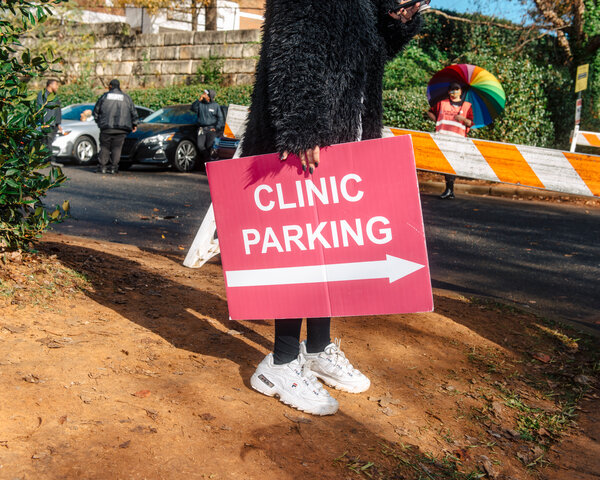 Many of these activists came of age in Southern and Midwestern states with significant restrictions on abortion. Katie Greenstein, 17, who takes nongendered pronouns and lives in Wildwood, Mo., said that they got involved with NARAL Pro-Choice Missouri, the local branch of an abortion rights advocacy group, after Missouri outlawed abortion after eight weeks in 2019 (the law was later blocked by a federal judge).

Still, “abortion is out of reach because of various barriers enacted” in Missouri, Ms. Greenstein said. They include a 72-hour waiting period and a prohibition on the use of telehealth services to counsel those who seek abortions by medication. “It pushed me into wanting to fight,” Ms. Greenstein said.

According to a an American Psychological Association Survey conducted in August, 64 percent of Gen Z adult women say that a possible change in abortion laws is a source of stress for them in 2020. The confirmation of Amy Coney Barrett, a conservative, on the Supreme Court soon after, also invigorated abortion rights proponents who fear that Roe v. Wade may be at risk.

The day after Justice Barrett was confirmed, “I woke up angry, just ready to go,” said Ms. Greenstein, whose state has a so-called “trigger law” that would immediately ban abortion if Roe v. Wade were overturned. “There is so much on the line.”

The modern abortion rights movement grew out of the women’s rights movement of the 1960s, said Alesha Doan, 48, a professor at the University of Kansas and the author of “Opposition and Intimidation: The Abortion Wars and Strategies of Political Harassment.” In the early days, activists worked on passing laws at the state level, and talked about their experiences in consciousness-raising groups, Ms. Doan said.

After Roe v. Wade became federal law in 1973, the anti-abortion movement began to coalesce, adopting the tactics the abortion-rights proponents had once used. You can’t talk about one group without the other, Ms. Doan said: “They coexist, they learn from each other, and they respond and react to each other.”

Clinic escorts — volunteers who stand outside clinics and help patients enter safely — were not widespread until the late 1980s and early 1990s, said Shoshanna Ehrlich, 64, a professor of women’s, gender and sexuality studies at UMass Boston. “That really grew up in a very powerful way in response to the increased clinic violence” from abortion foes, she said, which included the murders of a handful of doctors who performed abortions, as well as other clinic workers.

The guiding philosophy for clinic escorts has always been to not be confrontational, Ms. Ehrlich said; they have seen their role more as human shields, protecting clients with their bodies, even if not with their words.

But while escorts still by and large take a nonconfrontational approach to dealing with anti-abortion protesters, so-called defenders, like Ms. Cueto, act more as counterprotesters.

And since the pandemic began, “we’ve seen an increase in harassment and attempted clinic invasions and people showing up to scream and protest and shout unmasked,” said Katherine Ragsdale, 62, the president and chief executive of the National Abortion Federation.

This is where clinic defenders and other more adversarial counterprotesters have stepped in. In general, young activists “are pushing forward with a more unapologetic voice,” said Alexis McGill Johnson, 48, the president of Planned Parenthood’s action fund.

Though Gen Z isn’t the first group to employ loud and unapologetic tactics — some older activists and writers, including Katha Pollitt, have been pushing these ideas for years — they may be doing it in larger numbers.

There is some evidence that a slightly greater percentage of Gen Z Americans support abortion rights than previous generations, and that those who support abortion rights feel more strongly about it, said Natalie Jackson, the director of research at the Public Religion Research Institute, a nonprofit and nonpartisan polling organization.

According to the nonprofit’s most recent survey, from 2019, 59 percent of Americans ages 18 to 29 say abortion should be legal in all or most cases, compared with 57 percent of the same age group in 2014. “Other age groups have not changed much since 2014,” the report noted.

What’s more, some activists in their teens and early 20s now reject the “safe, legal and rare” framing of abortion rights that was embraced by many in the 1990s, said Diana Thu-Thao Rhodes, 36, the vice president of policy, partnerships and organizing at Advocates for Youth. Gen Z activists “have really pushed for the issue as an intersectional issue. Your race, gender, sexuality, age — all of those contributing identities impact your access to care.”

A Shift in Strategy

Calla Hales, 30, the executive director of A Preferred Women’s Health Center (A.P.W.H.C.) in Charlotte, has seen the number of anti-abortion campaigners outside the clinic explode since 2015. She knows the history of the A.P.W.H.C. well, as her parents started the network of clinics in 1999 in Raleigh, N.C.

Before 2015, “on a weekday, we’d see five to 10 protesters, and on the weekends 20 to 30,” Ms. Hales said. In the past five years, there have been prayer walks outside the Charlotte clinic on Saturdays organized by a group called Love Life, involving as many as 5,000 people according to her clinic’s estimates, Ms. Hales said.

“In years past we have had several thousand gather for prayer and worship and celebration of life,” said Josh Kappes, the director of city development for Love Life. “This year was much less due to Covid.”

“This year, we continued our outdoor prayer walks offering masks and hand sanitizer in each participating city,” he said. “Love Life strongly encouraged social distancing and face coverings where they were mandated. We also encouraged virtual participation for at-risk family members, elderly and communities with community spread.”

In March, four men who are part of the Love Life organization were charged with violating a stay-at-home order in Greensboro, N.C. Ms. Hales, of the clinic, said it was not uncommon to see 90 anti-abortion advocates gathered outside the clinic on a typical day earlier this year when the state was much more locked down with coronavirus restrictions.

Local newspapers like The Charlotte Observer and The Queen City Nerve have been covering the clashes between abortion rights advocates and anti-abortion campaigners outside A.P.W.H.C. for years. Many involve disputes over noise ordinances. Anti-abortion campaigners have camped out on the land next door to the health center so they can “point their speakers toward the clinic while avoiding the need for a city-approved sound permit,” The Observer reported. In November, the anti-abortion group Cities4Life received a consent order from a federal judge which allows protesters to approach cars as they enter and exit the clinic’s driveway. Cities4Life did not respond to a request for comment.

Ms. Hales said that her parents “were very much of the ‘put your head down’ kind of crowd, a strategy favored by a lot of abortion providers,” which involved not confronting those campaigning against abortion. “That doesn’t work any longer when they’ve got the property next door and they’re coming in droves at a time.”

She said 2020 was also the first time a large number of people in their teens and 20s have been organizing outside her clinic. A media strategist for Charlotte for Choice who withheld her real name because she fears harassment from anti-abortion campaigners, said that since Ms. Cueto and others have been publicizing the organization’s work in providing clinic defenders and escorts, volunteers have tripled from 50 to 150.

Not everyone is happy with the new strategies, though. A handful of board members resigned from Charlotte for Choice in response to the more confrontational tactics adopted by clinic defenders this year, said Angela Blanken, 42, a founding board member who was among those who resigned.

While the anti-abortion protesters have always been noisy, Ms. Blanken said having counter-protests just added to the chaos, and made the experience worse for patients. “It’s just more noise outside your medical appointment,” she said. Referring to patients, she added, “they don’t know who is on their side and who’s against them.”

Ms. Hales disagrees that the patient experience has suffered. “As the executive director of the clinic who is more intimately involved with the ins and outs of the clinic, that has not been the case,” she said.

Ms. Cueto believes that adversarial methods are effective because they draw attention away from patients. “We’re making sure they’re focusing on us and arguing with us and how mean we are, and not focusing on trying to shout through the bush line and telling patients they’re murdering their baby and going to burn in hell,” she said.