A new unauthorized biography of Melania Trump is titled Free, Melania, and although the words refer to the left-wing fantasy meme that the first lady is a prisoner begging for liberation, the comma demands unpacking. Is it a stylistic choice? Is another word missing, i.e. "(Be) Free, Melania"? Did it mean to imply the first lady, like a garage-sale lampshade, is available to a good home? "Free: Melania."

The title is inscrutable, and so is the first lady, even after one reads this book, which was written by a reporter who has more insider knowledge than most: CNN's Kate Bennett, who is the only member of the White House press pool dedicated solely to Melania coverage. She's dined with her, traveled with her, interviewed her, interpreted her. 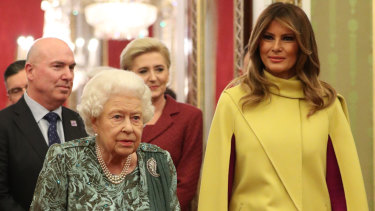 She is difficult to read, says her biographer, but her choices are not random.Credit:WPA Pool/Getty

And so we now have 267 pages detailing what was going on in Melania's world during her most buzzed-about moments, from swatting away President Donald Trump's hand as they walked down a red carpet in Israel to her office flamboyantly calling for the deputy national security adviser's resignation.

Because FLOTUS didn't formally participate in this book, much of the content is a writearound – the journalistic term for relying on other people's accounts when your subject won't talk. And some of it is speculation: the particular blend of body-language analysis, clothing-choice analysis, telepathy and tea-leaves reading that go into so many discussions about Melania Trump.

After years of examining the first lady, for example, Bennett has concluded that there are no sartorial "coincidences" when it comes to Melania. She believes Melania's suffragist white suits are intentional. Melania's "pussy bow" blouse, famously worn after the release of President Trump's leaked "Access Hollywood" footage, was intentional. Pants? Intentional, and potentially chosen to stick it to her husband on occasions when the first couple are arguing: The president prefers women in dresses. 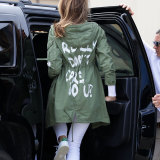 The jacket that launched a thousand questions, but no definite answers.Credit:Getty Images

When Melania visited a camp of imprisoned migrant children wearing a Zara-brand jacket emblazoned with the phrase, "I really don't care, do u?," (right) Bennett posits that this was intentional in a way nobody had even begun to fathom: the message wasn't referring to the situation at the border, as Melania's detractors had accused, nor to negative press coverage, which was the explanation put forth by Melania's camp.

Rather, the jacket was a message for … Ivanka Trump? Ivanka is the Zara fan, Bennett argues, and the jacket was Melania's way of taunting her for trying to take credit for pushing her dad to end family separation.

But then elsewhere in the book, Bennett acknowledges the limitations of this kind of speculation, warning Instagram users against attempting to glean too much meaning from Melania's personal social media posts. "To read into these glamour shots is an exercise in futility," she writes. "A picture of her ponytail, captioned 'Thursday,' is probably just that: a picture of her ponytail on a Thursday."

Is there symbolism in everything Melania Trump does, or not? Is Melania Trump playing five-dimensional chess against the rest of her checkers-playing family, or not? Will we ever know? Does it even matter? Does your pointed commentary about the administration's immigration policy matter, if, to understand you've commented at all, the American public must intimately know the shopping habits of your grown stepdaughter? 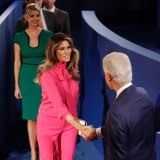 “That’ pussy bow … and pants.Credit:AP

Truly, which is the more unsettling interpretation of Melania Trump? That all of the odd stuff she's done has been intentional, but she's bizarrely choosing to communicate in fashion code, rather than to communicate using any one of the five human languages she speaks? Or that she has no plan at all – that she wakes up and throws on pussy bows and sloganed jackets, and nobody surrounding her thinks to say, Hmm? That the rest of the country is merrily rolling toward pandemonium, and meanwhile she's again planning her holiday decorations six months in advance?

A job requirement of models is the ability to disappear: to sublimate one's own identity into the clothing so that the shopper can picture herself wearing it instead. Melania Trump's greatest achievement has been her self-sublimation, her ability to let people project their own worldviews onto her. Conservatives see a classy helpmeet, bringing old-world elegance to the White House. Liberals, zeroing in on her initial New York home base and her thirsty eyes toward Justin Trudeau, proposed for a while that she might loathe her husband as much as they did.

But then she moved to Washington. Then she stayed with her husband. Then she wore suffragist white, then she launched a grammatically weird initiative – "Be Best" – and then she never fully developed that initiative, and then she was hugged by children in Bethesda, Maryland, and booed by children in Baltimore, and we haven't even begun to talk about how every year her Christmas decorations are simultaneously beautiful and also like the setting of an Agatha Christie novel where the murder weapon is an icicle.

Is Melania Trump playing five-dimensional chess against the rest of her checkers-playing family, or not?

Through all of the chaos, Melania's impassive stillness has led folks on both sides of the aisle to see her as a beacon of hope. She smiles, and think pieces are born. She frowns, and the think pieces have grandchildren. That's fine. Presidential spouses should be watched and wondered about, but there's a difference between exploring what a first lady's behavioral and fashion choices communicate to the world and presuming to know what's in her head.

Decrypting Melania's head space is a dodgy game. If she's sending messages, they're so subtle, they might as well be Morse code wrapped in semaphore filtered through hieroglyphics and the dead languages of our forefathers eight generations back. Our attempts translate them says more about our own wants and needs than hers.

What if there was no meaning. What if we stopped inventing meaning.

Free, Melania. Free us all.