These ladies – who shot to fame long after they started collecting their pensions – would beg to differ.

‘If people don’t like swearing, they shouldn’t watch my videos’

Margie Keefe, 81, is better known as Grime Gran on YouTube. She lives in London with her daughter Nancy, 62, a teaching assistant, and grandsons Roony, 34, a filmmaker, and Beau, 29, who works for a railway company. 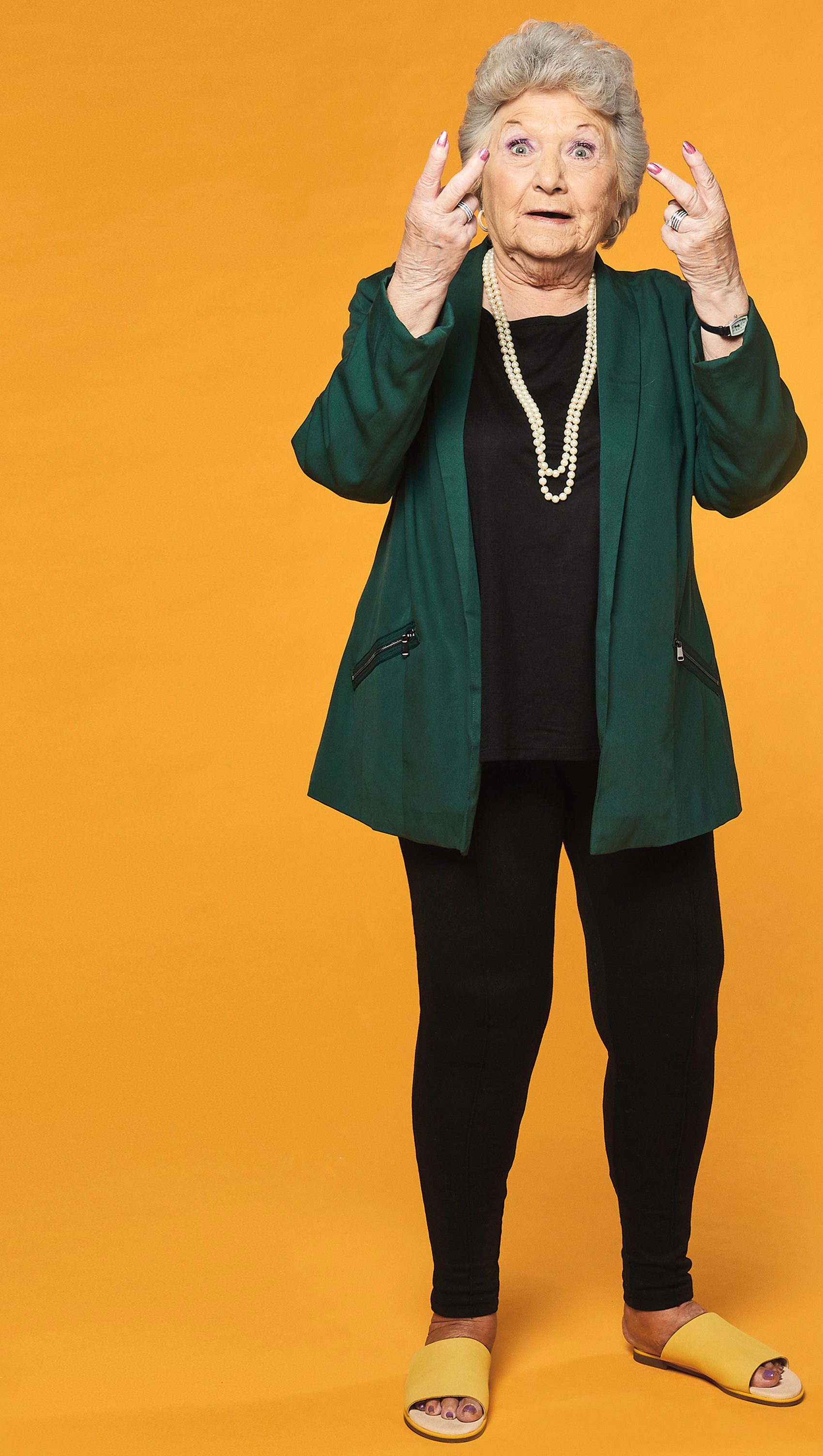 “As I settled back into my armchair, it was like any other day in the home I share with my daughter Nancy. My grandson Roony had a friend round, and as we chatted over a cup of tea his mate called me Nan, like all Roony’s pals do. Except I’m not your ordinary OAP – I’m a YouTube star and the friend Roony was about to film me talking to was grime star Lethal Bizzle.

Before I became famous, I was married to Terry, a brewery manager, but he passed away 31 years ago, aged 52, of pneumonia. I used to work as a dinner lady in schools, but I had to retire at 55 because of my arthritis. Never in my wildest dreams did I think I’d become a social media star.

Roony has been filming grime stars since 2004 under the name Risky Roadz, after I lent him £300 to buy his first video camera. He turned out to be really talented and has made videos for famous MCs including Skepta and Kano. His video for Skepta’s single Man won Best Video at the Rated Awards in 2016.

The boys would always be at our house – I’d have a chat with them and give them advice, like any nan would. They would always give me a kiss and were very polite and respectful.

A few years ago, Roony asked me if I’d like to be in one of his videos. He said he wanted to make a series called Grime Gran. He’d seen how well I got along with the boys, and I quite liked the music, but it wasn’t until April this year that I gave in. 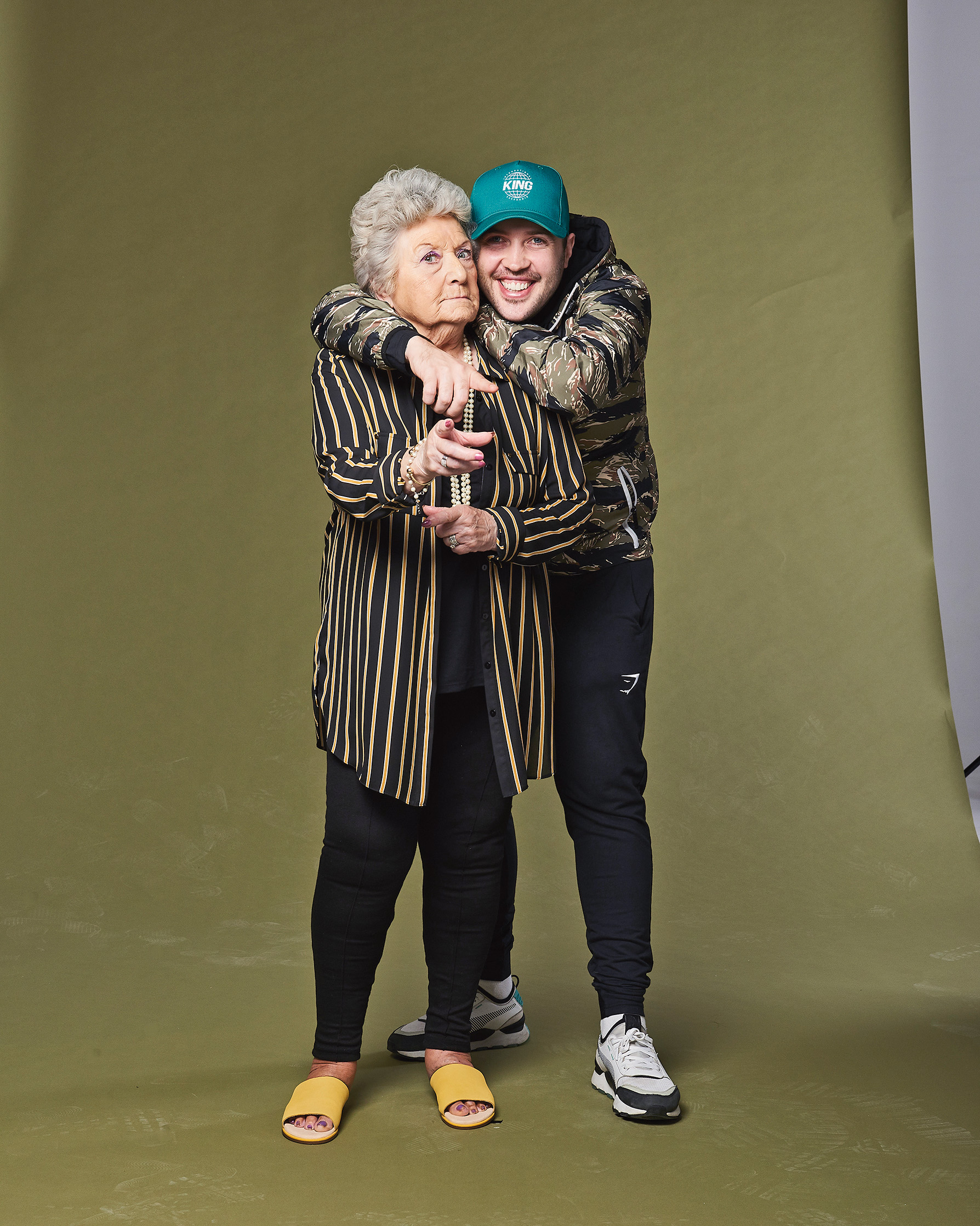 The first video I filmed was with a rapper called Ghetts. I felt a bit self-conscious at first, but then I forgot the camera was there. We just had a chat about his music and how he was getting on. I didn’t realise the videos would take off like they did. I’ve made six videos since then. Roony shows me them because I don’t know how to use a computer.

So far I’ve had 1.5 million views, and I think it’s because the videos are funny. I’m known for my swearing and I’m not afraid to say ‘f**k’ on camera. I don’t mind if the boys swear, either – everyone does it. If people are offended, they shouldn’t watch.

I’m often recognised in the street and it’s obvious people like the videos, and that’s because I’m being normal – I’m being me. I’d like to do one with Stormzy soon – I’ve not met him yet.

The videos have done so well that E4 has commissioned a series, which starts this month. I’ll watch it, but I prefer Emmerdale and Home And Away. I’m proud to say I’m a YouTube star. Not many grans can say that, can they?”

Buffy Davis, 75, is a model at Mrs Robinson Management. She lives in London with her husband Fred, 80, a retired university lecturer. She has children Dan, 50, and Stella, 35.

“As I walked through the pub doors for my son’s birthday dinner, my family had to look twice. I’ve never been one for make-up, but for once I was caked in it after taking part in my first modelling assignment at the age of 71.

I’ve always been very slim, but modelling wasn’t ever something I considered. When I was younger I didn’t have a long-term career plan. But after I’d had my first child Dan in 1969 I decided I wanted to do something with my life, so I started art college at Central St Martins in London.

I arrived at the same time as John Galliano on the first day and he told me he was really nervous. After that I became a professional artist, working under my real name of Liz Davis.

My niece Cindy Robins, 52, is a model, and she was the first person to suggest I think about modelling in 2015, when I was 71. She knew that an agency for older models, called Mrs Robinson, was running a ‘glamorous granny’ competition.

We sent in some photos of me posing in the garden, and though I didn’t win, the agency liked my look so much that it took me on. Fred and my kids thought it was hilarious. I decided to use my family nickname, Buffy, for my modelling work – it was what everyone had always called me, and Liz was only my name in the art world. 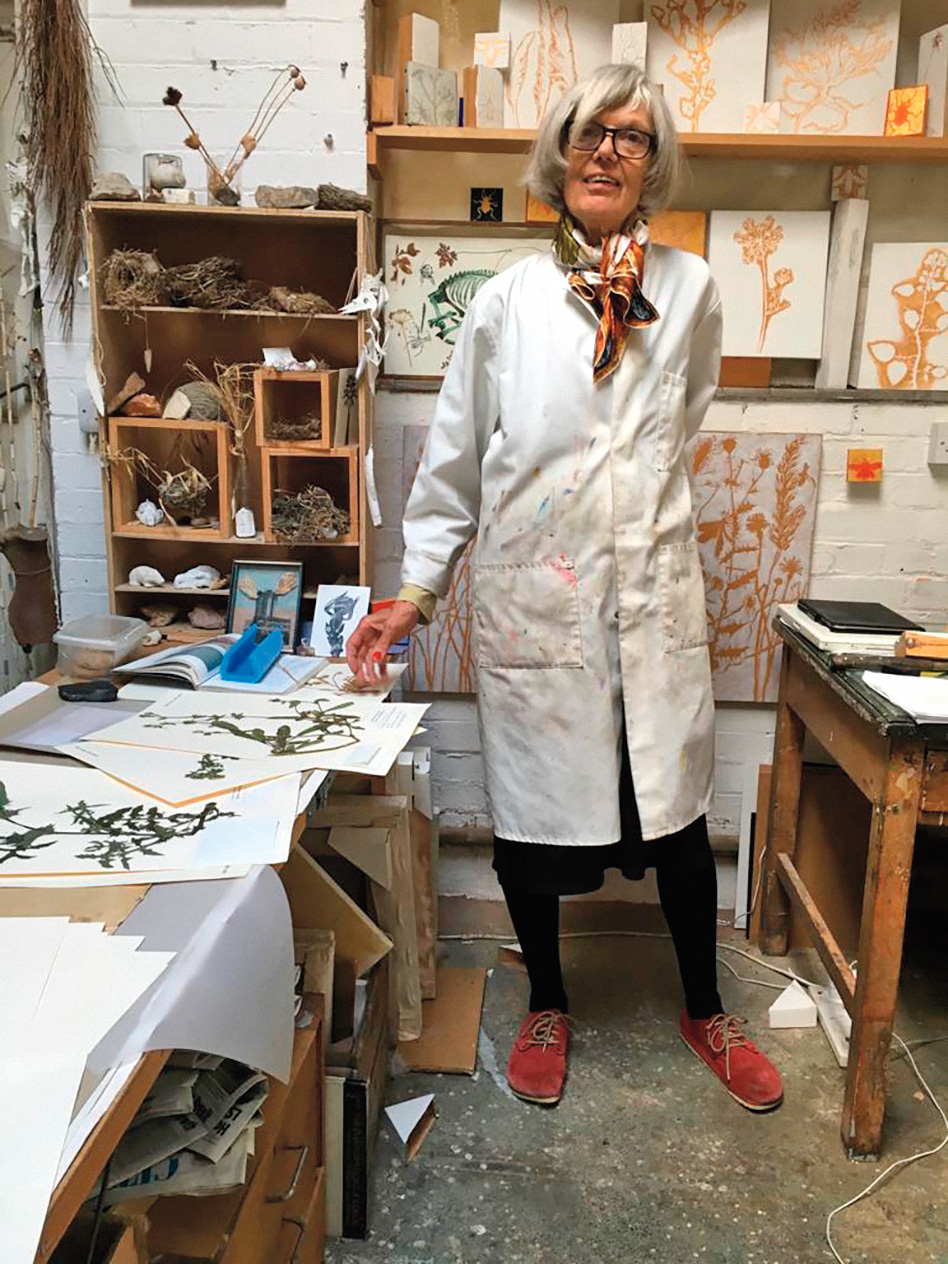 My first shoot was in October that year for The Guardian. I wasn’t nervous – I had to do public speaking as an artist, and I always enjoyed dancing, so I loved posing for the camera right from the start.

I’ve since done photo shoots for newspapers and women’s magazines such as Cosmopolitan and Woman & Home. The best one I’ve ever done was wearing Prada in the Financial Times in October 2016. I was given the role of ‘awkward granny’, and I had to model with a duck on my lap.

It was a Christmas shoot with beautiful, mad clothes. I wanted to take my outfit home, but I wasn’t allowed to. I like everything I model – there’s never been anything I’ve refused to wear, and I’d never say no, as it’s my job to turn up and wear the clothes.

I love being spoiled on set. People buzz around you, offering coffee and croissants. I’m told to sit down and put my feet up in between photos and I get my hair and nails done – it’s fabulous. I do get a little bit tired when I’m working, but I’m still OK to get to shoots on my own – I just hop on the Tube. I haven’t done a catwalk yet, but I would if I had the chance.

I haven’t had time to get old yet. I go to my painting studio almost every day – my next exhibition is in Moscow – and I play the piano. My friends from art college are all 10 years younger than me and I see them all the time, so I feel like I’m 65 not 75. I think going to the shoots and meeting all these young people has kept me youthful, because it’s shown me a different side of the world that I’d never have otherwise seen.”

‘I wanted an adventure after my husband died’

Sue Moore, 71, is an actress and lives in Northumberland. 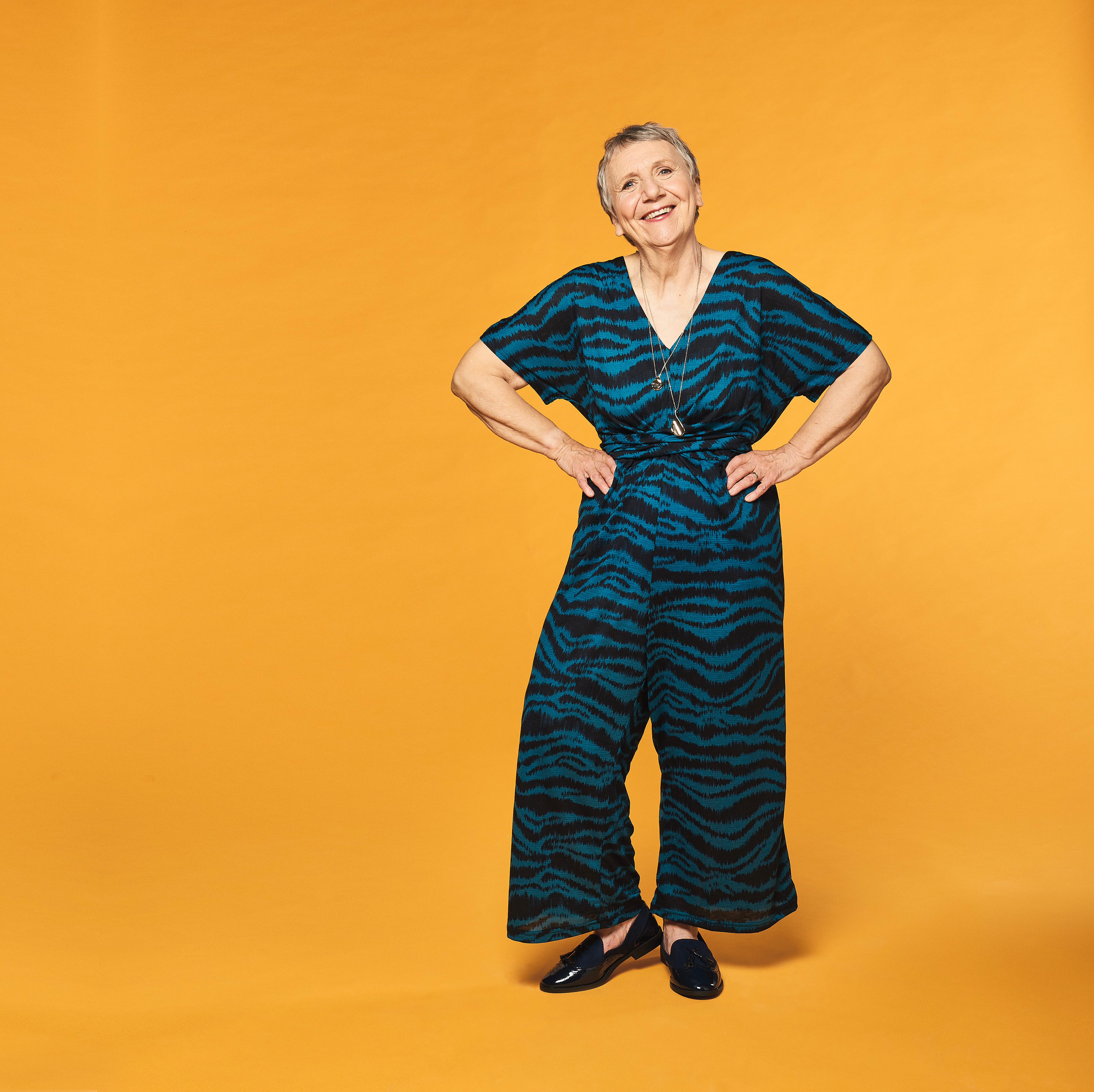 “I clutched my chest as blood from the gunshot wound seeped through my hands. Fortunately I hadn’t really been injured – I was on the set of a futuristic cowboy film playing the role of ‘gun-toting granny’.

After finishing school in 1964 at the age of at 16 I wanted to join the Royal Navy submarine fleet, but women weren’t allowed to in those days so I went into the army, working my way up to the rank of corporal in the Women’s Royal Army Corps.

I spent two years in West Germany during the Cold War, and learned to ski with the army. Once, close to the East German border, we saw guards peering at us from watchtowers clutching guns – it was very scary. When I left the army in 1970 I went into IT, first working for the police and then for my local council in Melton Mowbray, and in 1975 I married my husband, Stephen, who worked in communications for the police.

In 2010 Stephen developed prostate cancer, which spread to his bones. It was very sad, and he had a terrible time of it. When he passed away from cancer three years later, aged 67, I vowed to do something exciting as it was just me and the cat at home, and I’d retired the same year, which I found really boring. 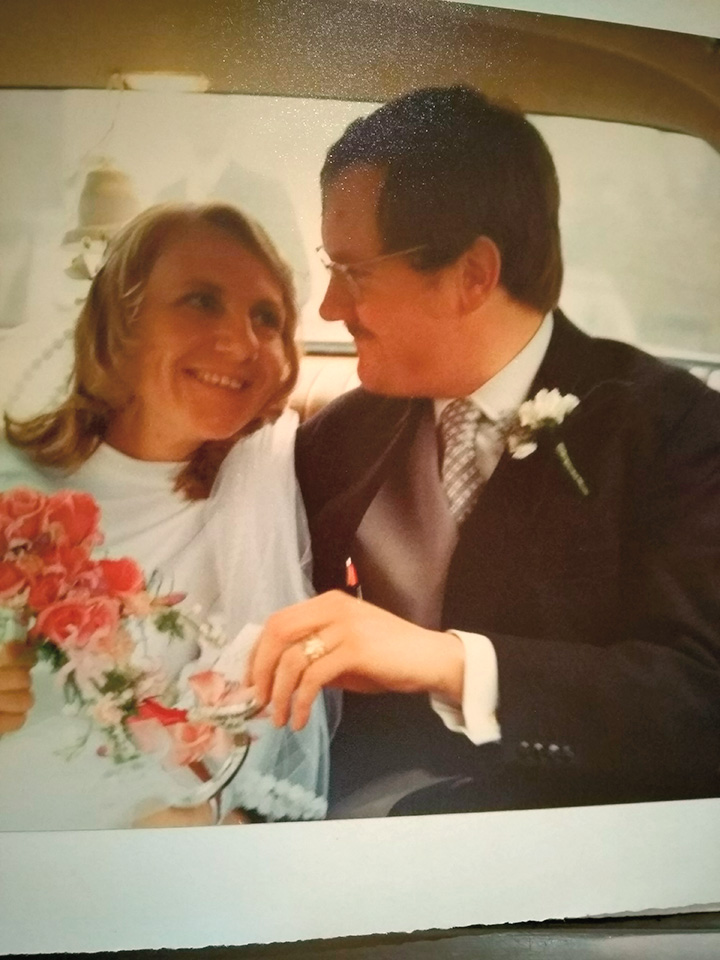 I considered doing a plumbing or bricklaying course, but then settled on acting – it was something totally new. In September 2013 I enrolled on a professional diploma at The Birmingham Theatre School, making the 120-mile round trip every day from Leicestershire, where I was living at the time, in my car.

At 66 I was the oldest person on the course (the next oldest was 22) and walking in on my first day was terrifying. But everyone was very welcoming, and I began to enjoy myself, though I found learning lines difficult because my memory isn’t as good as it used to be. The teacher decided I wouldn’t take the stage-fighting exam, either – the young people were far too quick for me.

We did three plays a term, including Shakespeare, and I loved every second. Life was fun again, and I felt that I had a purpose. When I finished the course in July 2014 I had a showreel done, and I met with an agent from International Actors London, who liked my clips and signed me up. I’ve been with the agency ever since.

So far I’ve done a film called Do Something, Jake playing the role of ‘grumpy old woman’, and a film called Dusk, with Duncan James from Blue, in which I played a transgender man. Both films had premieres at posh London hotels, which I loved.

The paparazzi were there and soap stars, though I didn’t recognise any of them as I don’t watch soaps. I’ve also acted in the Netflix series Nurses Who Kill, and Once Upon A Time In Winchester, the short film I got shot in. The great thing with film is that if you make a complete hash of the lines you can do another take.

At my age I haven’t got many relatives left apart from my two brothers, Roger, 78, and David, 68. My nephews and great-nephews don’t know quite what to make of my new career – they probably think I’m slightly mad!

Acting has been one of the best things I’ve ever done. The older you get, the more adventures you should have – it makes life exciting. I don’t want to sit and look at four walls, knitting. I’ve got better things to do! And even if it doesn’t work out, I’ve tried it. And then I’ll try something else.”