When Jack Carlson wears his mom’s old green Lehman Brothers sweatshirt around New York City, people try to buy it off his back.

“People will just come up to me and offer me money for it in restaurants,” said Mr. Carlson, 33, the founder of the clothing company Rowing Blazers, which sells a contemporary version of the so-called banker bag, a Wall Street accessory that dates to 1978. Branded merchandise of defunct investment banks that were key architects of the financial crisis in 2008: officially hot, if in an arch, allusive way.

Buying and selling products associated with the crash has become, paradoxically, a thriving niche market. So too has memorabilia associated with other disasters in recent financial history, like the dot-com bubble and the Enron scandal.

In a Bloomberg article in which financial experts described how they would personally invest or spend $1 million, Akshay Shah, the founder of the investment firm Kyma Capital, said, “When businesses go bust, they leave behind reminders of corporate power and the effects of time.” eBay sellers, he noted, have scooped up branded items and then offer them for sale “at a pretty substantial multiple after a suitable passage of time — like the $500 Lehman sticky notes.” (Sounding a note of caution, Mr. Shah said, “The key to success here would be volume of products and being patient.”)

These days, however, there are also more affordable items on hand, a Lehman Brothers-branded baby bib ($59.59 on eBay) and an emergency evacuation kit ($98.99). A Shearson Lehman Brothers Holdings Inc. certificate dated to 1987 will set you back $295, however — even though the stock it once represented is worth nothing. And an Enron “Conduct of Business Affairs Booklet” is on sale for $395 on the “stock market gifts and collectibles” website Wall Street Treasures.

“I’ve been selling a lot of Enron memorabilia lately,” said Scott Davidson, 38, an accountant and financial planner who runs Wall Street Treasures, and has been selling finance-related memorabilia through various channels for nine years. “There’s a lot of appetite. Everyone loves a good scandal.”

Among the current items Mr. Davidson has in stock is a framed promotional piece that displays a “Most Innovative Company” Award that went to Enron four years in a row. It’s now on sale for $1,495. “Of course, the only innovative thing about them was their accounting scheme,” he said. “The innovation was the fraud.”

In a disorienting boomerang of value, a once-valuable stock certificate becomes totally worthless, and then, in an afterlife as a collector’s item, becomes more valuable than it was before. Why, one might ask, is anyone buying this stuff? Financial scandals and crises, which left millions impoverished, might seem like odd fodder for office décor or workout sweatshirts.

“I think it partly has to do with collective identity,” Mr. Davidson said. “So many people owned a piece of Enron at one time, through their mutual funds. Everyone knew the story.” Personal identity is part of it, too; he often gets contacted by former employees of defunct companies looking for souvenirs of their time there. 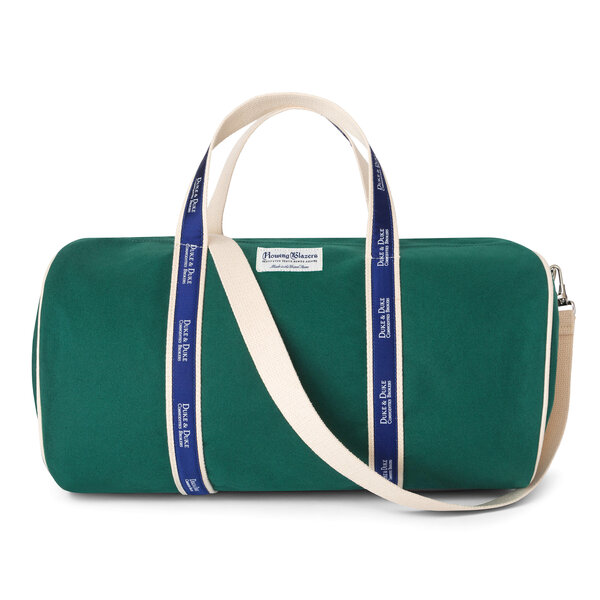 The popularity of these cultural artifacts has led to a whole subgenre of new offshoots and homages, like Rowing Blazers’ banker bag. There are two versions, emblazoned with “Duke&Duke Commodities Brokers” or “Pierce&Pierce Mergers and Acquisitions” — both fictional firms from movies.

To produce it, Mr. Carlson worked with Warden Brooks, the company founded by Joan Killian Gallagher that made the original canvas bag in 1978, which came to telegraph “New York finance” in the 1980s and 1990s. “It has been a staple for interns, IB conferences, special events, elite clubs, associations, university and prep school reunions, off-site meetings, corporate programs and incentive groups,” Warden Brooks’s website proclaims.

The Rowing Blazers version ($135) is one of the company’s most popular items. “The banker bag is such a polarizing object,” Mr. Carlson said. “For some people it’s this really important status symbol, and for others it’s kind of a symbol of everything that went wrong.” Rowing Blazers also makes a yellow hat ($48) that reads “FINANCE,” in black letters — which is, he said, the best-selling object on the site.

Sometimes people wearing FINANCE hats are simply people who work in finance and think finance is cool, Mr. Carlson said. But perhaps more often it’s an ironic gesture. “The people who are buying the hat, or the banker bag, are not necessarily people who are idolizing these extinct financial institutions,” he said. “There’s almost like a sense of appropriation or a sense of empowerment that comes along with it.” (Someone who works in finance did once email Mr. Carlson to accuse him of appropriating financial culture, he said.)

The popularity of these items has surprised him. “I really did not expect this to take off like that,” he said. “It’s so bizarre.” Occasionally Mr. Carlson will sell vintage items, like a knitted Merrill Lynch sweater emblazoned with bulls that went for $300 to $400, but they go out of stock very quickly.

This buying and selling of finance-adjacent memorabilia is a cousin of scripophily, the collecting of stock certificates: a niche hobby among, mostly, financial professionals and history buffs. Paper stock and bond certificates, which are being phased out of circulation, are often highly decorative. Bob Kerstein, 68, founded scripophily.com, the primary website for buying and selling stock and bond certificates, in 1996. He now has roughly 14,000 of them on the website, ranging from stock certificates for 19th-century mining companies to Ask Jeeves stock issued in 2001, with Jeeves himself on the top.

“The financial crisis is one of our biggest sellers right now,” Mr. Kerstein said. “We have mortgage obligation bonds on our website, and people like those a lot, because that was really the starting point of the Great Recession.” When he first started, he said, collectors were most interested in the older certificates but now, “railroads are deader than a doorknob,” he said. “Modern certificates are more popular.”

Other popular items include Trump-branded stock certificates, and those for defunct dot-com companies. Even the names of companies, like MP3.com and Fashionmall.com, can instantly conjure stories about the overspeculation that happened in the heyday of the early web, when it seemed like almost everyone with a website could find investors.

“Having one of these on the wall in your office can be a reminder that in the stock market you can make a lot of money, but you can lose a lot too,” Mr. Kerstein said.

The idea that objects can impute lessons about the follies of money management is not a new one. William Goetzmann, a professor at the Yale School of Management, is the co-author of the book “The Great Mirror of Folly: Finance, Culture, and the Crash of 1720,” inspired partly by memorabilia of the first great stock market crash.

This crash, popularly known as the South Sea Bubble, inspired a range of scrapbooks and satirical drawings that pointed to the absurdities of speculating. Playing cards even emerged out of this crash printed with satirical drawings; people may well have gambled with cards that poked fun at the feverish atmosphere of trading and speculating that led to the crash.

“Saving the artifacts from stock market crises is about more than just saying, ‘We want something to remember it,’” Mr. Goetzmann said. “It’s about having something that you can use ironically or satirically to force yourself to realize that human behavior can lead to these crises.”

This seems to be part of what’s at work in the obsession with Lehman Brothers and Enron memorabilia — not just memorializing scandals or crises, but also processing them through irony. Sometimes that means buying and selling in a mode of speculation that mimics the very thing you’re mocking.

Or, sometimes it’s simpler than that. As Mr. Davidson said, “What else are you going to get your financial adviser?”