Rarámuri women in Chihuahua, Mexico, have made an indigenous style of dress a means of fighting assimilation. 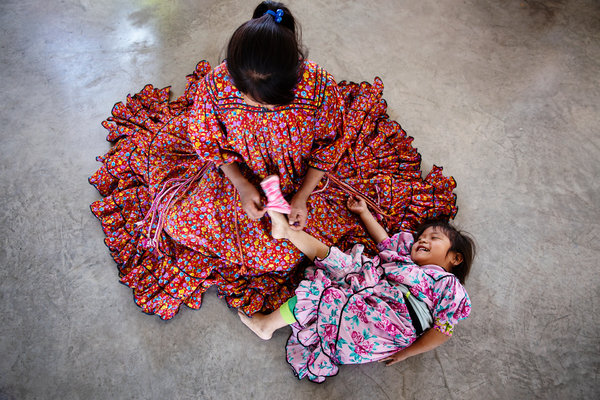 By midmorning on the Wednesday before Easter, the desert sun was gaining strength in Chihuahua, Mexico. So was the deep sound of beating cowhide drums in Oasis. This settlement, situated in the working-class neighborhood of Colonia Martín López, is home to approximately 500 Rarámuris, commonly known as Tarahumaras, an indigenous people who are fleeing drought, deforestation and drug growers in Sierra Madre.

In the city, their displacement is marked by other forms of hardship, which are magnified by the way the Rarámuri stand out.

The women dress in bright, ankle-length frocks — and often spend afternoons sewing traditional Rarámuri dresses — despite pressures from the people of mixed race who comprise most of Mexico’s population to assimilate with Western style. For Rarámuri people, assimilation is the same as erasure. But there’s a pervasive idea among many in Mexico that progress is dependent on severing ties with the country’s indigenous history.

Yulissa Ramírez, 18, wants to challenge that notion. She plans to attend nursing school after she graduates from high school, where the customary uniform is white scrubs, but hopes the program will allow her to wear a traditional white Rarámuri dress. “Our blood runs Rarámuri, and there’s no reason that we should feel ashamed,” Ms. Ramírez said, speaking in Spanish, as she held her infant son.

Her mother, María Refugio Ramírez, 43, sews each of her dresses by hand, following a dressmaking tradition that dates back to the 1500s, when Spain invaded the Sierra Madre mountains. Throughout the 1600s, Jesuit priests compelled Rarámuri women to wear dresses that fully covered their bodies. Over time, Rarámuri women adopted the cotton fabrics brought over by the Spaniards and made the dresses their own by adding triangle designs and colorful borders. Today they continue to hand-sew the bright floral garments, which stand out when the women venture beyond the Chihuahua state-funded settlement and into the urban landscape of gray concrete buildings and throngs of people in bluejeans.

Their unwillingness to conform with contemporary style has, at times, come at the cost of economic advancement. But some women seek to challenge that notion. Ms. Ramírez, for example, believes that completing her nursing program in traditional dress will be an important statement that Rarámuri people are a vital part of Mexico’s future — and present.

Other Rarámuris are monetizing their craft. For example, Esperanza Moreno, 44, embroiders tortilla warmers, aprons and dish cloths with depictions of Rarámuri women in traditional garb, and sells them to Mexican nonprofits who then resell the items to shops and Walmarts throughout the country. Rarámuri women have begun sewing traditional dresses to sell, as well.

On Holy Thursday, Ms. Moreno had taken the day off from the workshop outside the settlement where she sews modern-day garments that incorporate Rarámuri designs. The job provides a steady income for Ms. Moreno, whose husband is a contractor whose jobs often take him outside Chihuahua. It’s a line of work that has led to the kidnappings of some Rarámuri men; in vehicles that look like work-site shuttles, they have been taken instead to labor in marijuana and poppy fields, sometimes for entire seasons, leaving their families concerned for their safety and often without a source of income.

Ms. Moreno sat on her front stoop playing with her 1-year-old granddaughter, Yasmín, who took a few unsteady steps before turning to smile at her grandmother. She began sewing dresses for Yasmín soon after she was born. It’s important, she said, to pass along the dressmaking tradition to new generations of women. “We want to be seen as Rarámuri,” Ms. Moreno said.

Craft-making and her current job in the workshop are a means for Ms. Moreno to provide her family with the income necessary not only to buy food and pay utilities, but to uphold Rarámuri traditions. Fabric and sewing supplies for a Rarámuri dress can cost upward of 400 pesos, more than some families earn in a month.

There are efforts within the community to help Rarámuri women achieve a sustainable income while keeping their dressmaking tradition alive. In 2015, Paula Holguin, 46, with the support of the state government, began training 30 Rarámuri women to work on sewing machines in a large, spacious workshop inside Oasis. The state government had recently completed construction of the space — a project that aims to give Rarámuri women a chance to earn a living creating commissioned garments.

While Rarámuri men discard their traditional shirt, cloth and sandals upon arrival to the city in order to obtain jobs in construction, Rarámuri women rarely trade their dresses for the uniforms required by employers. “I only wear Rarámuri dresses,” Ms. Holguin said, echoing the thousands of Rarámuri women who strive to keep not only their dress, but their people’s ways of caring for the natural world and one another. To supplement the men’s income, Rarámuri women sell crafts and ask people on the street for “korima” — their word for reciprocity — at busy intersections throughout Chihuahua. But they earn little money this way, and expose themselves and their children to heavy traffic, insults and threats.

Ms. Holguin runs her own sewing workshop, or taller de costura, where she hopes to attract enough clients so that each Rarámuri seamstress can earn money in a safe work space, without sacrificing her traditional dress and time with her children.

Ms. Holguin used to take her daughters to sell crafts, candy, or ask for “korima” on the streets of Chihuahua. “Sometimes I was treated badly,” Ms. Holguin said. “Not everyone is a good person.” An avid runner, as so many Rarámuri are, she displays in her kitchen a dozen medals won in marathons held in the Sierra. (She runs in traditional dress, as well.) Her conviction that Rarámuri women should be proud of their heritage drives her to petition the government for support and rally the women around this new business venture.

But gathering clients has proved to be a challenge. A large project, like the request for 2,000 bedsheets from a nearby hospital, kept the women busy for months at a time. Long spells with little or no work often follow. Low pay, too, keeps women working in the busy city streets. “If there’s work in the workshop, the women don’t go to the street. They sell on the street if they don’t have work,” said Ms. Holguin.

Still, Ms. Holguin was hopeful that the workshop would provide Rarámuri women with the opportunity to attain visibility as seamstresses with varied skills. She travels frequently to Mexico City to speak at government forums about the workshop and the importance of Rarámuri culture.

In 2018, when president-elect Andrés Manuel López Obrador was visiting Chihuahua to meet with state officials, Ms. Holguin and a small group of Rarámuri women and government officials greeted him on the streets with calls of “AMLO, support Rarámuri seamstresses.” Mr. López Obrador, who was promising to uphold indigenous rights as part of his presidency, ignored throngs of reporters to speak to Ms. Holguin and a few other Rarámuri women about their employment of Rarámuri women as seamstresses. In the end, though, government officials in high offices did not offer the support that Ms. Holguin hoped for. “No one helped us, not the president or the governor. Only clients have helped us,” Ms. Holguin said. She also credits Rarámuri women and the local officials who have supported the workshop. “Together we have lifted up this workshop,” she said.

In the face of historical violence, assimilation might appear to be a path toward economic progress, protection and safety. But to the Rarámuri women, making and wearing traditional dresses is nonnegotiable. Even Rarámuri women brought up under the influence of Chihuahua’s urban culture, and who mix elements of Western dress like metal hoops and plastic necklaces, continue to wear traditional dresses for daily living and special occasions. The dresses are not only a marker of Rarámuri identity, but protest.

“This is how we were born, and this is the way our fathers and mothers dressed us,” Ms. Holguin said. “We haven’t lost our traditions.”

Malin Fezehai, a visual reporter for the Surfacing column, has worked in more than 30 countries. Her photographic work has the common denominator of displacement. @malinfezehai • Facebook