A BRIDE has been slammed for requesting gift cards for her bridal shower without having an actual event.

A photo of the divisive invitation was shared on Reddit by an upset guest who said they were “invited to a gift giving event minus the event”. 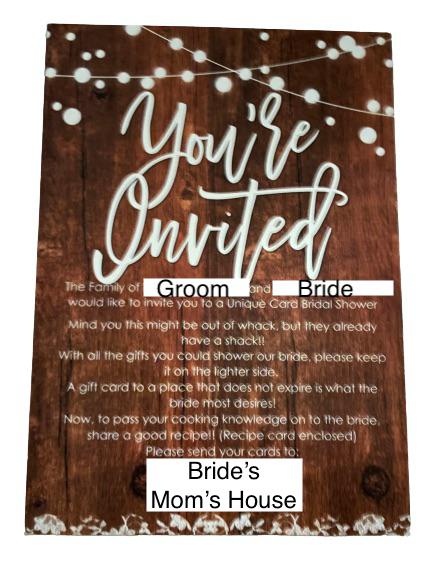 The invite blurred out the names of the people involved, but said: “The family of the groom and bride would like to invite you to a unique card bridal shower.

“Mind you this might be out of the whack, but they already have a shack!

“With all the gifts you could shower on our bride, please keep it on the lighter side.

“A giftcard to a place that does not expire is what the bride most desires.”

The invite also asked guests to include their favourite recipe for the bride to keep.

Many people were shocked that the bridal shower wasn’t actually an event, and the engaged couple had instead asked for presents.

One said: “That’s tacky as hell. If I get an invite to anything, they are getting a gift or something. Could be a friend I haven’t talked it in 20 years.

“However, if someone wasn’t just announcing the wedding and asked straight up for presents without an invite to something. No way in hell.”

Another added: “My friend did this for her baby shower. I had to send out just gifts card.”

A third commented: “Super tacky. This is an exchange – I attend a party, you get a gift.”

And one wrote: “I didn’t understand for so long until I realized there was no time or date for the party. I interpreted the address as the location. I didn’t realize they literally just want people to mail them money!”

Previously, a mother-in-law wore her old wedding dress to a bride's ceremony.