How the pomp and pageantry of Victoria’s Secret worked for so long. 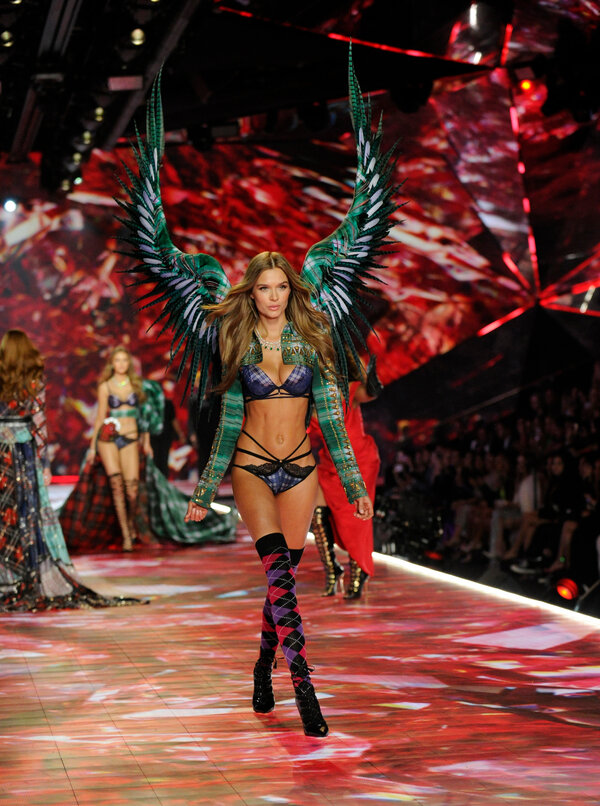 Ever since the news broke that Victoria’s Secret, the lingerie behemoth and Barnum & Bailey of fashion shows, was retiring its bevy of “Angels” in favor of a diverse posse of women with equally diverse resumes, media has been full of gleeful “it’s about time” responses, as well as photos of then and now, taking us down a memory lane of cleavage, costume and sex kitten cliché.

On this side of the #MeToo and recent social justice movements, the imagery that drove Victoria’s Secret to record profits and viewership — and made its favored models part of pop culture — seems not just retrograde but practically unimaginable, like coming upon some lost civilization buried beneath a dusty mound of garter belts and thigh-highs.

Here, for example, is an image of Heidi Klum from 2003 in 12-foot-high fluffy white wings, crystal-studded white push-up bra and panties and ankle-strap white stilettos, with a matching white choker, sort of like a dog collar, around her neck; there are Gisele Bündchen, Karolina Kurkova and Alessandra Ambrosio in fur-trimmed white knickers, bras, hoods and knee-high spike boots in 2005, channeling Santa’s naughty little helpers. 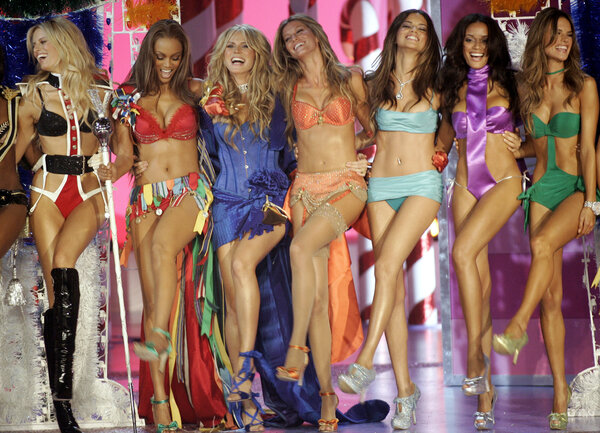 Here is Ms. Klum again in 2008 with a gigantic sequin bow on her back and diamanté chains around her very tiny crimson undies set; there is Isabeli Fontana in 2010 in a metallic weight lifter uni and silver bra, toting a pair of dumbbells. Here is Karlie Kloss as a sexy sea horse, Adriana Lima as a sexy superhero and Joan Smalls as a sexy tiger jumping through … a fake fire hoop?

But before we dismiss this pageantry as an embarrassing blot on the collective culture, perhaps we should ask a different question: Why did it work for so long in the first place?

At its height, after all, the Victoria’s Secret fashion show, which lasted from 1995 to 2018, was broadcast in more than a hundred countries, seen by millions around the world and helped drive almost $7 billion in annual sales. The company invested hefty amounts of capital to buy legitimacy in the fashion world — and in the eyes of those who followed the industry.

Before cruise fashion shows traveled the world, Victoria’s Secret shows traveled; when the runway show touched down in France in 2016, it was held in the Grand Palais, the locale normally reserved for Chanel. Olivier Rousteing (of Balmain), Clare Waight Keller (then of Chloé) and Riccardo Tisci (then Givenchy) were in the audience. Lady Gaga and Bruno Mars vied to perform. The fantasy bra and the wings were covered like actual industry news by Harper’s Bazaar, Vogue and Elle (and, on occasion, The New York Times).

At a time when actors were on the ascendant as magazine cover stars, being an angel was one of the most coveted gigs in modeling — not just among lingerie or Sports Illustrated models, but for those who already had a comfortable berth on the cover of Vogue.

“It was highly legitimate,” said Ivan Bart, the president of IMG Models and Fashion, the agency that represented Angels including Ms. Bündchen and Ms. Kloss. “A model would do their high fashion editorial, their runway, an ad campaign — and Victoria’s Secret.”

Yes, women actually wanted to strut down a catwalk looking like what may have happened if Big Bird had his way with a bordello. They actually wanted to be known (or at least were OK with being known) as Angels, a term the brand invented in 1997, which itself now seems utterly cringe-worthy, referencing as it does the Playboy stereotype of the good girl who is bad in the bedroom. It’s a trope that extends from “Dangerous Liaisons” to the librarian who whips off her glasses and lets down her hair to reveal she is actually a hottie. And it’s one that ignores the degree of effort involved in achieving the bodies required to participate in a runway show that often bore a disconcerting resemblance to soft-core pornography.

Though on one level it was about (of course) the next iteration of pinup culture as defined by, and catering to, men, the success of Victoria’s Secret, once a mere catalog company, was also the product of a host of cultural phenomena as fashion, entertainment, branding, sex and kitsch all began to merge at the turn of the millennium.

In some ways, the Victoria’s Secret Angels were part of the commercialization of the high/low moment that defined the cultural tenor of the late 20th century and is still going strong in collaborations everywhere. First captured by Kurt Varnedoe and Adam Gopnik in an exhibition at the Museum of Modern Art in 1990 (and an accompanying book), it was later appropriated by fashion designers including Tom Ford, whose 1996 breakthrough Gucci show married the irony of kitsch to luxury materials (remember the GG clogs?) and an unabashed embrace of Studio 54 decadence. It had an absurdist and knowing exuberance that appealed to both those who were intellectual slumming it as well as the mass market. Even the overt objectification and silliness of the show coordinated neatly with the “Sex and the City” energy percolating in pop culture.

By 2004, when Paris Hilton proved that a leaked sex tape could actually function as the route to legitimate fame and career, we were already being conditioned to peep into people’s bedrooms thanks to “Big Brother,” which made its debut on CBS in 2000.

At the same time, Victoria’s Secret understood the allure of the personal brand, hitting just at the moment before Instagram would transform the notion of fame. By naming its Angels and promoting them as people and stars in their own right — by actually media-training them — they gave models power, profile and security. All of which promised to serve as a springboard into the next stage of a career, not to mention making them more competitive with the actors who increasingly occupied the covers of glossy fashion magazines.

And Victoria’s Secret paid well: When Gisele Bündchen left the company in 2006, she was the highest paid model in the world, and, she told Refinery29 that Victoria’s Secret was 80 percent of her income. Little wonder the Angel ranks once included Karen Mulder (the first Angel), Tyra Banks, Naomi Campbell and Miranda Kerr.

“When I started,” Mr. Bart said, “I used to meet young women who wanted to sign with IMG whose dream was to be on the cover of Vogue. Then, somewhere in the 2000s, the dream became to be a Victoria’s Secret angel.” One model he worked with, he said, actually gave up the opportunity to walk a major Milan ready-to-wear show because she had been booked on a five-day Victoria’s Secret shoot.

By 2013, when WME, the Hollywood behemoth talent agency, bought IMG, the fashion and sports management company, part of the reason was that it saw the opportunity to develop fashion as entertainment. In 2015, its executives, Ari Emanuel and Mark Shapiro, were in the front row of the Victoria’s Secret show, taking notes.

The effect obscured the dark underside of the story: the crazy diets (no solid food for days before the show!) and fitness regimens (at least two workouts a day) that the models underwent in search of the elusive perfect body. (And there was that Jeffrey Epstein connection.) It pushed an unrealistic version of a woman’s body on the world.

That’s now over, which is not to say that that version of “sexy” has entirely disappeared.

Indeed, the kind of arch, knowing performance of exaggerated femininity that the Angels were created to embody has neither ascended to the heavens or been consigned to hell, depending on your point of view.

Rather it still exists in the drag community (where, arguably, the antecedents of the Angels could be found all along), packaged for popular and positive consumption in the form of such shows as “RuPaul’s Drag Race.” And strength of character has been given its due as a powerful form of seduction.

One that truly does have wings.