A COUPLE have been branded ‘scumbags’ after a woman claimed her boyfriend nicked a bouquet of flowers from someone’s memorial for her.

The woman shared a snap of the white and purple flowers on social media, seemingly impressed at her boyfriend’s gesture. 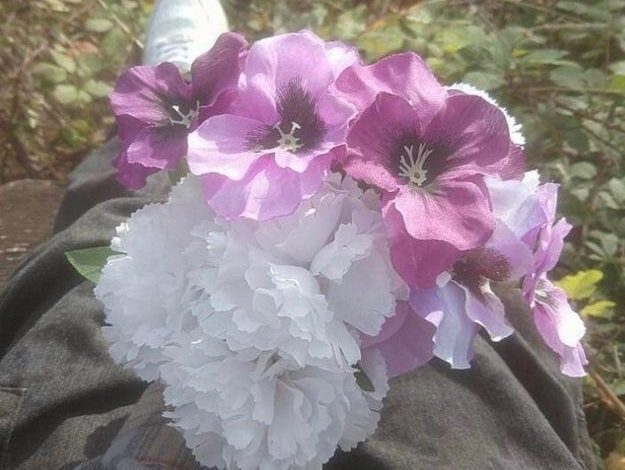 It's not clear whether she was pulling a prank, as she called their relationship “scumbag love”.

She said: “Only my boyfriend would steal flowers from someone’s memorial and give them to me."

The post has racked up hundreds of comments, where people shamed the couple for being ‘trash’.

One person said: “Oh my god. This is horrible.”

Another said: “This isn't what loving partners do, this is what lowlife pieces of trash do.”

A third added: “Well, at least she’s aware they’re both scumbags. That’s something, I guess.”

Someone else wrote: “Nothing says 'trash love' as fake flowers stolen from someone’s grave.”

This person said: “Do they pride themselves on having a "scumbag relationship.”

And this woman was roasted after revealing her boyfriend proposed using the ring he bought for his ex-girlfriend.

Plus this bride-to-be horrified people after making engagement rings – out of her boyfriend's hair.

Meanwhile this couple were slammed for updating their Facebook statuses in the middle of their wedding ceremony.