A MARRIED woman gets the best revenge on creepy guys who ask for photos of her boobs by sending them snaps of men’s bum cleavages instead.

Jennifer Sandbach set up a Facebook page called 'Jenni Vs Creepy Inbox Guys' after being swamped by chat up lines from strangers. 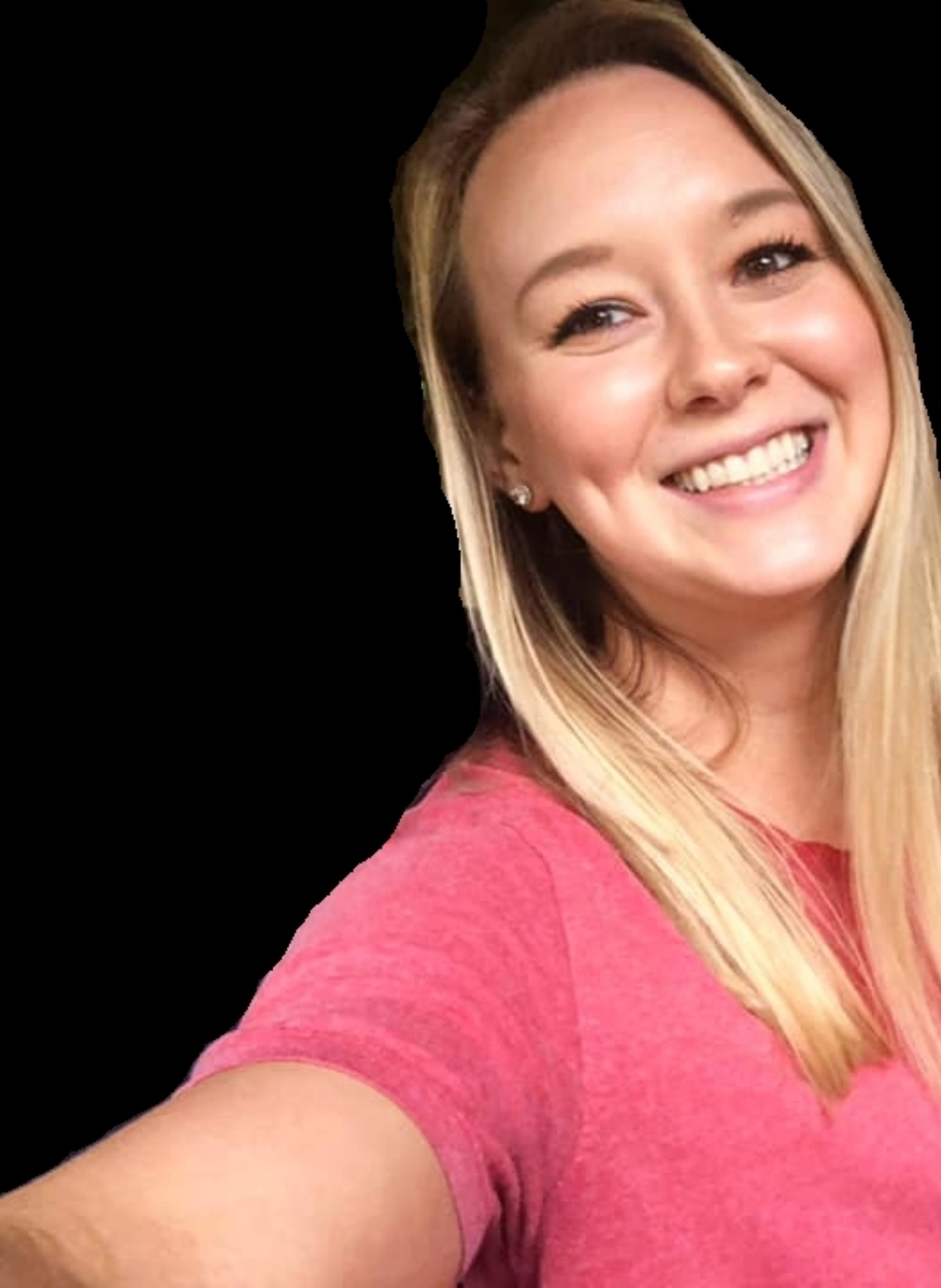 The 29-year-old, from Merseyside, says she gets bombarded with more than 50 explicit messages a week, so decided to publicly humiliate them by sharing their chats online.

Jennifer sends close-ups of men’s bottom cleavages to men asking for nudes, before revealing the entire image to the horrified creeps.

She said: “My absolutely favourite reply of all time is when I was sent a d**k pic and I replied, 'that d**k pic just gave me an STD'. He said, 'you don't get STDs from pics, stupid.'

"I said, 'I'm not talking about a sexually transmitted disease. I meant a Small Todger Disappointment'. That really cracked me up. 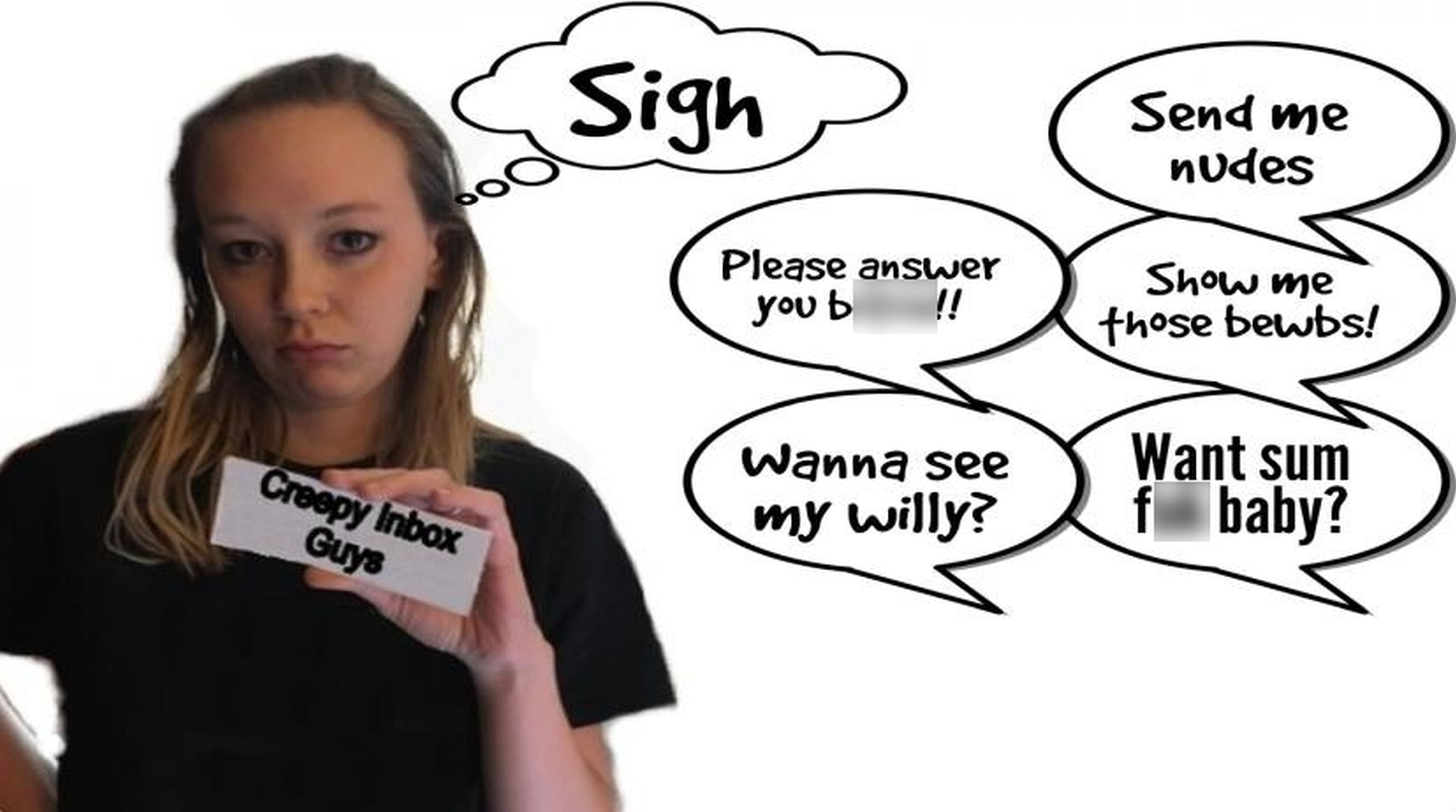 "I do save any photos I see on the net in advance that maybe have some use in following someone sending me unsolicited DMs.

"I found the guy's a**cheek picture made to look like cleavage online.

"But when it comes to my actual text replies, I'm pretty quick-witted and it's all done on the fly in response to how they reply and what is said to me first.

“I felt intense excitement, pleasure and satisfaction as I sent the first fake cleavage picture. 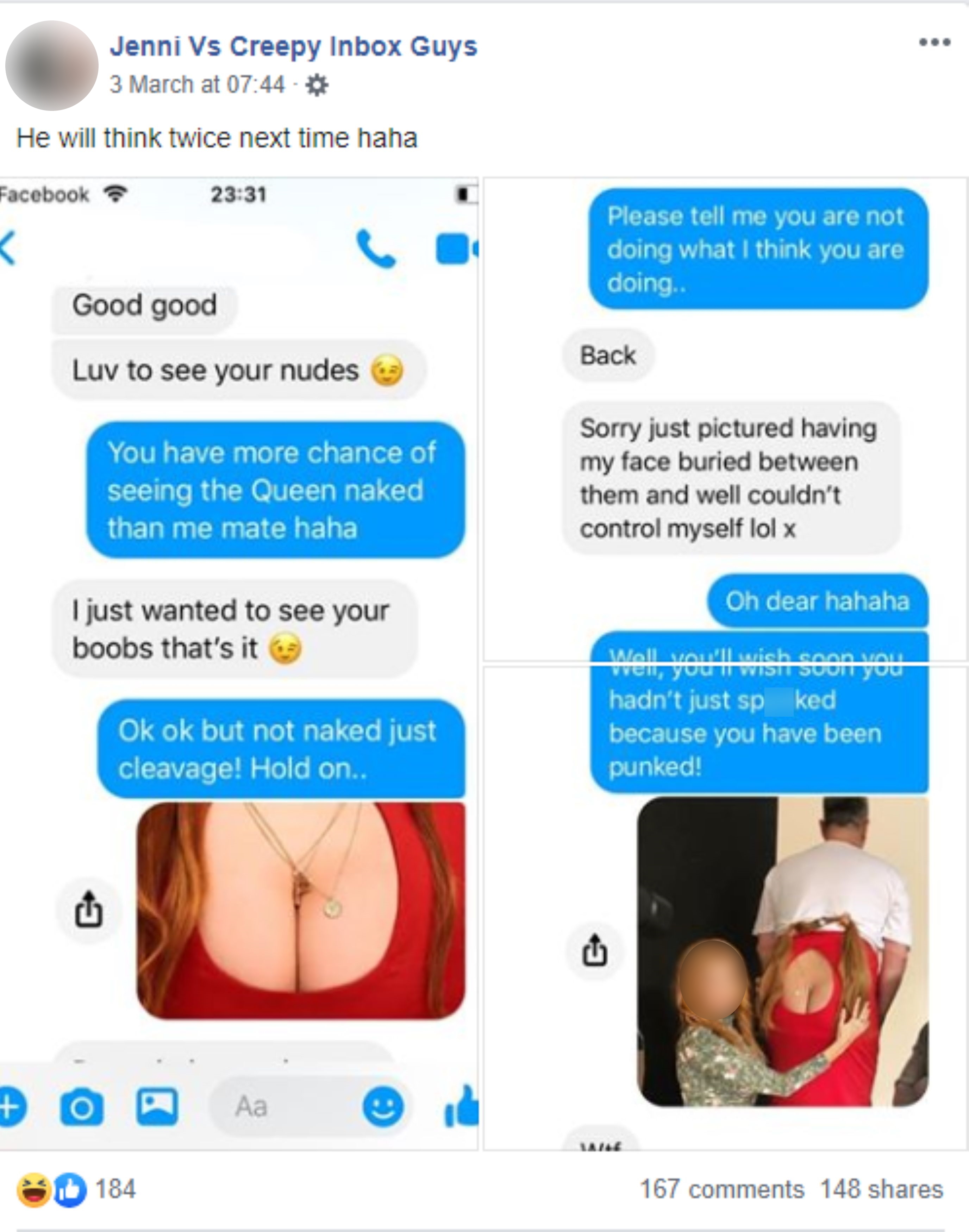 "I knew he was about to be embarrassed beyond belief."

Jennifer says she doesn’t get angry over the messages, but one man crossed the line when he tracked down a snap of her on her wedding day from her mum’s open Facebook profile.

She said: “The message where the guy tracked down my wedding photo made me so mad, it's unbelievable. I was so close to deleting the page because of that.

"I keep my personal profile locked down for obvious reasons and he had seen my mum had liked one of my public posts.

"She, unfortunately, hadn't locked her profile down, so he just went onto her photos and found one of me. Most of the others just go over my head now, but that one got to me.” 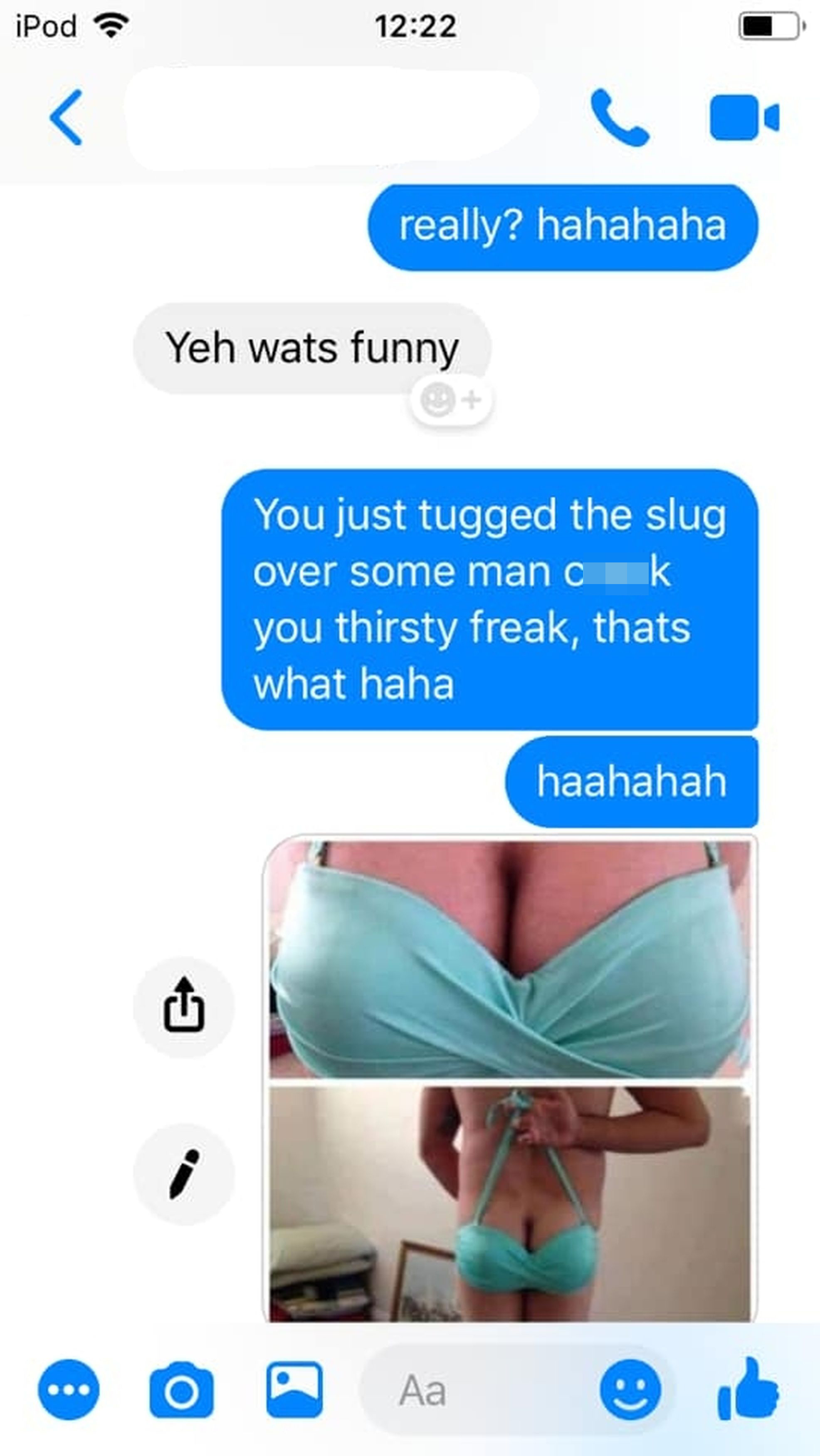 Over the years she’s been called all the names under the sun, but says she just brushes it off now.

Jennifer, who works in a bank, said: "The first message I ever received, I told the guy I was married and wasn't interested.

"As I recall, he replied angrily and called me all manner of names and so forth, as lots of fragile men do after rejection.

"I had a lightbulb moment and realised I could play with the situation and haze any future unsolicited message senders if they got pervy without provocation. 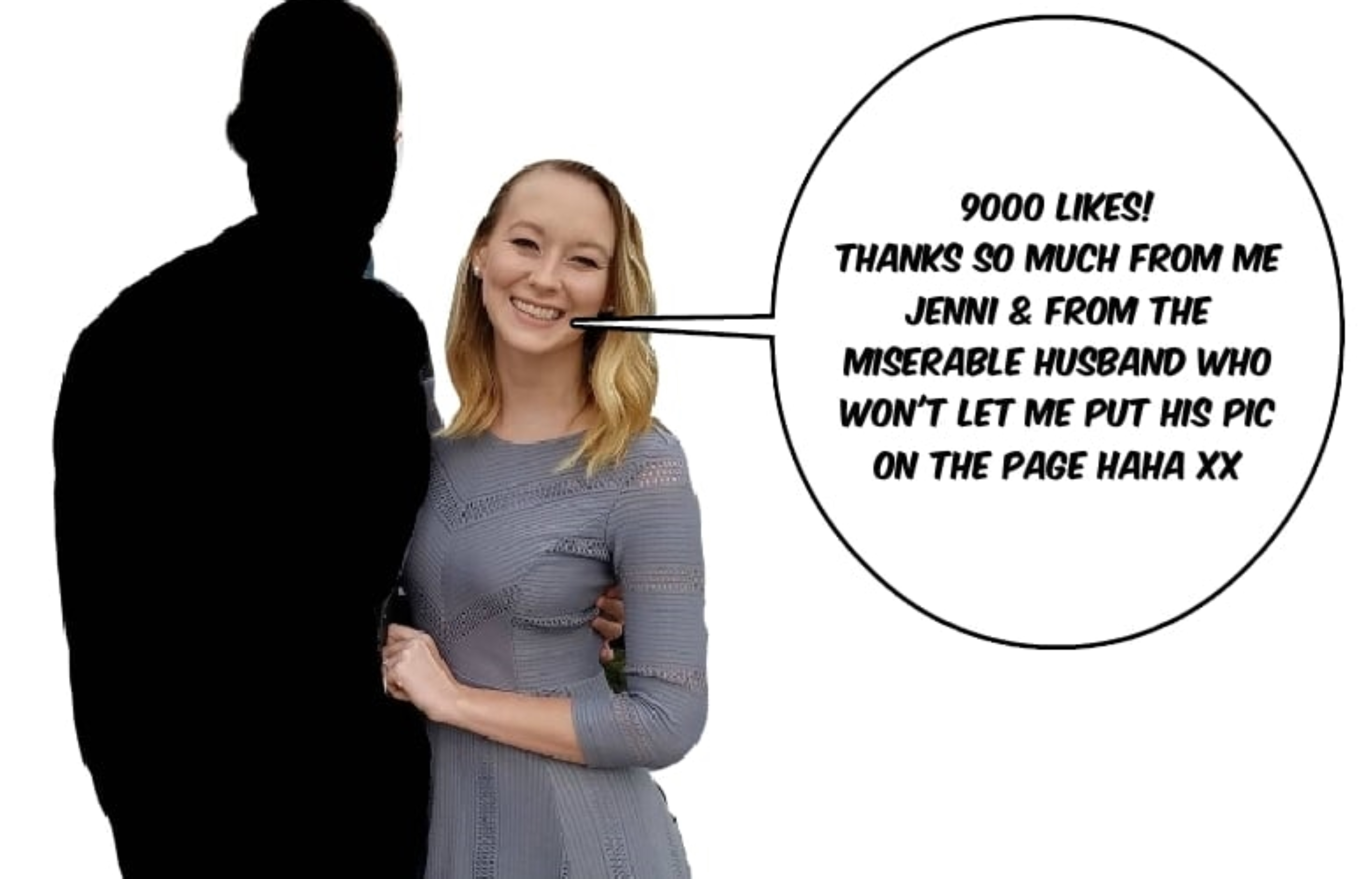 "After dealing with so many rude and disgusting messages it has become obvious that the replies after being turned down and mocked all seem to follow the same formula.

"I personally just post on the page for the entertainment value it provides me.

"But if it helps to empower and give other ladies the confidence to not take c**p from guys sending these disgusting messages then I am happy to have helped. 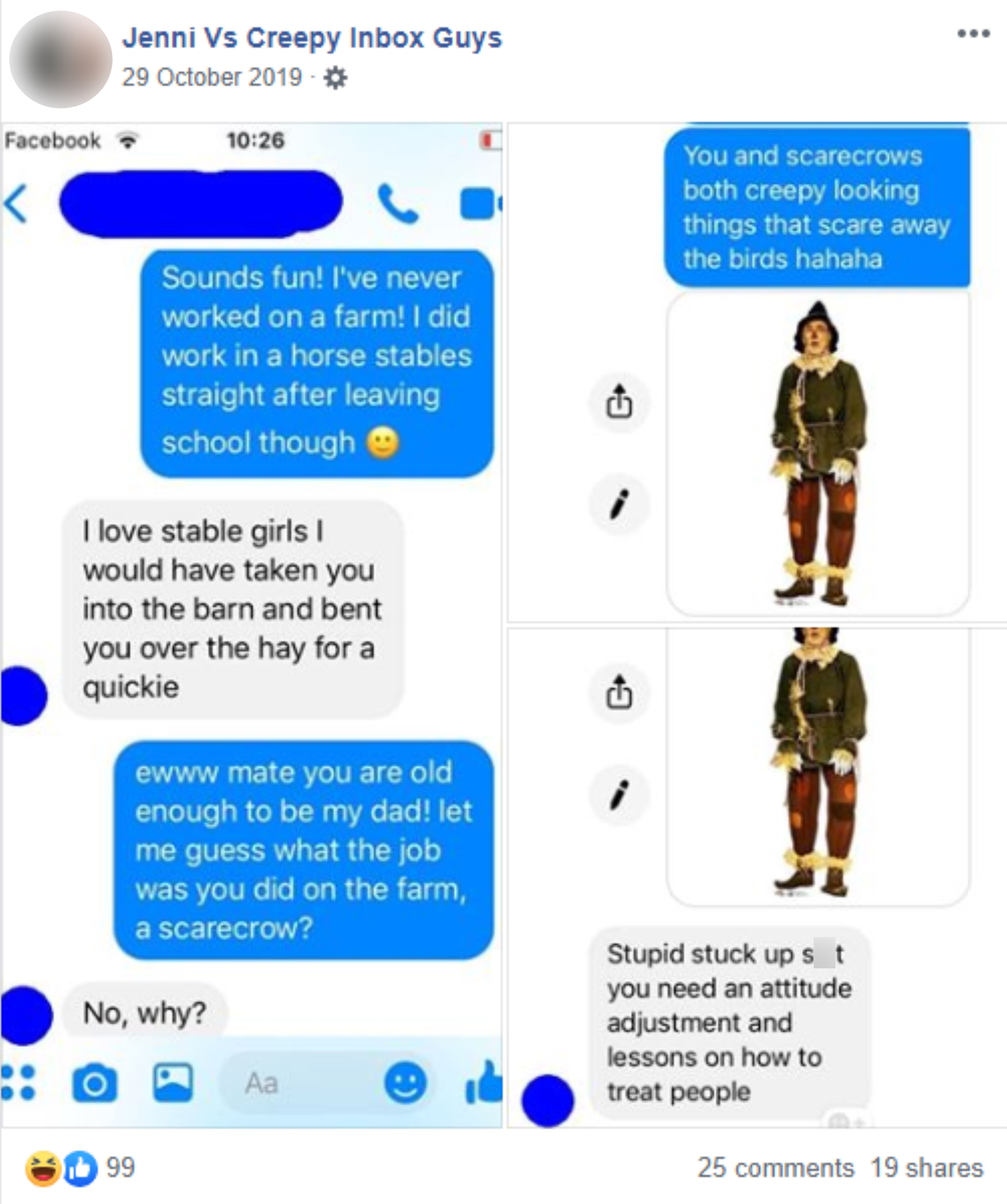 "At the time of answering the first message I received, I'd probably have said I felt disgusted and sickened by these people.

"As I've now dealt with so many I guess you could say I'm hardened to it all and am able to brush it off.

"If me raising awareness and highlighting the problem through the page's posts helps other less-hardened ladies to deal with these creeps, then good."

Jennifer said she decided to keep on shaming the creeps in the hope they’ll think twice about doing it to other women. 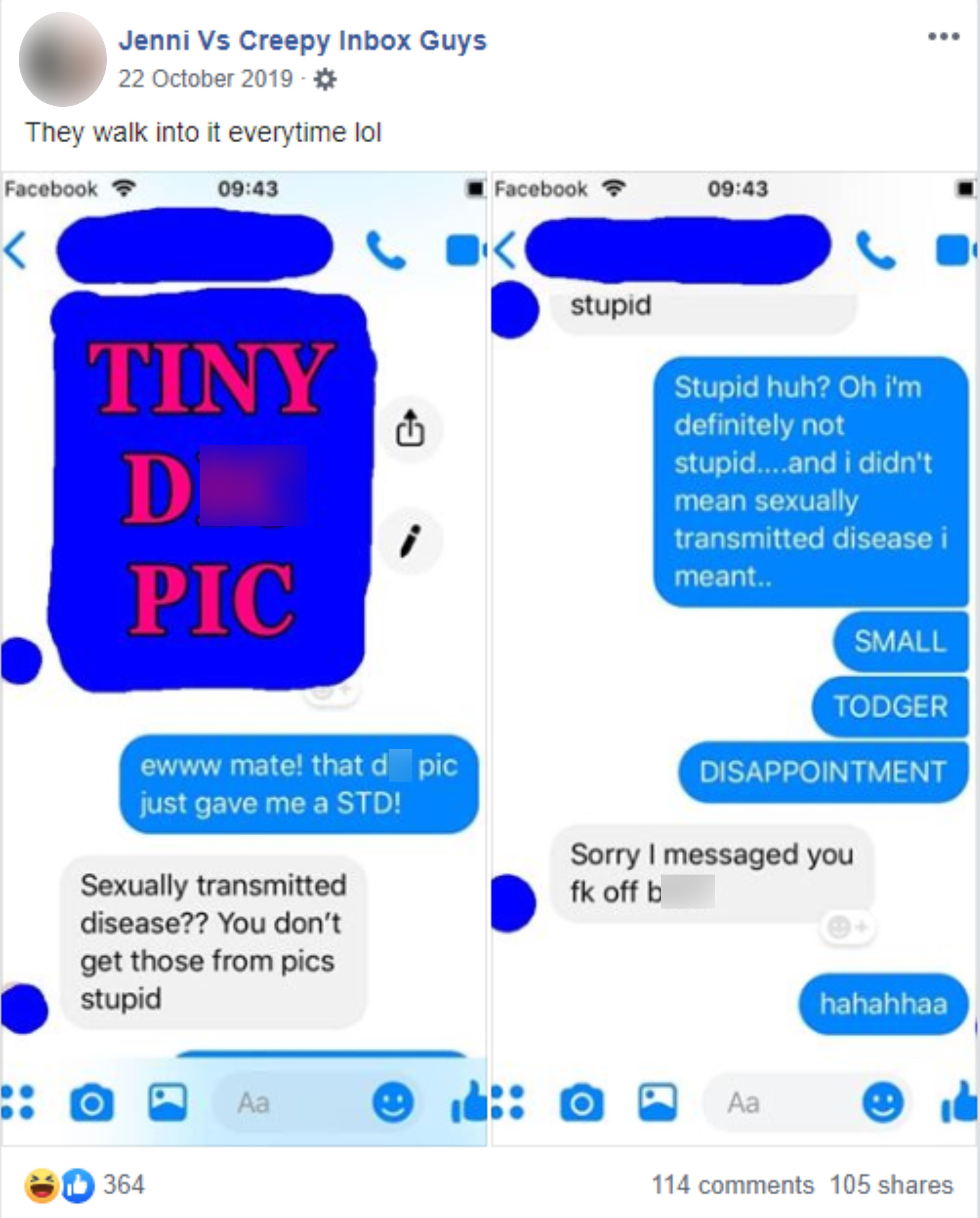 And despite her page having more than 13,500 followers, she says her husband isn’t a fan.

Jennifer said: "My husband absolutely hates that I receive these messages. It's not due to him disagreeing with the overall message of what I do.

"He just asks why I don't block them and thinks it is childish. But I believe if I did that, all they would do is move on to another poor unsuspecting woman.

"At least my method of humiliating presents the tiniest chance that they may think twice before doing it again. Plus, it's hilarious my way, so there's that."

Meanwhile this woman hilariously pranks a bloke who gave her his number by pretending to sign him up to adopt a chimp.

And these husbands share snaps showing the amusing realities of living with a pregnant woman.

Plus the photoshop genius who takes editing requests very seriously is back – and his snaps are even funnier.