From stuffing to Brussels sprouts, there are so many Thanksgiving side dishes to look forward to every time the food-filled holiday comes around.

And no dish seems to get people more excited than mashed potatoes, which a Zippia study recently found is the most popular Thanksgiving side in more US states than any other dish.

But we wondered if you could make them taste even better, so we asked Michelin-starred chefs to share their hacks for upgrading mashed potatoes every November.

Using special ingredients like wasabi and roasted beef drippings along with more typical ones — like the all-important butter — and experimenting with different preparation methods will help you make your mashed potatoes a Thanksgiving dish to remember.

Use a food mill to make the texture of your mashed potatoes even more luxurious. 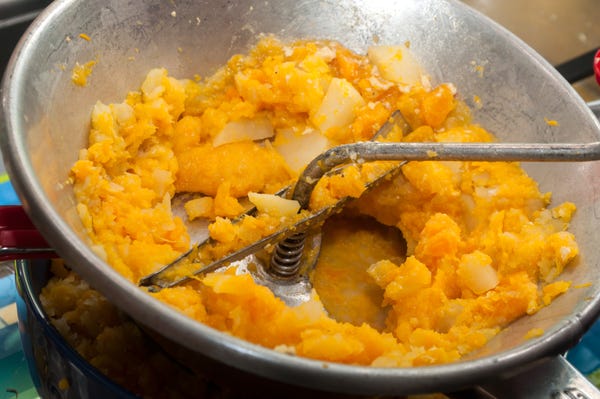 Chris Morgan, who recently opened Bammy's in Washington, DC, recommends milling your potatoes first when making your Thanksgiving mash for the best results.

"Then put them in a food processor with a three-to-one ratio of butter to milk," Morgan said. "Once the milk and butter get hot, add the mixture to the milled potatoes in the food processor."

"This way, the potatoes are able to hold more fat than they normally would be able to take," he added. "This will give a beautiful texture and a full flavor to your regular mashed potatoes."

If you want to turn up the flavor, try adding a dash of wasabi to your mashed potatoes. 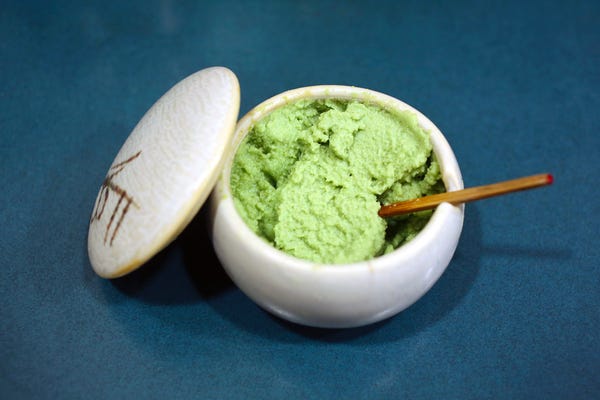 Mari Katsumura, the executive chef and pastry chef at Yūgen in Chicago, told Insider that she likes to "spice things up" by adding a little wasabi oil and freshly-grated wasabi to her mashed potatoes.

But wasabi doesn't just give her mash a kick. It's also a tribute to Katsumura's late father, Chef Yoshi Katsumura, who was known as the "king of fusion" in Chicago cuisine.

"This is a direct homage to my father, who introduced wasabi mashed potatoes to Chicago in the '80s," Katsumura said. "I will always love his rendition!" 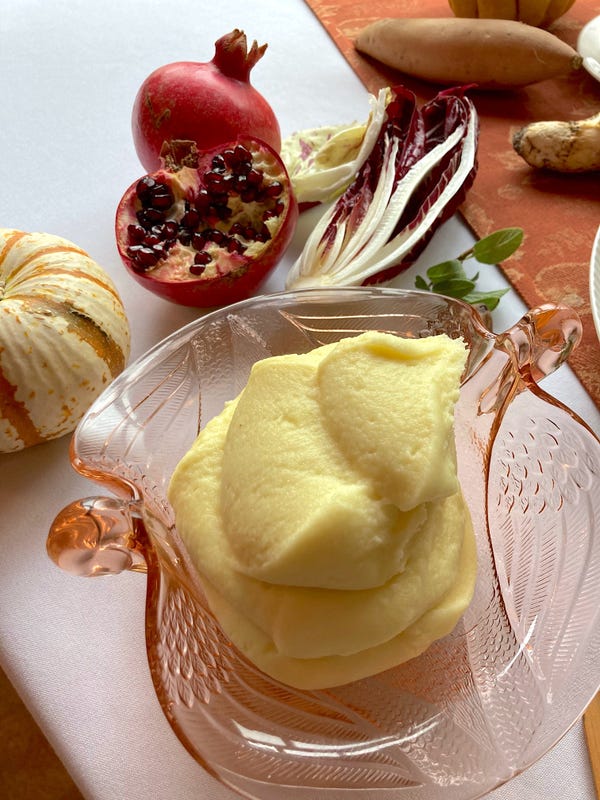 "These quintessential mashed potatoes have an uncommon twist," she said. "They are made with smoked butter and French imported Comté cheese. They have a subtle nuance that accompanies the rest of the Thanksgiving menu with great elegance."

Comté cheese is known for its nutty flavor and creamy texture. You can now find it at Whole Foods, Costco, Trader Joe's, and Amazon.

Or throw in olive oil and fresh herbs to give your Thanksgiving mashed potatoes a Mediterranean twist. 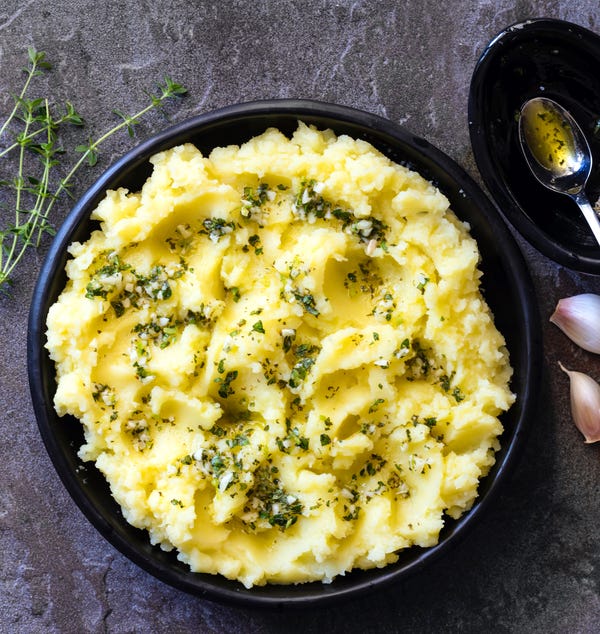 "A favorite method for delicious and easy mashed potatoes starts with roasting marble Yukon gold potatoes with fresh garlic, rosemary, and extra virgin olive oil," Michelin-starred restaurateur Michael Mina told Insider. "We then use all of those ingredients to quickly whip up a fresh take on mashed potatoes."

First combine your potatoes, olive oil, sea salt, rosemary, garlic, and some freshly cracked black pepper in either a dutch oven with a lid or a small roasting pan double-wrapped with tinfoil.

"You want to create an airtight seal so the potatoes roast and steam," Mina explained.

Place your potatoes in an oven that's been preheated at 400 degrees Fahrenheit for 30 to 45 minutes. At 35 minutes, check to see if they're done. You'll know when a knife can slide through without resistance.

Remove your potatoes from the oven and discard the rosemary, plus any cloves of garlic that are darker than golden brown. Then mash your potatoes, stir well, and add the chives or parsley on top.

Your mashed potatoes will taste like a British roast dinner with the help of some roasted beef drippings. 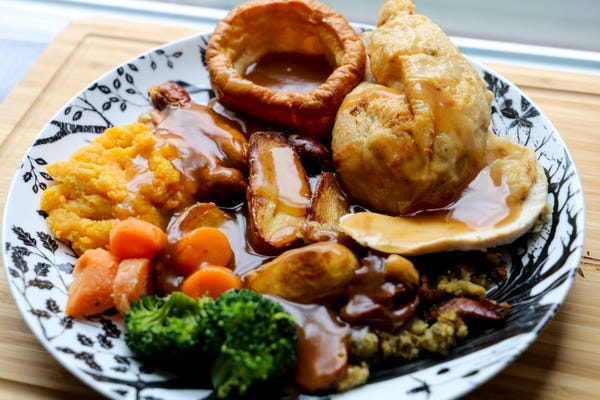 Brad Carter, of Carters of Moseley in Birmingham, England, told Insider that he's a huge fan of mashed potatoes.

"I think mashed potatoes are a standalone dish," he said. "Something I'd serve on it's own, even in the tasting menu before the main course."

And to take his mashed potatoes to the next level, Carter adds roasted beef drippings instead of butter.

"It gives it a taste of roast dinner," he said. "You get this amazing, meaty, British roast dinner-flavored mash."

A British roast dinner, also known as a Sunday roast, is actually very similar to a Thanksgiving plate. It commonly consists of roast meat, potatoes, vegetables, and gravy — although Americans miss out on the delicious addition of Yorkshire puddings.

And you'll never go wrong with adding melted butter to your mashed potatoes. 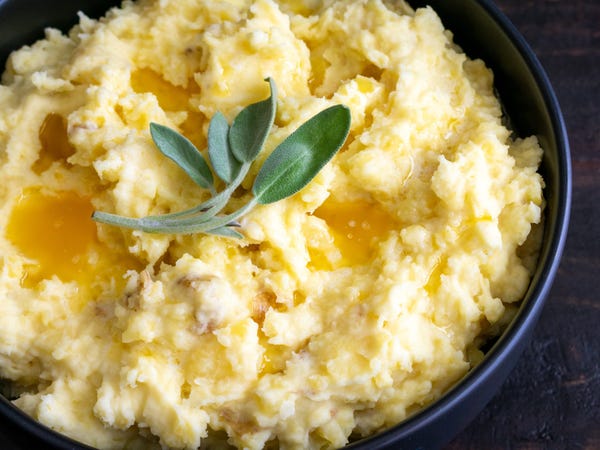 Beverly Kim, who runs Parachute in Chicago, has a special hack for getting the most out of the butter on your mashed potatoes.

"Put divots on top of the mashed potatoes, and add melted butter on top," she told Insider. "When you reheat it, the butter seeps in and gives it extra flavor."