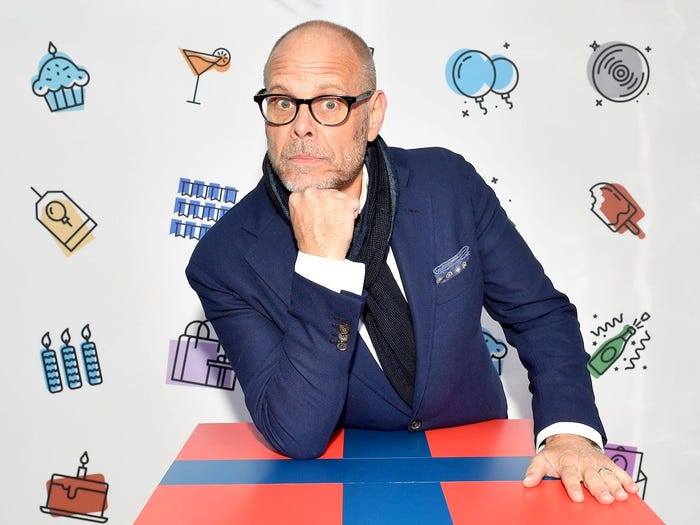 Celebrity chef Alton Brown has apologized after making a "flippant remark" about the Holocaust on Twitter.

The apology comes after a whirlwind of a week for the Food Network star, who delighted fans with his election night tweets before he began discussing his conservative beliefs. He later requested an apology from Newsweek for calling him a Republican.

It all came to a head on Tuesday night, when Brown tweeted: "Do you think camp uniforms will be striped, like the ones at Auschwitz, or will plaid be in vogue?"

The tweet appeared to allude to America's ongoing election drama, as Donald Trump has yet to concede and Secretary of State Mike Pompeo said there will be a "smooth transition to a second Trump administration" — despite the fact that networks like the AP, CNN, and Fox News called President-elect Joe Biden the winner on Saturday, following Insider and Decision Desk's projection on Friday.

Brown took to Twitter on Wednesday morning to apologize for his tweet, which has since been deleted.

"I apologize for the flippant reference I made to the Holocaust in my tweet last night," the tweet reads. "It was not a reference I made for humorous effect but rather to reflect how deeply frightened I am for our country. It was a very poor use of judgement and in poor taste."

Brown did not immediately respond to Insider's requests for comment.

On Monday, Brown tweeted that he had voted Republican for "most of my life."

"I consider myself a conservative," he wrote in the tweet, which has since been deleted but was screenshot by Eater.

"I want to believe there are still 'very fine' people on both sides of the aisle," Brown added, alluding to Trump's quote about the neo-Nazis and white supremacists who marched at the violent Charlottesville "Unite the Right" rally in 2017. "But… if #GOP leaders don't get their collective noses out of that man's a–, we're gonna have words."

A number of fans were dismayed by Brown's statement, and the "Good Eats" star was quick to respond to their criticism.

But that wasn't the end of it. Brown's comments were then picked up by Newsweek, which ran a headline stating that he was a Republican.

In response to the story, Brown tweeted that while he had voted for Republicans in the past, it wasn't the "same as being a Republican."

The Georgia native said he had voted for and "strongly supports" Biden and Kamala Harris, as well as Raphael Warnock and Jon Ossoff — the Democratic candidates who are both running for Senate seats in the state's January runoff elections.

Brown also spoke out against Georgia's incumbent Republican senators, David Perdue and Kelly Loeffler, who are currently fighting for reelection.

"My family has been in Georgia for at least 5 generations. I own multiple businesses in Ga. I employ Georgians. My home is Georgia. And my senators are embarrassing me and the state they are supposed to represent," he wrote in the since-deleted tweets, which were obtained by Newsweek. "It's time for decency and unity to trump tribalism, racism, and disinformation."

The headline on the Newsweek story was changed to "Alton Brown reveals he's voted Republican and fans are not impressed." The publication also added a correction at the bottom of the article.

"This article's headline has been changed to reflect that while Alton Brown has stated that he has previously voted Republican, he has not said that he is a member of the Republican party," it reads. "Newsweek regrets the error."

During the 2012 presidential election, the celebrity chef refused to reveal who he had voted for — and sent his fans a clear message.

Brown seemed to stick to that rule at the beginning of last week, alluding to his election anxiety through food rather than clear proclamations about his political beliefs and joking about how he was going to "mainline moon pies and snort cheese powder."

It was a rant that delighted fans, with Uproxx writing that Brown's tweets "perfectly capture our election anxiety."

But as controversy has swirled around Brown over the last few days, problematic comments from his past have also resurfaced

Journalist Allison Robicelli, who writes for The Takeout, posted a photo from one of Brown's cookbooks on Twitter.

The photo showed a page from the appendix of Brown's cookbook, where he'd listed "The Frugal Gourmet," a cookbook by the late PBS star Jeff Smith, alongside the line: "This was my first cookbook. I don't care what he does or did in his personal life. Everything in here worked back then and it still does."

Smith was accused of sexually abusing eight teenage boys in multiple lawsuits filed in 1997. Just days before one of his cases was set to go to trial, Smith settled with seven of his accusers, most of whom said the alleged abuse happened in the 1970s, for an undisclosed sum. Two of his accusers had worked for Smith.

Robicelli tweeted that she was "literally obsessed" with Brown's show before she saw the note in his cookbook.

A 2011 blog post from another Brown fan also resurfaced as discussions about the chef continued on Twitter, according to Eater.

In "The Taste of Disillusionment," food blogger David Rheinstrom wrote about how he drove 234 miles to see Brown, who he called one of his "great food heroes," speak in Cedar Rapids, Iowa.

Rheinstrom wrote that Brown had made jokes about gay parents and African Americans during the talk, even using the word "Negro."

When the latter failed to get any laughs, Brown remarked: "Remind me not to make African American jokes in Iowa."

Rheinstrom wrote that he left the talk without getting his book signed by Brown and had come to the conclusion that his favorite celebrity chef was a "jerk."

"I don't want this to be a 'I'm a liberal and my hero's a conservative, ergo he is no longer my hero' entry," Rheinstrom added. "Please, God no — don't let that be the takeaway."

"It was more that my hero turned out to be a jacka–, a bit of a bigot, and a hypocrite."