Raw video: Maintenance worker adopts snake, takes it back to his ranch after discovering it in a tenant’s toilet.

An enterprising Florida snake catcher has devised a festive way to combat the Everglades’ ever-growing Burmese python scourge — by using the reptile’s eggs to make ssssscrumptious Christmas cookies, among other dishes.

"Heading out to hunt tomorrow with some fresh rocky road & chocolate almond python egg cookies," wrote Donna Kalil alongside a recent Instagram pic of the unorthodox baking ingredients. Since joining South Florida’s python eradication program in 2017, the Everglades crusader has bagged 470 of these Southeast Asian invaders, and often employs their body parts in various dishes, the Miami Herald reported.

Among the most prized are the python’s leathery eggs, which the unconventional chef boils, makes into frittatas and, of course, freezes for baking cookies, like a herpetological Peter T. Hooper from the Dr. Seuss books. One of her more recent holiday-friendly creations was gluten-free rocky road and sugar hiss-mas cookies in the shape of little snakes.

Prefer your snake without sweeteners? Not to worry: this serpent-slurping epicure uses the python meat — known locally as "chicken of the glades" — to whip up everything from pasta sauce to jerky. Kalil likes munching on the latter for a much-needed pick-me-up during her often 10-hour snake hunts.

"It’s really good when you cook it right," she said, adding that it "takes practice" to avoid overcooking it.

Unfortunately, the Burmese python’s status as an apex predator in the mercury-rich Everglades means it accumulates massive amounts of the metal in its body. And the bigger the snake, the more mercury it likely contains — which is problematic for a predator that can grow up to 23 feet long.

To safeguard against possible contamination, Kalil refrains from consuming python on a daily basis and only eats snakes measuring around 6 feet or less. She even has a testing kit to gauge mercury levels in the meat.

Kalil may not be the only one chowing on constrictor in the future. The Florida Fish and Wildlife Conservation Commission is currently measuring mercury amounts in Burmese python populations to determine whether they are safe for public consumption. 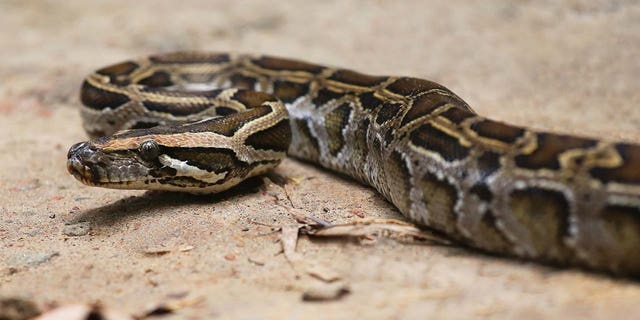 The Florida Fish and Wildlife Conservation Commission is currently measuring mercury amounts in Burmese python populations to determine whether they are safe for public consumption.
(iStock)

"If we can determine that they are safe to eat, that would be very helpful to control their population," said program director Mike Kirkland of the culinary contraception proposal.

Currently, Florida residents are only encouraged to kill the scaly invaders, which have overwrithed South Florida since the first specimen was released into the Everglades in the 1980s.

"This [eating them] would be a wonderful way to get more people involved with helping us remove pythons from the environment," said Kalil.