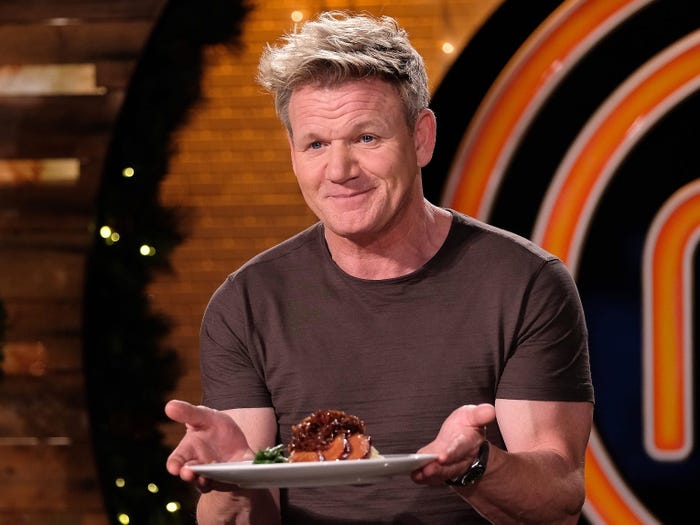 Gordon Ramsay is causing a stir once again, and this time it's for a burger with a $106 (£80) price tag — no fries included.

The Michelin-starred chef is opening Gordon Ramsay Burger inside the iconic Harrods department store in London, which promises to "provide a taste of America, without the trans-Atlantic trip."

Other dishes at Ramsay's new restaurant are priced lower, though they hardly come cheap.

The $56 (£42) lobster and shrimp burger features a pan-seared lobster and rock patty, along with pickled vegetables, herb aioli, and frisée. The $33 (£25) Hell's Kitchen burger has Mozzarella cheese, roasted jalapeños, avocado, roasted tomatoes, and a jalapeño aïoli.

One of the cheapest burgers on the menu is the $28 (£21) American burger, a basic version that features a beef patty, American cheese, tomato, pickles, red onion, butter lettuce, and a burger relish, according to the Mirror. You can also get the "Cheeky Dawg" — a hot dog with braised ox cheek, horseradish, and house pickles — for the same price.

The prices are significantly higher than the dishes at Ramsay's original Gordon Ramsay Burger in Las Vegas, where the most expensive burger on the menu — the Truffle Burger — will only set you back $25 in comparison.

"I promise you will never have tasted anything quite as delicious as the amazing burgers at Gordon Ramsay Burger," Ramsay told Hot Dinners. "I've been perfecting burgers for years in America and now, at Harrods, we are taking it to the next level."

According to the restaurant's website, Ramsay's burger patties feature a blend of "chuck, brisket, and rib cap" and will be "cooked to perfection on an open flame." They'll then be brushed with Ivy House Farm butter "for an extra hit of nutty sweetness."

"As you'd expect from Michelin-starred chef Gordon Ramsay, these are not your average quarter-pounders," the website adds.

But some on social media weren't impressed with the eye-watering price tags, especially during a pandemic

"Would be nice if all these millionaire celebrity chefs could cater to the budgets of normal people and not fellow millionaires," one commenter wrote on Instagram.

"£80 is more than I have left for food for the month at the moment. Thanks for that though," another added on Twitter.

A representative for Ramsay didn't immediately respond to Insider's request for comment.

Back in September, many called out the "MasterChef" star for serving a small but expensive Full English breakfast at his Savoy Grill restaurant in London.

The $24 (£19) dish features two eggs, a few slices of bacon, one portobello mushroom, one grilled tomato, one link of pork sausage, and a gravy boat of baked beans.

Many of Ramsay's followers asked "where's the rest of it?" and noted that full English breakfasts are usually known for their large portions.

But in typical Ramsay fashion, the "MasterChef" star didn't let all the criticism slide. Instead, he unleashed his famous "idiot sandwich" comeback.