I tend to be a creature of habit when it comes to cooking during the busy work week. I make the same Greek salad for lunch every day, and I've got a couple of rotating dinners that I usually whip up from Monday to Thursday.

But I've spent more time in the kitchen than ever before this year, which has pushed me to find quick and easy recipes that'll spice up my repertoire — because even frozen Trader Joe's can get really old.

Ina Garten has been my go-to when it comes to picking new pasta dishes, so this month I decided to take her weeknight bolognese for a spin.

The rich and comforting dish was exactly what I needed after a long day. Better yet? I made it in just 30 minutes.

Ina Garten shared the recipe for her bolognese pasta not longer after the pandemic first hit. 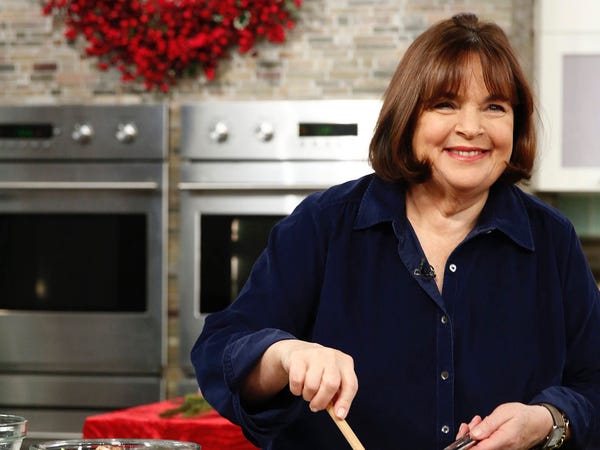 Even before she became a quarantine star for her giant cosmopolitan, the Barefoot Contessa was already sharing easy recipes to help her many fans who were stuck in lockdown — and dealing with supermarket shortages.

One of the first dishes Garten posted on her Instagram in March was her weeknight bolognese, which she said could be made with a variety of meats — or easily modified to be vegetarian-friendly.

"Weeknight Bolognese! You probably have the ingredients in your pantry and fridge," she wrote in the caption. "You can use any ground meat — turkey, chicken, or pork. You can even sauté mushrooms instead of beef and make a delicious vegetarian dinner!"

Garten's weeknight bolognese is made with ground sirloin, orecchiette or small shells, and dry red wine. 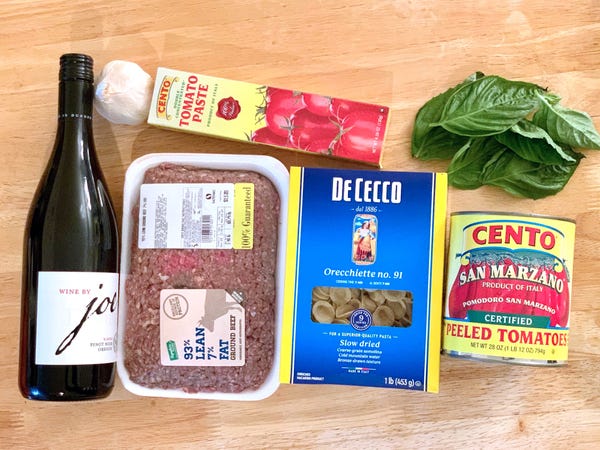 When it comes to the canned tomatoes, it should be noted that Garten strongly recommends using the San Marzano variety. The "Barefoot Contessa" star is definitely not a fan of plain canned tomatoes.

"A canned tomato is not that interesting," she told the New York Times' Sam Sifton during the virtual launch of her new cookbook "Modern Comfort Food" in October. "You can use a San Marzano tomato — that has interesting flavor."

But Garten does allow for other adjustments in this recipe. The point, after all, is for it to be pantry-friendly.

You can substitute the sirloin for any ground meat or chopped mushrooms. Garten says it's also fine to "use any dried pasta that you like!" for this dish, and that it's okay to leave out the cream and basil if you don't have any.

Before I started making my bolognese sauce, I just needed to do a little prep. 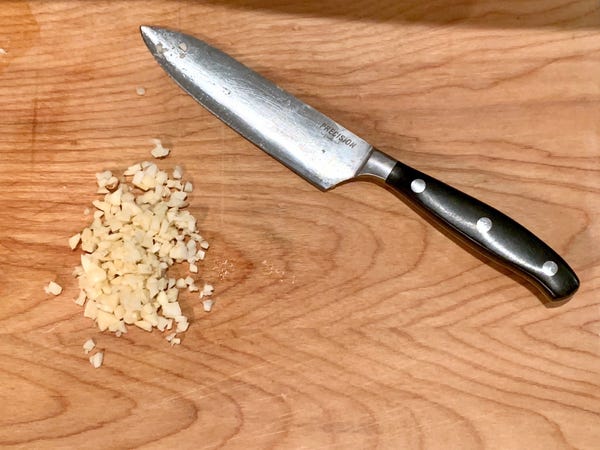 I recently spoke to Trent Pheifer, an Ina Garten superfan who — like me — has mainly taught himself how to cook through her foolproof recipes. Another thing we have in common? Being messy in the kitchen.

"I'm not the most organized person in the kitchen, and I'm kind of a sloppy cook, but one of the things that really helped me was preparing," he told me. "Preparing all the ingredients, chopping them, and putting them into bowls."

I've had my share of pasta mishaps by not planning ahead, so I took Pheifer's advice to heart and made sure to chop everything I needed before I turned on the stove.

First I minced my garlic. Garten recommends using 4 teaspoons (which is around four cloves).

Then I chopped up my fresh basil. 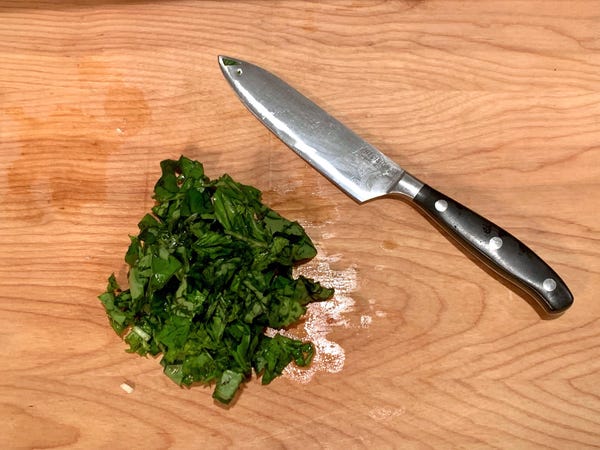 It was time to get my sauce going, and first up was the meat. 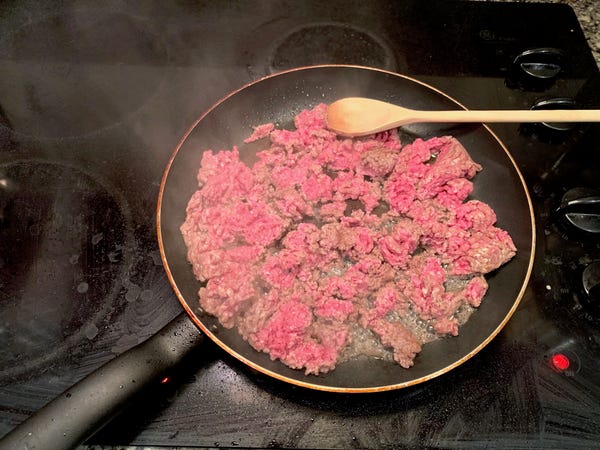 I heated 2 tablespoons of olive oil in a large skillet over medium-high heat and added 1 pound of ground sirloin to the pan.

I used a wooden spoon to crumble the meat, stirring it occasionally. Garten's recipe recommends cooking the meat for five to seven minutes, until the meat has lost its pink color. By five minutes, the meat had fully browned.

Then it was time to season the meat. 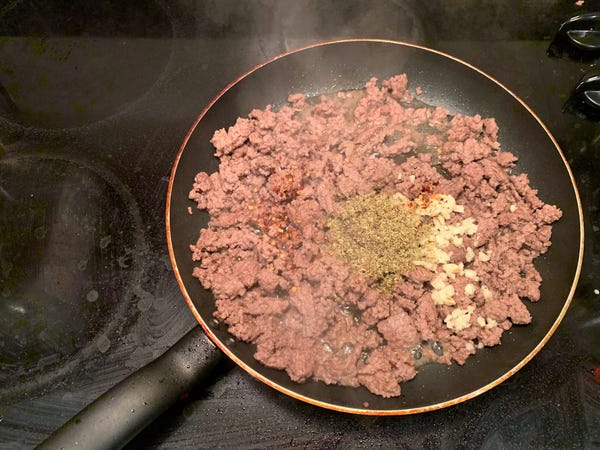 I added my minced garlic, along with 1 tablespoon of dried oregano and ¼ teaspoon of red pepper flakes (along with a few extra shakes — I like things spicy).

Next up was my favorite step — the wine. 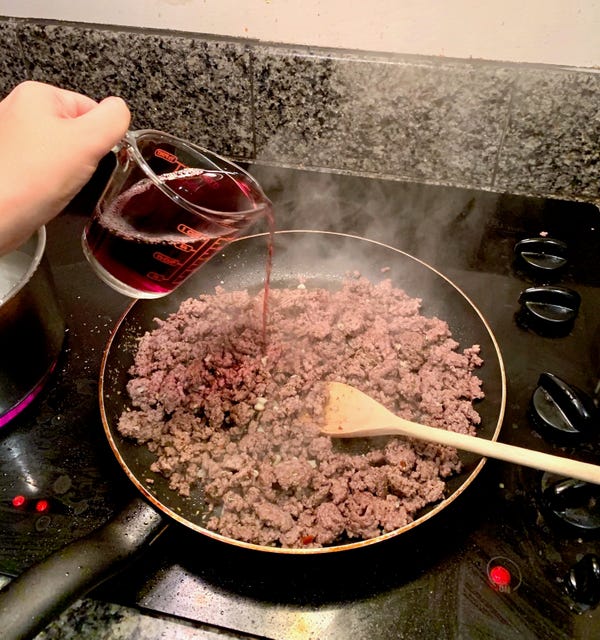 After letting the seasoned meat cook for one minute, I poured 1 cup of red wine into the skillet.

Garten's recipe specifies using a dry red wine. To be honest with you, I usually select my wine based on what's under $15 at Costco rather than by type (ah, adulthood). But a quick Google search showed that I could pick a Cabernet Sauvignon, Pinot Noir, or Merlot — I went with a Pinot.

After pouring the wine, I used my wooden spoon to stir everything together.

Then I added my San Marzano tomatoes and tomato paste. 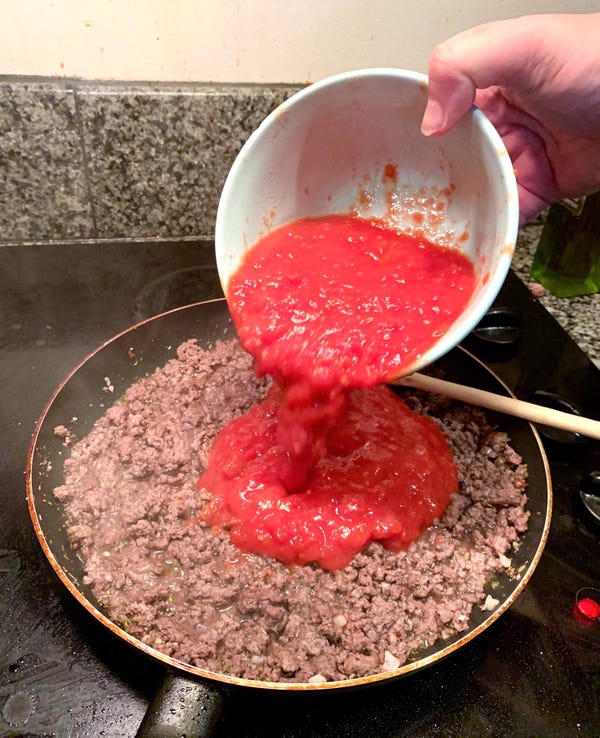 I actually couldn't find crushed San Marzano tomatoes at my local Safeway and had to get peeled ones instead. So before I threw them into the pan, I quickly ran the tomatoes through a food processor.

After throwing in 2 tablespoons of tomato paste, I seasoned everything with salt and freshly ground black pepper.

I gave everything a good stir, then brought my sauce to a boil. 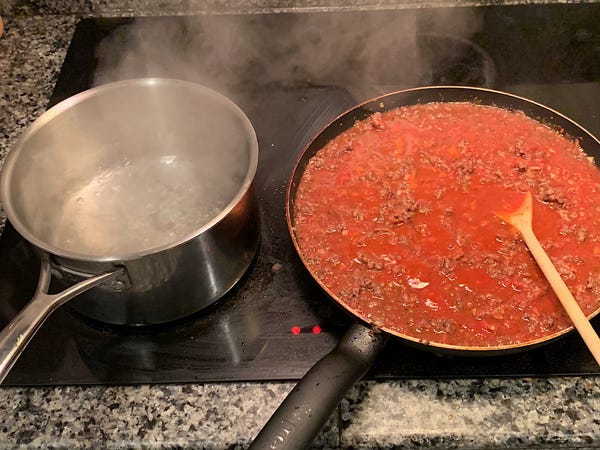 Once it began to bubble, I lowered the heat and allowed the pan to simmer for 10 minutes while I got a separate pot of water going for my pasta (don't forget the salt!).

As the pasta cooked, I put the finishing touches on my sauce. 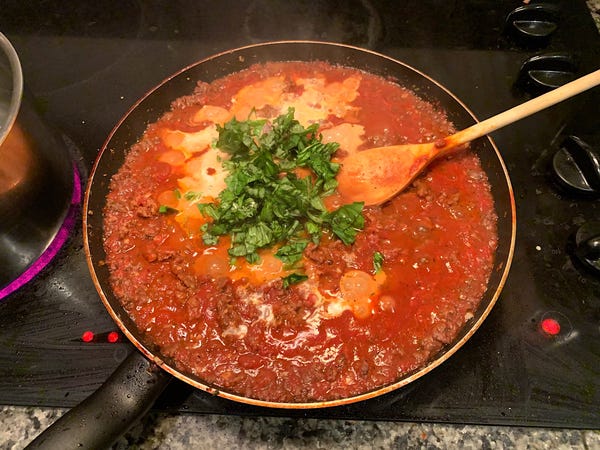 I added the fresh basil leaves, along with ¼ teaspoon of nutmeg and ¼ cup of heavy cream.

I let my sauce simmer for another 10 minutes while I waited for my pasta to turn al dente. 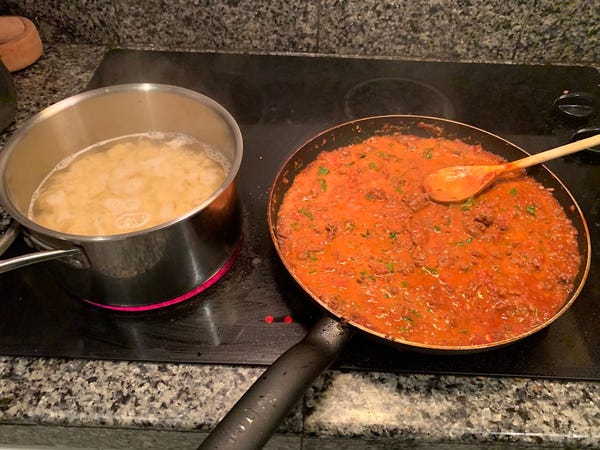 The sauce smelled absolutely delicious and had turned into a comforting deep-red color. It was exactly what I wanted to see as I fought back the slump that always comes when Daylight Savings turns the sky pitch-black before 6 p.m.

After 10 minutes, the pasta was ready.

Once the pasta was cooked, I used a slotted spoon to transfer the shells to my sauce. 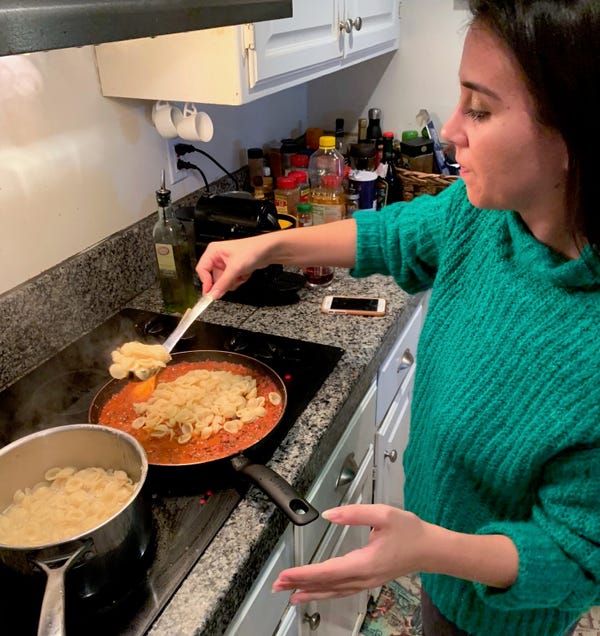 Per Garten's instructions, I made sure to save my pasta water.

I added another ¼ cup of the red wine and a few spoonfuls of my pasta water. 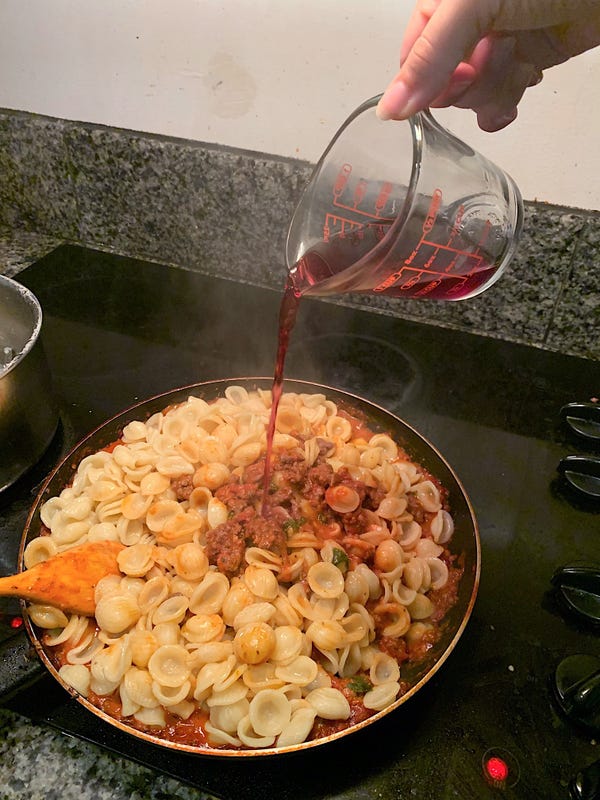 Then I started mixing everything together.

After letting it cook for a minute, I was done. The pasta looked glorious, and it tasted even better. 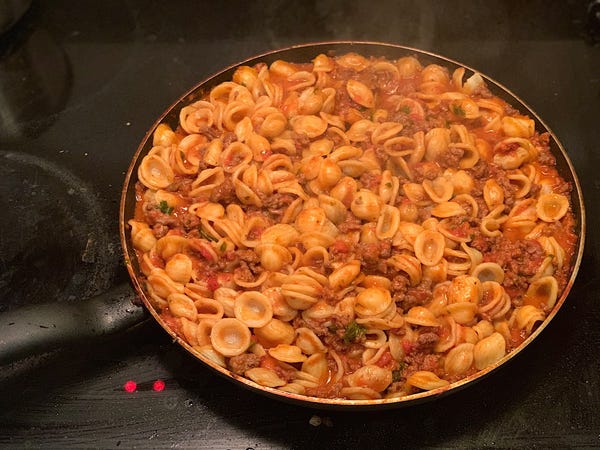 Bolognese is my favorite type of pasta bar none, so I had some pretty high hopes going into this. While I've tried a variety of Garten's pastas, I had never made one of her red-sauce dishes before.

But Garten has a knack for giving classic recipes a great new twist, and her weeknight bolognese is no exception. The shells are the perfect vehicle for this dish, catching the very flavorful sauce so that you can have a bit of it in every bite.

The nutmeg in the bolognese nicely balances the kick from the red pepper flakes, and the freshly-grated Parmesan cheese I added on top (per Garten's suggestion) melted beautifully on the warm sauce.

My family, who helped me test the recipe, only had rave reviews.

Now that winter is fully here, I know I'll be turning to Garten's weeknight bolognese a lot over these next few months. 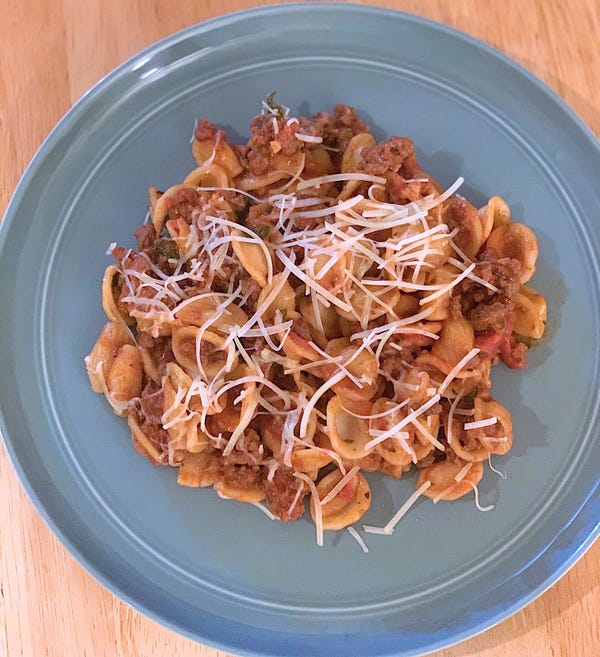 Garten's pasta is so quick and easy, and I can't wait to try the recipe with mushrooms as well. I'll definitely be adding the weeknight bolognese to my comfort-food repertoire (along with Garten's five-cheese penne pasta).

After making it through this year, we all deserve carbs. All the carbs.