New Yorkers are known for their ambivalence toward seeing celebrities in the streets of their great city. It’s one of the reasons those stars enjoy living here.

That’s why it was so embarrassing when recently, I was accidentally photobombed by chef and human Xanax Samin Nosrat, and I reacted with a pure, unadulterated joy that manifested itself in the following outburst as she attempted to walk by:

That’s what inspired me to attempt one of Nosrat’s recipes, despite having only recently figured out how to cook frozen cauliflower gnocchi into anything besides a sticky, mushy, sorry substitute for pasta.

She recently released her “10 Essential Persian Recipes” for The New York Times’ Cooking section, a list that both intrigued and intimidated me, particularly for the challenges it would present to my tiny, apartment-sized kitchen.

Included on the list is the notoriously difficult-to-perfect tahdig, a rice dish that Nosrat says translates to “bottom of the pot” and is known as the “highlight of Iranian cuisine.” When made correctly, it boasts a crispy top crust with a layer of buttery, saffron-perfumed rice beneath that is flipped in one fell swoop from pan to plate. It can be made just with rice, or with other delicious things like bread or potatoes crisped on top. This is what it’s supposed to look like:

I quickly gathered up the courage and ingredients for a tahdig attempt and got to work inviting people over to share in my excitement, just like Nosrat did so often on her show. A rainy Wednesday night at my studio apartment in Brooklyn somehow does not have quite the same appeal as the bright, lofty kitchen with tons of counter space featured in Nosrat’s Netflix series. But using fried carbohydrates as bait, I managed to wrangle one friend over.

Here’s what happened next.

Things started out pretty smoothly, actually. I measured out three cups of rice as instructed and soaked them in water, draining it out to remove the starch and repeating until the water ran clear, per Nosrat’s instruction. I was still in good spirits after the sixth round of doing this, despite a significant amount of grains sacrificed to the sink.

On “Salt Fat Acid Heat,” Nosrat prepares the traditional dish with her mother, who proclaims the water the rice is cooked in should be “salty like the sea water.” I added the required seven tablespoons, plus a bit more, and it still feels like maybe it wasn’t salty enough. It was certainly less salty than I was when I realized I had a larger pot to cook the rice in than the one I had already put six quarts of water in.

Things got even saltier from there. I couldn’t find the lavash bread the recipe calls for, at my local farmer’s market Trader Joe’s, so I substituted a flour tortilla, which the recipe suggests as an alternative. The tortilla was not quite big enough. Nosrat suggests trimming the bread to fit the pot, so I arbitrarily cut two small pieces and layered them next to one full tortilla. It was, uh, still not big enough. 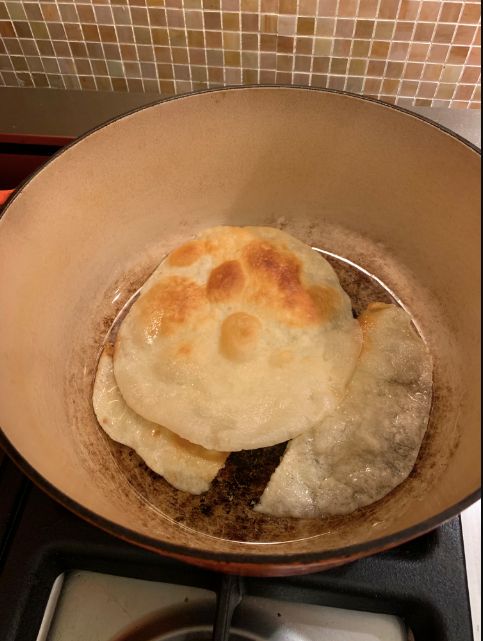 With grains of rice now sprinkled egregiously around my countertop, the floor and the sink, I attempted to channel Nosrat’s chipper disposition as I fashioned a makeshift mortar and pestle out of a wine bottle stopper and small metal bowl to ground up the (very expensive!) saffron. If you’re reading this, Samin, I’m sorry. But for people who don’t own things like mortars and pestles, this is not a bad hack! 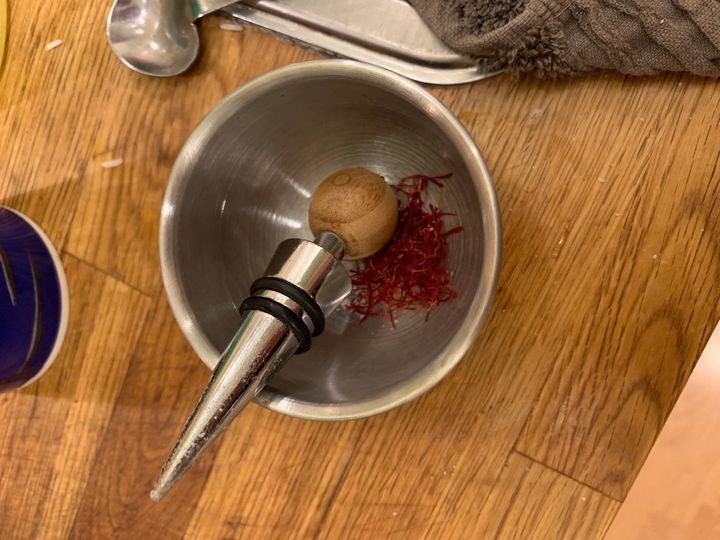 Once the rice is added to the pot, you are instructed to poke up to eight holes in the rice to help it escape from the bottom and create a crispy crust. Fun! I took this step, then I wrapped the lid of the pot with a dish towel and used my hair tie to secure it over the pot, which made my hair look like this: 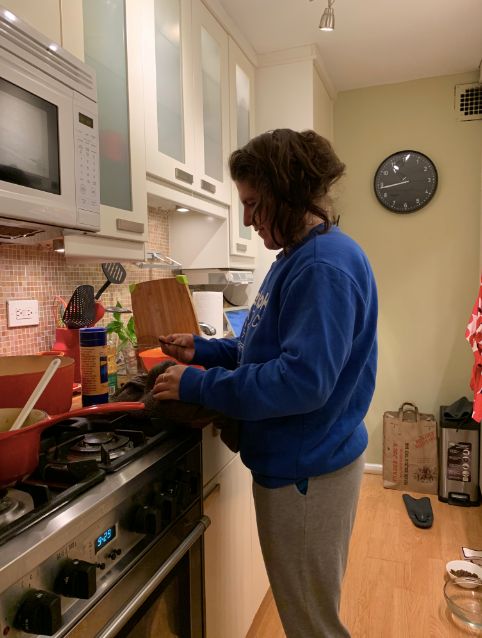 Forty-eight minutes and four quarter-turns of the pot later, the moment of truth arrived. The instructions say to “place a large platter or plate over the pot, gather your courage, praise your ancestors and flip the rice.” I stood there for about seven full minutes trying to do just that. 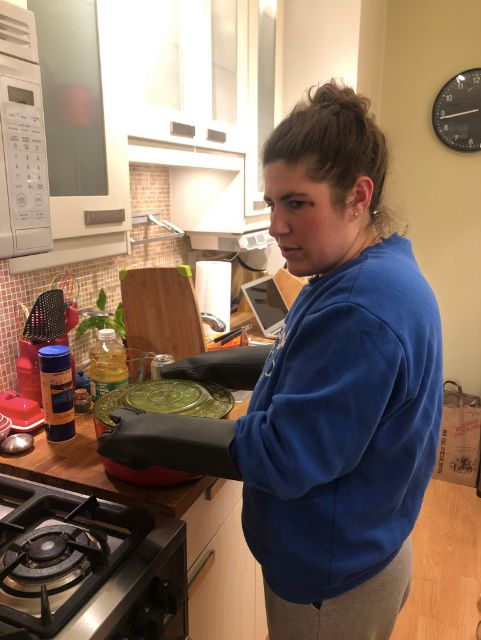 When I finally flipped, I was thrilled to see it come out (mostly) in one piece. I was less thrilled to find that most of the crispy deliciousness at the top was completely burned. Next time, I’ll cook it at an even lower temperature and perhaps ditch the tortillas altogether.

My friend missed the flip itself ― her one job ― because this is real life and not a cooking show! But as you can tell from the photos, a much larger plate than the one I used to flip this sucker onto is probably ideal, unless you like eating table rice, like me.

It wasn’t all bad. Check out this crisp factor:

But it certainly wasn’t all good, either. 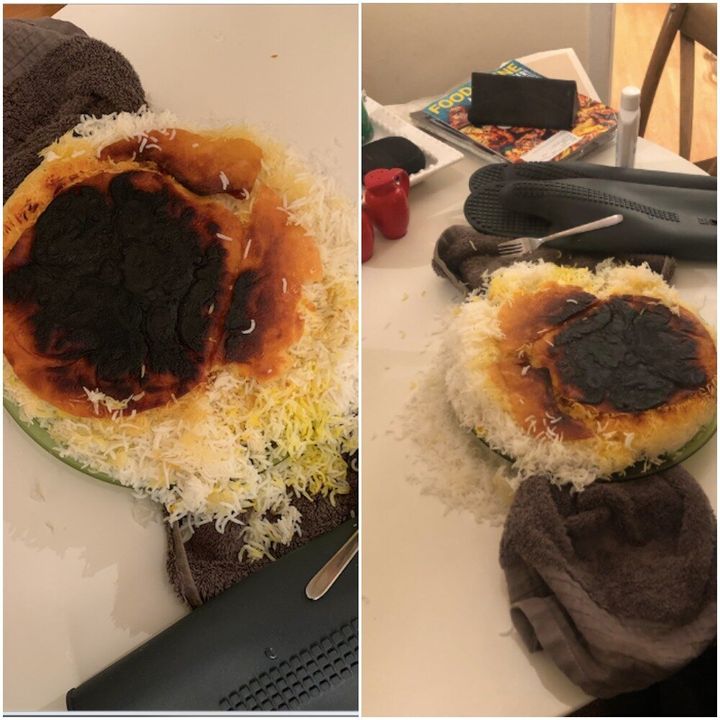 As my friend and I hovered over the table eating around the charred tortilla and shoveling forkfuls of buttery, saffron-y rice into our mouths with the same gusto we’ve come to expect from Nosrat, I realized two things. One: I can’t remember the last time I cleaned my table and two: although I’d essentially failed at a perfect or even close-to-perfect tahdig, I succeeded in enjoying the cooking and eating experience with someone I love.

And that’s what it’s all about, right? RIGHT?

Head to NYT Cooking to see the entire recipe.