We've all been craving easy comfort food over these last few months, and nothing has been more soothing to me than a big bowl of pasta.

I've learned how to make everything from Gordon Ramsay's tagliatelle bolognese to Ina Garten's five-cheese penne, and they've all been delicious.

But I recently recalled a recipe that Martha Stewart had told me about during our interview back in March: a pasta dish that could be cooked in just one pan, with 20 minutes on the clock.

With a severe case of kitchen fatigue — and a lot of intrigue — I decided to see if Stewart's one-pan pasta dish would be the new recipe of my dreams.

Martha Stewart's one-pan pasta has already made headlines in the past. 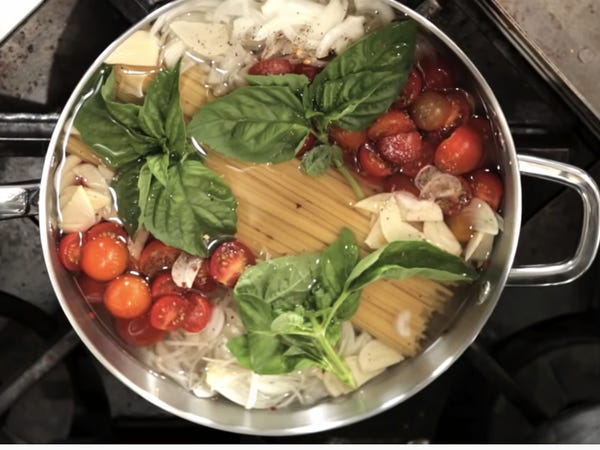 Stewart released the recipe back in 2014 and demonstrated how to make it on her PBS show "Martha Stewart's Cooking School."

"Here is the recipe that's taken the internet by storm," Stewart says in a clip that was posted on her official YouTube channel that year. "This is an odd dish because you'll never believe you can cook pasta in so little with all the other ingredients."

"It's fragrant and well-cooked and just ready to eat," she added. "Can you imagine? This is it!"

Stewart told me that her magazine was the first to do the one-pot pasta. 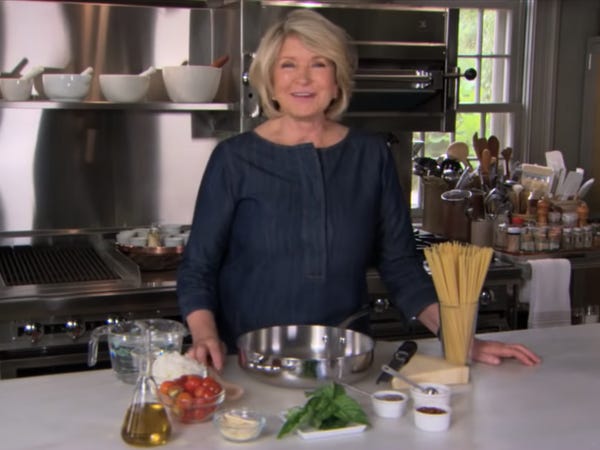 I sat down with Stewart back in March, where she shared everything from how to cook the perfect rice to the best dish that Snoop Dogg taught her how to make.

Stewart also revealed that she often turned to this one-pan pasta when she had less than 30 minutes to spend in the kitchen.

"It's delicious, and you can do so many different kinds of pasta and so many different flavorings," she told me. "Add tomatoes, the spaghetti and basil, and a little bit of salt and water, the cheese at the end. It cooks in 20 minutes and you're done!"

A delicious bowl of pasta and only one pan to clean? It sounded like an absolute dream. 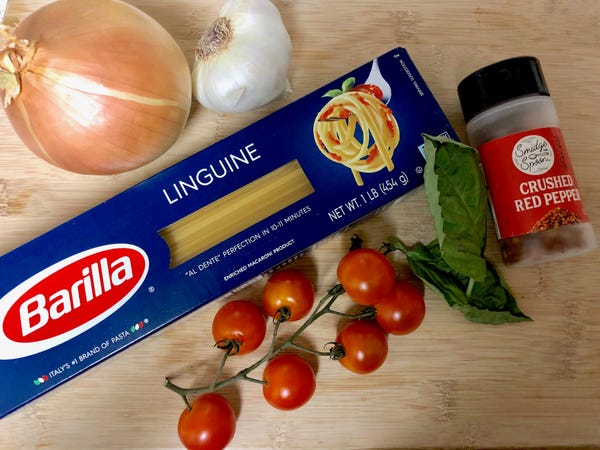 Stewart's recipe only has three steps, with very minimal prep. 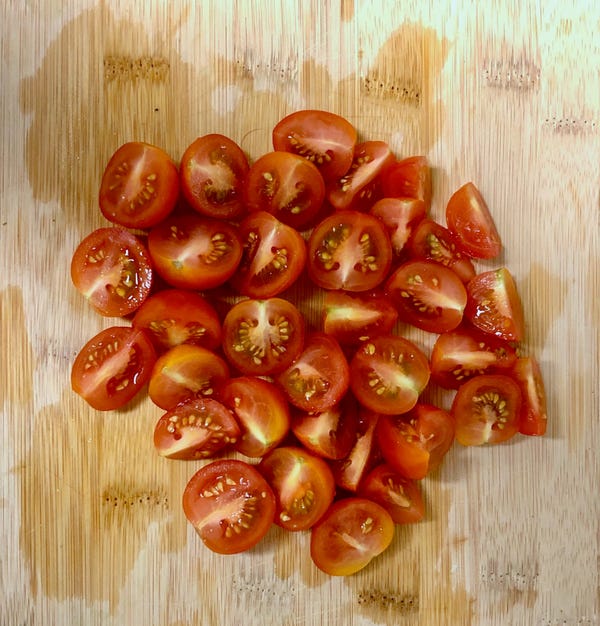 You only need to chop up three ingredients for Stewart's dish, and it all takes less than five minutes.

I started by halving my cherry tomatoes, per her instructions. Stewart recommends quartering the tomatoes if they're big, which I did for some of the larger pieces.

Then, I thinly sliced my onion and a few cloves of garlic. 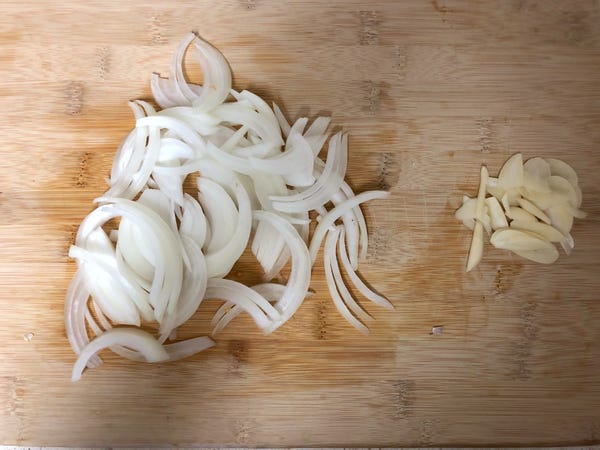 You know that scene in "Goodfellas," when the mobsters are all in jail together and make that beautiful Italian feast? That is exactly how I felt as I carefully sliced through my onion and garlic, watching as they nestled together just as they had in Martin Scorsese's famous shot.

I didn't use a razor like Paulie, but I was still pretty proud of my handiwork. Plus, my prep was already finished.

Unlike most pasta recipes, you don't bring the water to a boil before throwing the noodles into the pan. 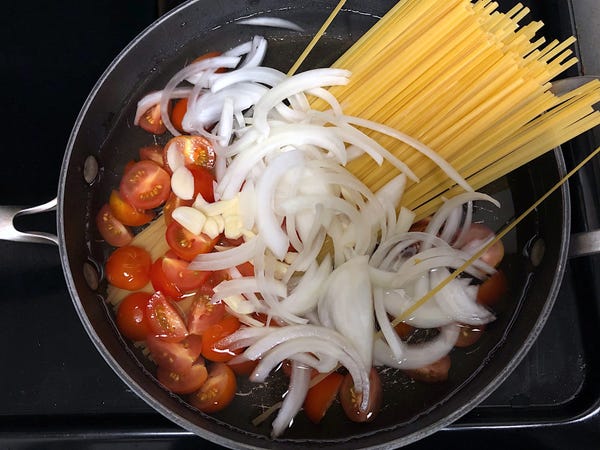 Stewart's recipe requires that you throw everything into the pan at once for maximum ease.

I accidentally put the four-and-a-half cups of water into the pan first instead of last, as Stewart does it in her cooking demo. Thankfully, though, it didn't make a difference.

Then, I added my linguine, cherry tomatoes, onion, and garlic.

I topped it all off with Stewart's required seasonings. 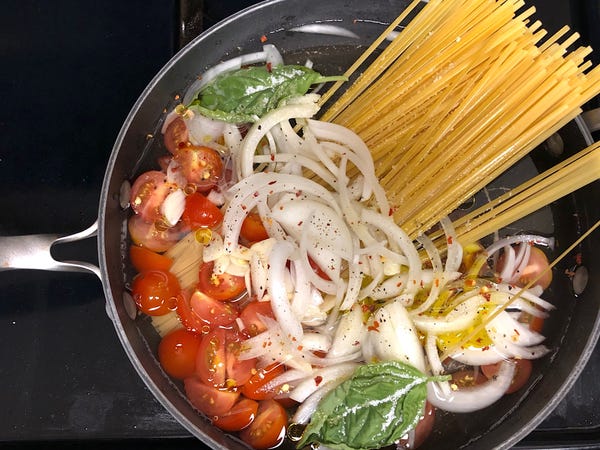 Once all the ingredients were in the pan, I thought the dish already looked quite beautiful. 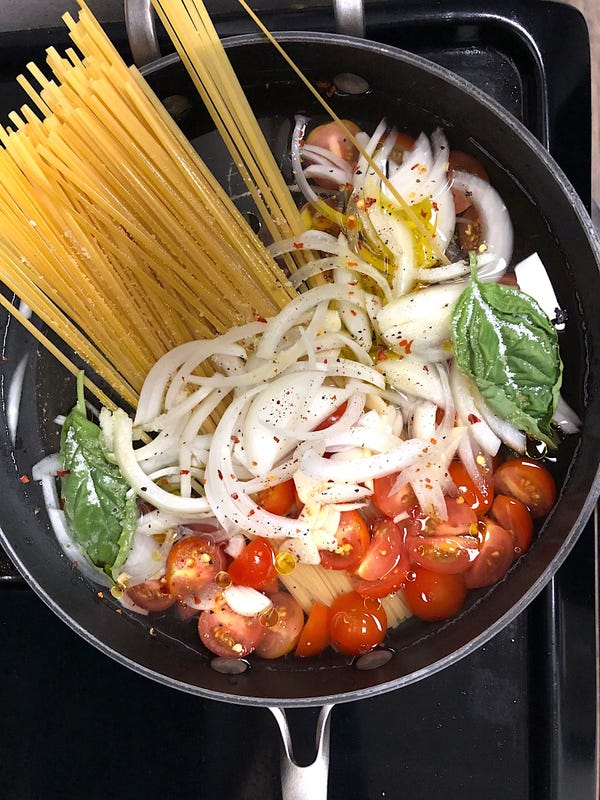 The tomatoes and basil looked so bright against the yellow of the linguine, it reminded me of spring. I wondered if the dish would end up tasting as fresh as it appeared.

Then I turned on the stove, and struggled to mix everything at first. 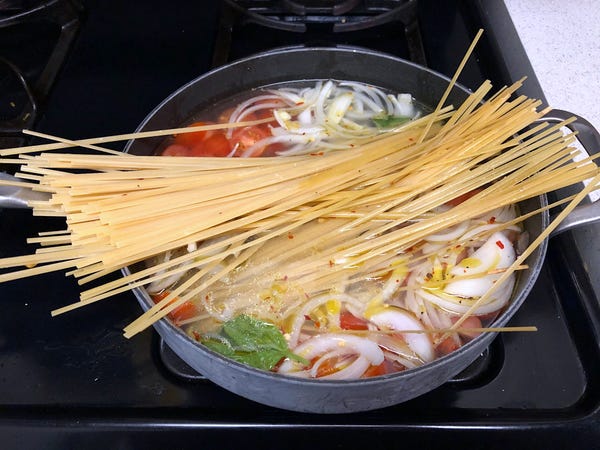 Stewart's recipe instructs you to stir and turn the pasta "frequently with tongs," which was definitely a challenge at the start.

I didn't want to break the pieces of linguine, so after a few failed attempts I decided to let the pasta soften a little.

After a few minutes passed, the pasta was fully submerged. 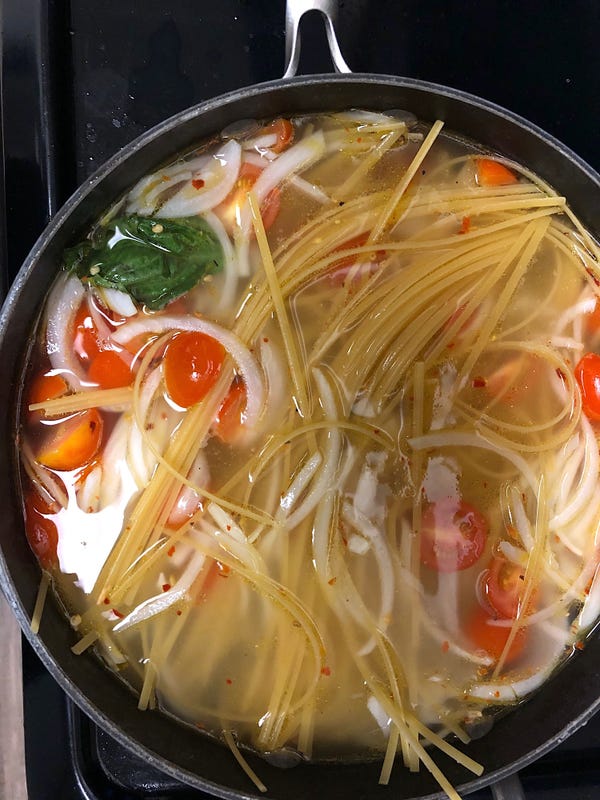 The pan almost looked like a clear chicken noodle soup, or an Italian spin on pho. It felt weirdly therapeutic to watch the pasta move around in that clear broth as I delicately turned the linguine with my tongs.

And it wasn't long before the water started to really boil. 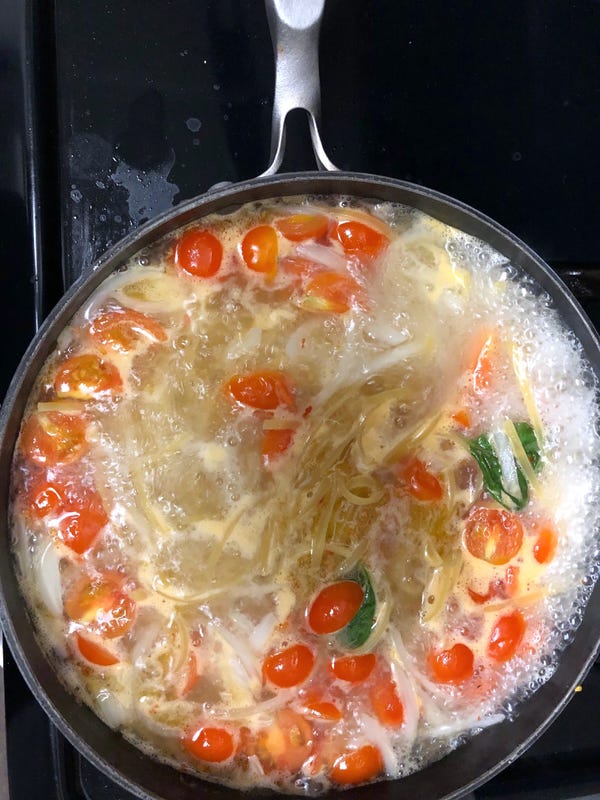 The top of the pan was covered in little bubbles as I continued to flip the pasta.

It was around this time that the entire kitchen filled with an incredibly fresh aroma, just as Stewart had promised. Even my roommate Joe looked up from his NBA playoff game to exclaim how good it smelled from the living room.

I frequently checked to see if the pasta was al dente, per Stewart's instructions. 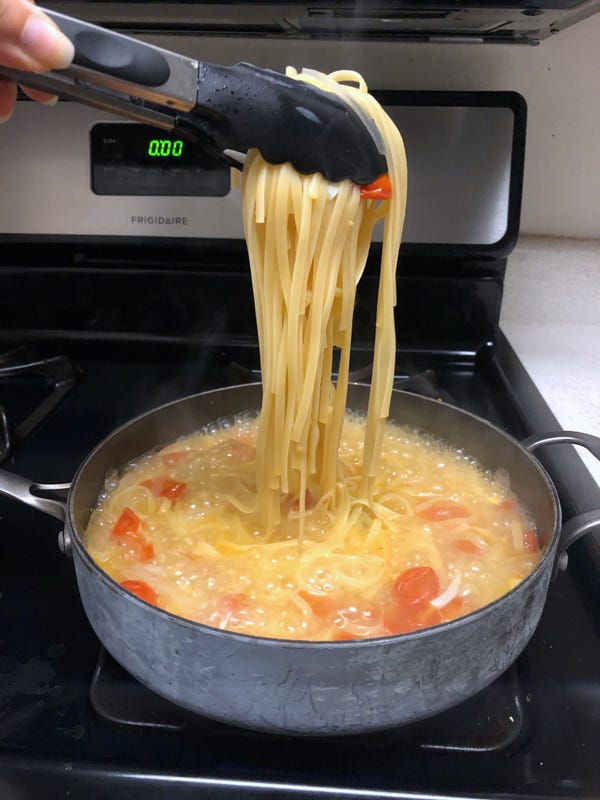 I used my tongs to grab a noodle from the pan and drop it into my ladle, splashing some cold water on it before taking a bite to see if the pasta was ready.

The second time I tested a noodle, around the 14-minute mark, I could tell that the flavors from the tomatoes, basil, and seasonings had infused into the linguine.

Overall, it took 20 minutes for Stewart's pasta to cook. 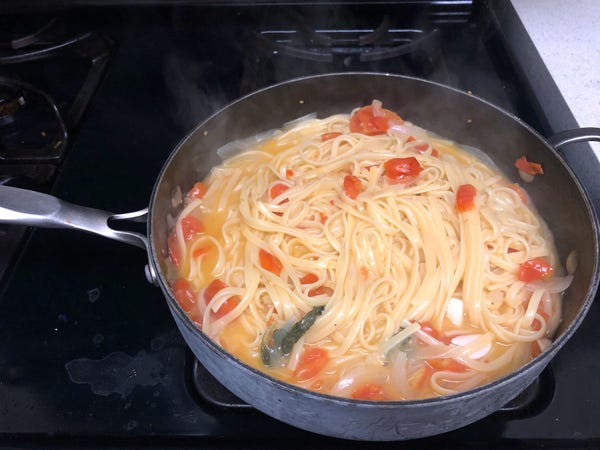 While Stewart's website said the pasta should take "about nine minutes," the recipe also states that the water will be "nearly evaporated" when the dish is ready.

It wasn't until the 20-minute mark that I could see a significant drop in the pan's water level, and it took just as long for the noodles to cook. Since Stewart herself had told me that the pasta is usually ready in about 20 minutes, I wasn't too worried about waiting it out.

I used my tongs to plate my noodles without the extra water in the pan, and topped everything off with plenty of freshly grated parmesan. 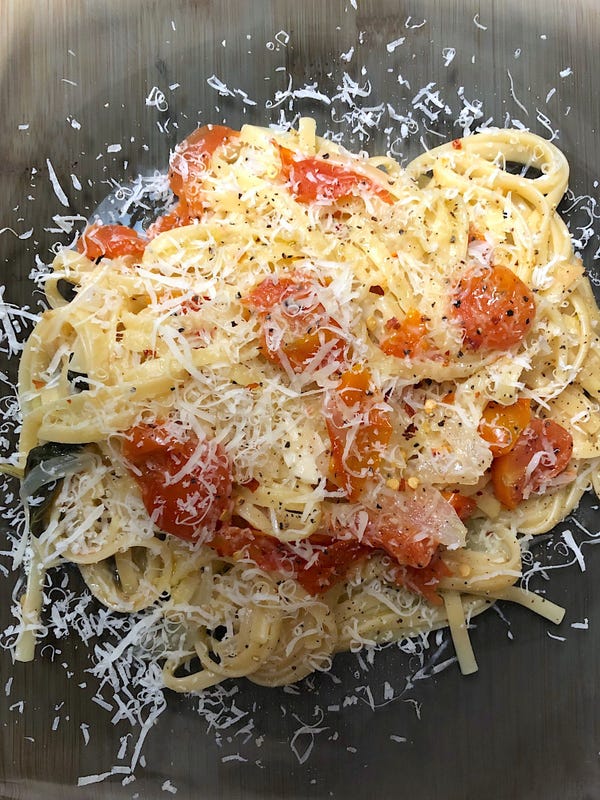 Stewart's one-pan pasta is really light, but there's a hint of richness to the dish thanks to the olive oil and tomatoes — which had a nice, blistered texture.

While the dish definitely tasted fresh — and paired great with my glass of rosé — I thought it was just a tad plain. I did find, though, that I was able to get a lot more flavor out of the noodles once I added more pepper and crushed red pepper flakes.

I would definitely try Stewart's one-pan pasta again — with a few changes. 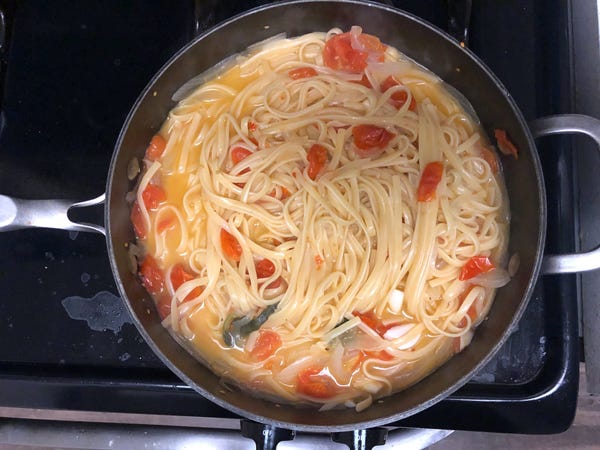 Next time I'll add more basil, which I think could have really brightened up the flavors, as well as more tomatoes — which were my favorite part of the dish.

I saw in the comments on Stewart's recipe that some had tried the dish with chicken stock instead of water, which I think is a great idea, while others discussed sautéing the onions and garlic first. While that does technically defeat the purpose of a one-pan recipe, I do think it's a modification worth trying.

Overall, I still enjoyed cooking Stewart's one-pan pasta, which really surprised me given my ongoing case of kitchen fatigue. It was soothing to watch all those ingredients spin around one pan as my kitchen filled with delicious smells.

Plus, Joe put it best when he took a bite of Stewart's dish.