IMHO, few things in life compare to the delicious combination of melted cheese and carbs, and Pizza Hut is giving us the best of both worlds just in time for football season. To be honest, Pizza Hut’s new Stuffed Cheez-It Pizza is the mash-up I never knew I needed for my game day spread, but now that I know it exists, I’m so here for it. You’re basically treating your tastebuds to giant Cheez-its that have been stuffed with your choice of gooey sharp cheddar or pepperoni, and just judging from the pictures, I have a feeling that they will be a hit with your game day crew.

On Tuesday, Sept. 17, Pizza Hut announced that it was unleashing these bad boys into the world and gifting its customers an unexpected twist on what are arguably two of the most popular snacks for people to chow down on during a game: Pizza and Cheez-Its. To sum up the new offering, it’s basically like your go-to cheese or pepperoni pie and the sharp cheddar crackers had a baby, and I’m just wondering why no one thought of this crave-worthy, albeit unusual, combination before. After all, when cheese, carbs, and marinara sauce are involved, what can go wrong?

Contrary to the name, you’re not getting an actual pizzas that’s stuffed with Cheez-Its — in fact, it’s like the other way around. Per the press release, you’l be getting four baked giant Cheez-It squares, which have been dusted with the real cheddar cheese that you are familiar with from the OG crackers. Inside the jumbo squares is where the real magic happens, as each "crispy square is stuffed in true Pizza Hut style with either cheese or pepperoni and cheese" then served up with a side of marinara dipping sauce to really drive the pizza vibes home. 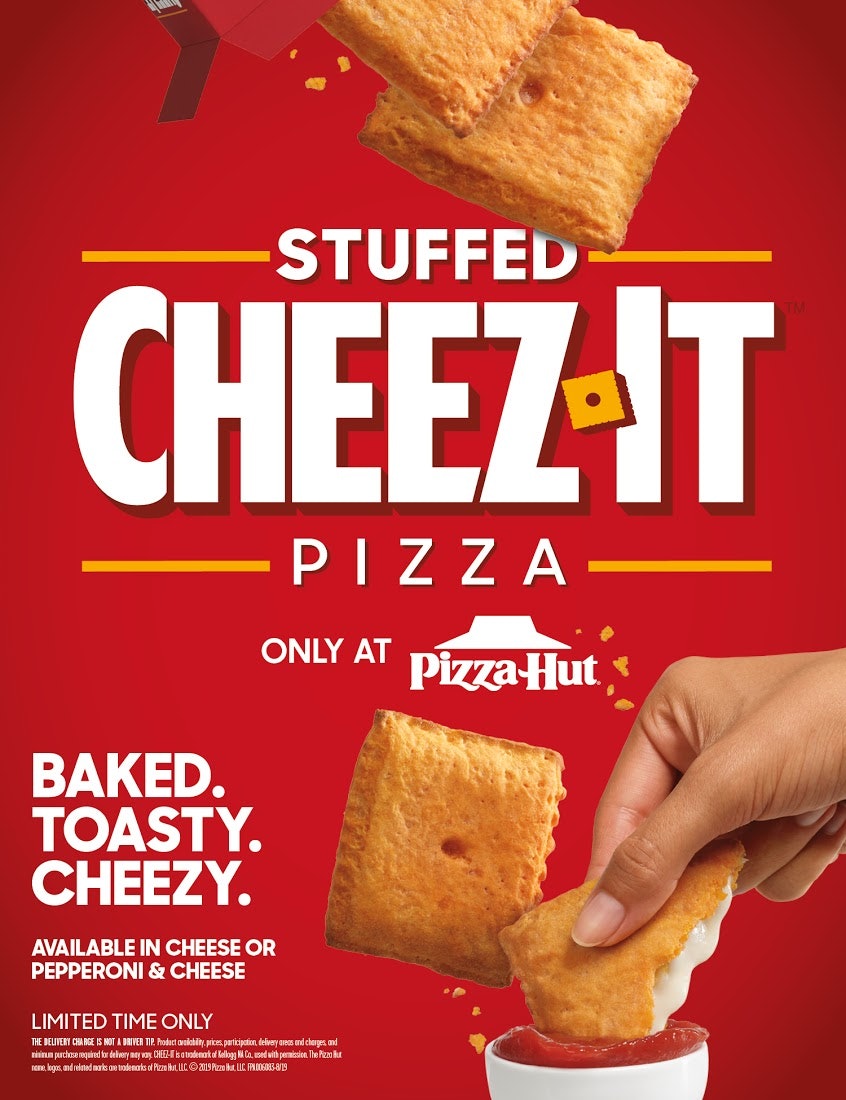 This tasty new offering is available for a limited time starting on Tuesday, Sept. 17 at Pizza Hut locations nationwide, so I’d map out a visit to the pizza retailer sometime this week or plan to make it a part of your game day spread in the coming days. After all, the Hut is no stranger to transforming their pies with other food items (hot dog crust pizza, anyone?), so I’m guessing that their latest creation is definitely worth trying.

Per press materials, you can order both the Stuffed Cheez-It Pizza with your regular pie without breaking the bank, as this new cheesy offering will be retailing for just $6.49. Starting on Tuesday, Sept. 24, however, it’ll get even more cost-effective when it becomes part of Pizza Hut’s $5 N’ Up Lineup. If you haven’t tried Pizza Hut’s game day menu before, you’ll basically be paying $6 for your jumbo Cheez-It squares when you buy two or more of the items on the lineup menu. Whether you choose to mix and match or go all out with numerous orders of the Stuffed Cheez-It Pizza is up to you.

Pizza Hut’s latest offering is just further proof that football season is definitely in full swing, so I’d check out the Stuffed Cheez-It Pizza as well as all the other goodies on the retailer’s $5 N’ Up Lineup so that you can keep your crew happy and fed during all the games ahead.