“You don’t realize how much weight you’re putting on when you see yourself in the mirror every day,” says Laurence Frappell. The 26-year-old nurse from Napier, New Zealand, had been fit and active as a youngster, but when he went to college alcohol became a big part of his life. He had undiagnosed ADHD; “I felt that drinking helped calm me down and give me more confidence,” he says.

At 17, his hair started falling out, which led to a crisis of confidence until he committed to shaving his head. In the meantime, though, he was eating and drinking to feel better; by the time he was 23, he weighed 213 pounds. “Even though the weight gain was gradual, it felt so fast,” he says.

Frappell needed a radical change—so much of his income was going to alcohol that he couldn’t afford healthy food. He moved back in with his parents to save money, part of which he put toward a gym membership and personal trainer, who taught him the basics of diet and exercise. He started doing a lot of cardio, alongside core exercises and, eventually, splitting his training days to focus on different muscle groups. As he started to feel better, he increased his workouts from three to five days a week.

He also refined his diet, starting by cutting back on his drinking. He cut out refined sugars and started eating small, regular meals. He used the Fat Secret app to track his calories and macros, aiming for high protein intake, about 2400 calories a day. He aims for 20 percent of his calories from fats, with the rest being complex carbs. “I have tried low carb diets,” he says, “but have found that my energy levels are much lower and for me it’s not a sustainable long-term diet.”

In the first four months he lost about 22 pounds. In 28 months, he’s lost 33 pounds—while putting weight back on with lean muscle. “I used to be too worried to smile because of how chubby I looked,” he says, but since then he’s embraced his “bald is beautiful” look and feels much more confident. He thinks that new confidence even helped him ace a job interview and land a new gig. He’s dating a doctor he met, who’s been teaching him how to cook. “She has been a huge influence on me,” he says. His family has been supportive too, even if his friends still engage in some ball-busting about his weight. He also got diagnosed with ADHD, which he now treats with medication rather than drinking. 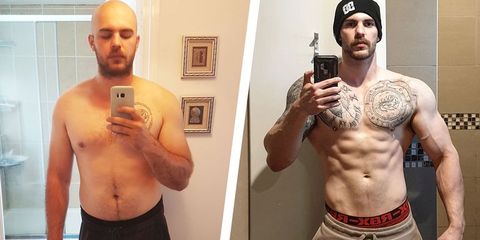 Figuring out his diet was a big part of his transformation, and he encourages everyone to look for alternatives rather than just drastically cutting calories. His newfound appreciation for broccoli rice and whole meal bread are examples. “Diet should be enjoyable, not a chore,” he says. “There are so many delicious and healthy meals out there.”