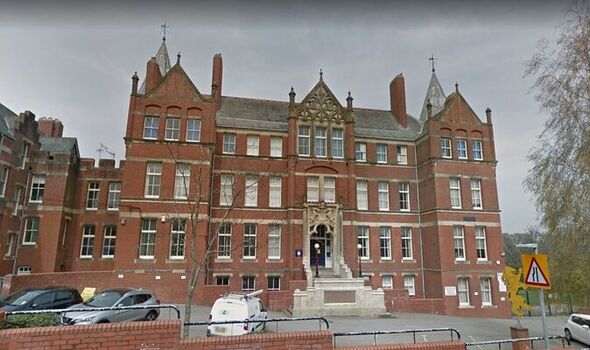 A mum has told of her shock after discovering her daughter was served a tiny school lunch consisting of three potato wedges and a spoonful of beans.

The pupil at West Monmouth School in Pontypool, Wales, was served the meal on Monday, November 7, and after asking the canteen staff for more food, they allegedly told her that it was the “normal potion” size.

However, in a letter sent out to parents, the headteacher said there had been an error in the kitchen, with pupils being served side portions instead of main meals.

She said the mistake came on the first day a new catering provider took over lunch provisions at the school, reports Wales Online.

The mother of one pupil, who wanted only to be known as Michele, shared the photo of her child’s lunch on social media after being sent the photo by her daughter.

The post was met with other parents responding with similar concerns about the portion size their children had received.

She said that lunches at the school were charged at £2.60 a day and that she was “disgusted” at the portion served to her daughter.

The mum later acknowledged that the school had written to all parents to apologise for the error.

She said: “She texted me on her lunch break to say, ‘this is my lunch today’, and I couldn’t believe it. I was shocked.

“I thought that they had made a mistake, so I told her to ask for more, and she said that she had but was told that this was a normal portion.

“She said a teacher had raised it too and was told the same.”

Michele said that her daughter had never had any issues with school lunches before and that this incident was “totally out of the blue.”

She said that the portion was “not near enough” for a child in year 11 of school, and also raised questions about value for money.

She said: “When you think about the cost of living too, and parents are paying £2.60 for that.”

After receiving a message of apology from the school that there had been an error and was reassured it was a one-off, Michele said that “it really can’t happen again” and that she was “so really hoping its all sorted.”

In a letter to parents headteacher, Emma Jordan said: “Many of you will be aware that our new catering provider – Aspens started yesterday and also that there were some perfectly understandable concerns raised by some parents in relation to the portion sizes and range of food available yesterday lunchtime.

“We take these concerns very seriously and I met with the manager of the new company first thing this morning to discuss the issues raised.

“It appears that yesterday’s issues were the result of some ‘teething problems’ with new menus and a few pupils having been incorrectly charged for main meals instead of the ‘sides’ they received.

“We have monitored both the break and lunch services closely today and the feedback from pupils in relation to the food offered has been overwhelmingly positive.

“Nevertheless, the company are still collecting feedback (via slips placed on the counters) and will be monitoring and acting on these.

“We also carried out a pupil-voice exercise prior to half-term about canteen provision and the views gathered on what the pupils would like to see in terms of both food and service have been shared with the new providers.

“We are really disappointed that some pupils were unhappy with their experience yesterday and I offer my personal apologies to those pupils.

“We are hopeful that our work with the new providers today has alleviated the issues but we will continue to monitor the provision closely over the coming weeks.

“In the meantime, I would ask any parents with concerns to contact us directly so that we can address them promptly.”