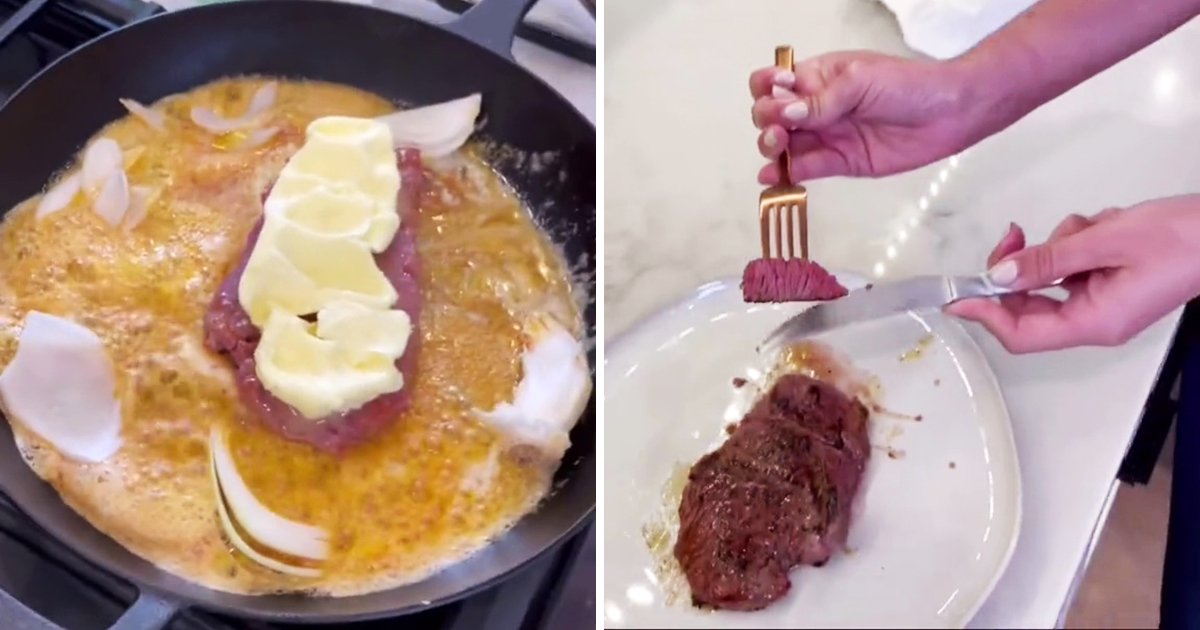 No matter how hard we try, eating steak at home is never the same as enjoying one in a restaurant.

From the flavours to the texture, the experts always get it right, and it’s hard to replicate in your own kitchen.

However, you too can have a restaurant appropriate steak in the comfort of your own home.

Its all thanks to TikTok user @tammylouiseee, who shared a clip of how restaurants apparently cook steak on her page.

So, to get the juiciest, most tender steak, all you need is butter – and lots of it.

In the clip the woman demonstrating the recipe says: ‘Forget going out to eat at fancy restaurants, this is the best.’

She goes on to place an entire stick of butter on the steak by covering it completely on one side.

Next she flips it over and repeats on the other.

All in all, there in an inch thickness of butter on the meat before she dresses it in taco seasoning.

To cook, she warms a pan to a low heat.

Once heated, she adds the steak and a pool of butter instantly appears.

She then seasons the other side of the meat, adds onions into the pan and flips it over, leaving it to cook.

To finish, the cook adds yet another stick of butter – the third used in total while the steak cooks and floats in the now bubbling substance.

Her friend then asks ‘does the butter soaks into the meat?’

To which she replies: ‘The butter soaks. It’s going to make it creamy, yummy, all good.’

She also adds that, ‘milkshakes don’t bring boys to the yard. Steaks do.’

However, those in the comments were not impressed with the supposed cooking hack.

The general consensus among viewers is that restaurants do not cook steaks in such a way.

‘Restaurants don’t do that, I’ve worked at restaurants and that’s not the way they cook. That’s just how she cooks, she just wants more followers,’ wrote one irritated user.

‘Having worked in four restaurants over 22 years – two of them steakhouses – I can confirm this is NOT accurate,’ added another.

It is yet to be confirmed whether the video is a joke made for TikTok purposes, but weirder hacks have been discovered on the app.

Other steak hacks to try

Back in November last year, a TikTokker called Juliette shocked viewers when she claimed you can cook a perfect steak in a toaster.

Despite reservations from viewers, Juliette told Metro.co.uk that the steaks cooked through fully.

‘It took about 20 minutes to cook on the highest temperature,’ she said.

‘The steak was amazing! I’m not just saying that to prove everybody wrong, but it actually cooked the steak perfectly.

‘I ate half of the steak and gave the other half to my roommate who enjoyed it aswell.’

Craig Harker, owner of The George Pub and Grill in Stockton-on-Tees, Durham seemed to confirm the hack on his eatery’s Facebook page.

Having first tried it with a rump of steak, Craig said he seasoned it well because that helps to get a good finished result.

‘I played around with the settings on the side and the first one popped up too rare so I put it down for a second time but then we overcooked it,’ he explained.

‘It was trial and error but when we put the third steak down, it came out medium rare and was pink in the middle but well done on the outside.

‘It tasted really nice and was red hot; if someone doesn’t know how to cook a good steak just whack it in the toaster.

‘I won’t be serving it to anyone but it’s fun to show people.’

Then if you fear overcooking your meat, try the reverse sear.

This involves not only frying your steak but roasting it too. It’s popularity is due to the flavour it adds.

First you roast the meat on a very low indirect heat for 45 minutes to one hour. Then using a thermometer make sure the steak is warmed to 52 degrees celsius. Following on from this cook the steaks for one minute on each side in an extremely hot pan.

Let it rest for 10 minutes and cut and slice.

Furthermore, there are one or two tips to always remember when cooking your steak.

Experts advise to pat dry your steak with kitchen paper prior to seasoning and cooking. This allows the steak to develop a decent crush.

Meanwhile, almost all chefs agree you shouldn’t cook your steak straight from the fridge.

‘An hour or so before grilling, take it out of the fridge so steak comes to room temperature,’ says Donatella Arpaia, US restaurateur and TV personality.

This ensures the meat cooks evenly and makes it even easier to achieve your desired cooking result.

Do you think the buttery steak is a TikTok fail or a stroke of genius?

Let us know in the comments or email [email protected]