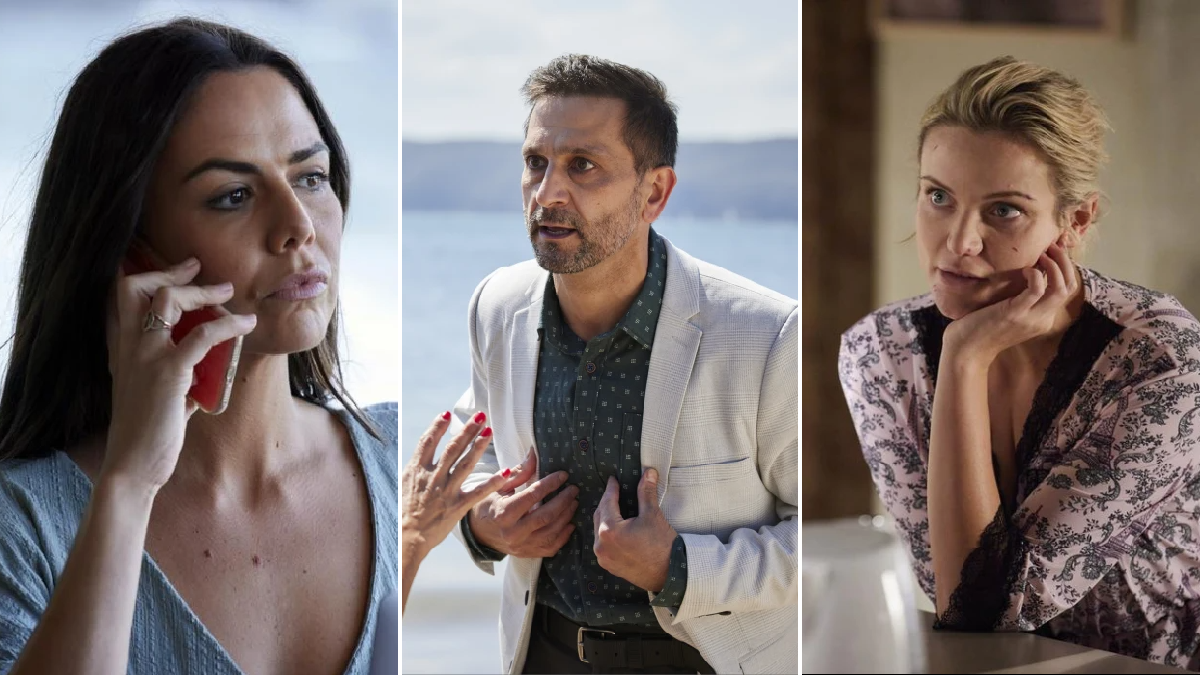 This week in Home and Away, Chloe (Sam Barrett) overhears Tane (Ethan Browne) and Mia (Anna Samson) talking about plans to take her away from the Bay – and she’s furious.

What right does her Mum have to decide where she’s going to be living? She’s an adult! Just as mother and daughter are starting to reconnect, it looks like Mia’s decision to escape all the reminders of Ari (Rob Kipa-Williams) is about to backfire.

Clutching at straws, she goes to the Farm House and recruits Ziggy (Sophie Dillman) for a ‘Bucks Party’. Dean (Patrick O’Connor) is suspicious when he sees Ziggy all glammed up, and his concern turns to fury when he follows them to Salt and sees his girlfriend being propositioned by a drunk gambler during an illegal event…

Here’s what’s coming up on Home and Away for the week beginning Monday 23 May.

Chloe is furious when she discovers Mia’s secret plans

Mia has dropped a bombshell on Tane, revealing that she is going to leave the Bay and take Chloe with her. Tane feels that Mia won’t have the support system she needs, but Mia is determined to tie up loose ends and gets the documentation drawn up to sign over the gym to Tane.

The Parata brother also feels that Chloe may not agree with leaving, but Mia is confident it will be best for them both. Tane and Mia end up arguing in the gym about it, and Chloe overhears them as she enters, looking for her mum. She is furious and lashes out at Mia – how dare she make decisions for her without even consulting her first?

Roo has become increasingly agitated as she waits for an update from Alf on Martha’s health, as the pair have been in Merimbula for a while now.

Irene tells her to be patient and have faith in Alf, but as time goes on Roo’s agitation only worsens. Irene sympathises with her struggles and agrees to accompany her down to Merimbula, but just as the pair are preparing to leave Alf finally calls with an update.

Although Roo is relieved to hear that Martha is okay, she still feels there are unresolved issues to fix – so the two women get into the car anyway and hit the road.

Rose is confused by Xander’s decision to stay in the Bay, and struggles to find common ground with Jasmine.

Xander and Jasmine, on the other hand, are getting along like a house on fire, with Jasmine planning an afternoon of adventures and Xander booking more time off work.

Rose eventually finds it too much, and declares she’s going to leave the Bay. Jasmine is disappointed, but nobody can change Rose’s mind and she drives back to the city – not before she has a word with her brother. ‘Be careful around Jasmine’. Xander is left stuck between the two feuding sisters, while Jasmine feels that she’s caused a fight between them…

Mackenzie has only just returned from her trip to the Hunter Valley with Logan, but she’s hitting the ground running by getting the next poker night organised.

Felicity is on top of all of the arrangements – until Tane needs her, and she drops out at the last minute to spend the night with him.

Mackenzie is desperate to get Felicity in for the night, offering her double wages and matched tips, but Felicity won’t budge. With the clock ticking, Mackenzie thinks about who else could help her – then she shows up at the Farm House with a request for Ziggy…

Dean walks in on Ziggy being propositioned by a high roller

Ziggy is happy to help Mackenzie out when she says she’s short-staffed for a ‘Bucks Party’. However, Dean is suspicious and concerned to see his girlfriend getting glammed up for what he understands will be a night of serving drinks to drunk men.

The two women leave, and Dean is at a loose end. He calls Logan and the doctor comes over, but when it becomes clear they have no idea what Mackenzie is doing in Salt, Dean decides to go over there. Logan is called away to work, but Dean enters Salt and is furious to see Ziggy being propositioned by a gambler as a poker night unfolds around them…

Martha surprises Roo with an unexpected change of heart

Martha has discharged herself from hospital in Merimbula and asked Alf to take her back to the Bay. Roo is shocked that Alf let her travel in such poor health, but Alf says that Martha was insistent upon speaking to her daughter.

Roo begins suspecting that there’s bad news on the horizon, but she is stunned when Martha finally reveals what’s been on her mind. She wants to go ahead with the transplant – if Roo is still happy to do it. Roo is shocked and surprised…but will she say yes to the procedure?

Ryder is shocked to discover the truth about Theo’s past

John asks Ryder to check in on Theo, as he’s got some stuff going on at the moment. Ryder dutifully goes over to his friend’s place – only to walk in on a heated father and son argument, which looks like it’s about to boil over.

Dimitri hastily retreats, but Ryder asks Theo what’s going on. Theo is reluctant, but Ryder encourages him to open up and Theo reveals the truth about the abuse he suffered from Dimitri as he grew up.

Ryder is shocked and says Theo has to tell the police, but Theo feels powerless and says that as there’s no proof, so he can’t do anything…

Dimitri punches Justin and leaves him unconscious in the garage

Dimitri has been trying to get through to Theo and get him back in the city to compensate for his wife leaving him, and after a few arguments he manages to get his son sat opposite him in Salt.

He tells Theo that his parenting was all about instilling the right values in him, and Theo begins to soften. However, Leah quickly learns what’s happening and tells Dimitri to stop being manipulative.

Theo realises his Dad was playing him and tells him to leave. Dimitri does so – but not before he storms into the garage to take out his rage on Justin, punching the mechanic in a violent outburst and leaving him unconscious on the floor…