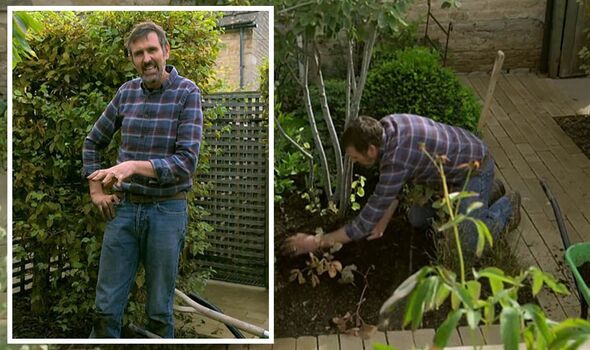 Adam Frost hosted the third episode of the Gardeners’ World Winter Specials this evening, during which he showed viewers how to grow climbing plants to cover dull surfaces in the garden. He built a rose arch from scratch and started a new blackcurrant plant to cover a dull wall in his garden, though his most important tip was to give your garden soil some “much-needed love” by adding mulch. The gardening expert revealed the best time to do it to avoid killing your outdoor plants.

Adam explained that mulching is essential to make sure all the “time and effort” that goes into your garden throughout the year doesn’t go to waste in the cold winter months.

Ever since moving to his new property, the Gardeners’ World presenter had been looking to “improve the soil” in his garden.

He said: “I’m in a really sort of dry part of the county, so really started mulching properly from September. Make sure there’s some moisture starting to appear in the ground, and then lock that moisture in. And I’m just carrying that through to probably next March, April.

“If you’re somewhere that’s slightly wetter, then your window becomes shorter. So you’re probably not going to mulch until going well into next spring, because I think if anything kills the plants, it is that winter wet more than the cold.”

While there are several ways to do this, Adam recommended mulching if you’re looking to tackle the problem in winter. He acknowledged that it can “feel like a big investment” to keep up with, but it’s “definitely worthwhile”.

When it comes to choosing the right ingredients to mulch with, the gardening expert noted that you have a few options.

Adam said: “It could be your own compost, the green compost that you can get from the council. Just do a little bit of research. A lot of this stuff we can buy in bulk. Maybe something you could do with a neighbour.”

No matter how you choose to finance it, the main thing to focus on is the contents of the mulch.

The Gardeners’ World host explained that he used around 50ml of well-rotted manure with a little bit of composted bark into the soil.

He said: “It will keep the weeds down. But also for me, the most important thing is, over time, it will rot down and it’ll put goodness back into that soil.”

According to Adam, the mulch should be focused around wooded plants like trees and shrubs. The TV gardener noted that you should make sure to keep the compost back as you don’t want the mulch “around the throat” of the plants.

He said: “What that it will do is it will start to damage the bark and slowly kill the plant.”

For herbaceous plants, Adam noted that you can mulch “in and around” them. He explained that if you’re in a drier part of the country, you should already be mulching your garden.

During the episode, the Gardeners’ World host also showed viewers how to “save space” by growing a blackcurrant plant against a fence.

He planted the fruit in a tucked-away section of the garden that was a “little bit dark and dingy”, branding it a “waste of space”.

After filling the back in with soil, he noted that he had hung several horizontal wires across the fence which provide support for the plant to grow.

The Gardeners’ World host noted that the fruit normally comes on last season’s growth so it tends to fruit really well on quite young growth, but up against the fence, it will different.

Adam added that “it is an experiment” and “will take time” to fan out across the fence. Before leaving the blackcurrants to grow, he tied the wire in a figure of eight so that the stems don’t rub on the wires.