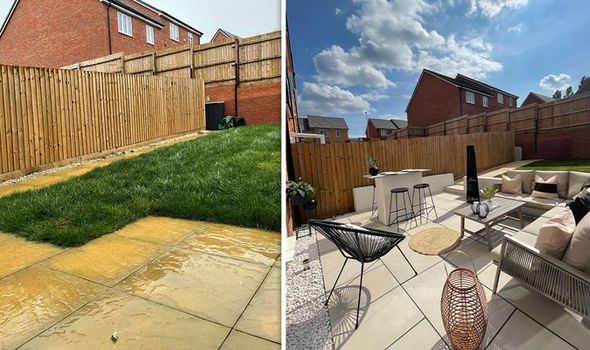 Birmingham couple Anna Hoban, 33, and her partner Tom Ellens, 25, were quoted a staggering £6,000 to transform their garden into a luxury space but managed to save more than £4,000 doing it themselves. The couple moved into their home in September 2020 and wanted to renovate their garden so they could enjoy it in the summer. However, the thrifty homeowners were taken aback when they were quoted £6,000 for the work.

Anna, who is a headteacher, described the original garden space as “tiny” with a “yellow patio” that the couple hardly used.

“It was on an incline and it was just grass,” she added.

The eye-watering garden quote spurred the couple to get creative and savvy.

Rather than spending money on equipment, the couple decided to borrow gardening tools from their family to get the job done.

She continued: “I had an idea of what I wanted the garden to look like – I liked the idea of stepping out onto a patio and I wanted a large patio area so we could use it as an outdoor living space.”

Anna and Tom decided to look around for the best deals rather than choosing the first thing they came across.

“That’s how you get the best deals,” she added.

Anything the couple didn’t use, they sold on Facebook marketplace.

To get rid of the rubble in the garden, the couple hired a skip and drafted in Tom’s dad to help.

The first task on the couple’s to-do list was to level out the garden.

Luckily, Tom’s dad was a “huge help” and had previous experience with gardening.

Tom explained: “We drew a diagram out on a piece of paper and worked around that.

“We knew what we wanted it to look like but we had to just take it bit by bit.”

The transformation is simply stunning and includes new white paving slabs, stones, an outdoor sofa, a dining area and a white brick walls to segment the garden.

The couple have still managed to keep some of the lawn which adds a touch of greenery to the outdoor space.

Tom said they key to the project was to focus on one section at a time.

The couple posted the before and after photos on TikTok which led them to go viral.

Here’s the total cost and breakdown of the garden transformation:

Paint provided by Lick as part of an Instagram collaboration