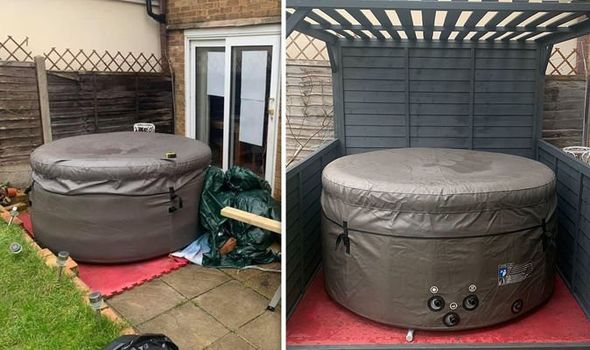 Mum-of-two Simone Fennelly from Essex told money-saving community LatestDeals.co.uk she decided to create a hot tub shelter after weeks of enjoying the sun in her garden during lockdown. The 35-year-old said the family were thinking about all the places they would rather be during lockdown but couldn’t. Instead, the family focussed on making their garden look more inviting, which included having a structure over the hot tub.

Simone, who posted on Instagram as fenn.fam, said once the weather began to cool down and become more autumnal they wanted to keep the hot tub more protected.

The mum of two children aged 10 and seven said she started looking online for a shelter and noticed how expensive they were.

She said: “I searched online to see how much these types of structures would cost and the prices were so high – for the type I wanted it would set me back £500!

“I just laughed as, for what they were, I was not ever going to pay that amount of money.

“Instead, I made a sketch based on a couple I’d seen and the kids added some bits, such as a step for Aimee and towel hooks for Keira.

“And of course John wanted somewhere to keep a drink cold.”

Once Simone confirmed the design, she began shopping for supplies.

She looked on Wickes’ website and ordered two standard fence panels for £54 which were 6x6ft.

She added: “Those wanting to do a similar project may prefer to get one 6x6ft panel and two 3x3ft panels, but it’s cheaper to buy the two 6x6ft panels and chop it in half!”

Simone also bought a packet of roof battens for £32, a large tin of fence paint for £21 and decking screws for £6.

The DIY-savvy mum saved money on timber by using off cuts leftover from another project and some her dad had.

She also had rubber floor mats that she recovered when a local business was being refurbished.

Looking for a new home, or just fancy a look? Add your postcode below or visit InYourArea

The solar garden string lights were already in the garden.

After gathering her supplies, Simone began building the structure.

First, she removed the curved part off the top of one fence panel to use later on.

She then made a frame around the fence panel and cut the second fence panel in half to make the sides.

The curved part from the first panel was put on top of the bottom half of the second panel, so both side panels had a neat, curved top.

Simone’s next step was to frame the side panels to the height of a full panel.

She explained: “Then I framed the roof and floor. To add support I added corner struts.

“A centre post was added across the roof for strength. I cut the floor mats to size and fitted them.

“Then, I added the roof slats. I painted the entire structure in a slate grey colour, using two coats.

“With leftover battens and slats from the main project I made steps.

“Then I measured the space, made a batten frame and added slats to cover the frame. This was also painted grey.”

Lights were added around the roof slats and onto one of the posts with hooks.

Find out more from LatestDeals.co.uk here