Kelly Ripa and Mark Consuelos may be empty-nesters but that doesn’t mean they’re not getting into the festive spirit.

The couple are proud parents to their three grown children, but also adoring owners of their two pet pooches too – and they were front and center during a recent makeover at their $27million townhouse.

Kelly took to Instagram and showcased Lena and Chewie’s Christmas attire and gave a sneak peek inside her impressive home at the same time.

WATCH: Kelly Ripa shows off her phenomenal library in her home

The mom-of-three attempted to capture the pooches in their adorable sweaters as they appeared to marvel at the enormous baubles which Kelly had placed in her home.

She’d also added nutcracker decorations to the bottom of her impressive staircase where Lena and Chewie were finally captured in all their Christmas glory. 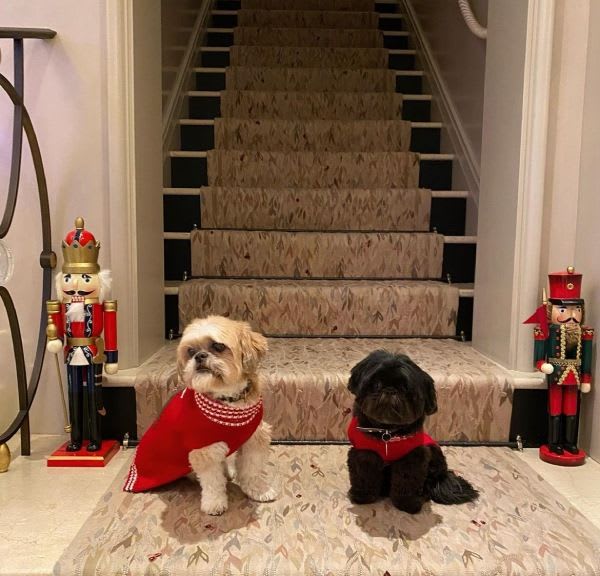 Kelly and Mark recently unveiled their amazing family tree. The presenter took to Instagram to show off her stately tree illuminating her beautiful Upper East Side pad, and she sure knows to kick off the holiday spirit.

The photo revealed her perfectly lit and decorated tree, which almost touched the high ceilings of her living room.

Kelly’s oversized ornaments were a hit with fans

It stood between two love seats and a set of glass double doors, which lead out to a balcony that also has been decked out in greenery and string lights.

The tree was decorated with a simple star at the top, and some of the ornaments include an orb with the Union Jack on it, surely to commemorate the recent vacation the couple took to visit their daughter Lola, plus an ornament in the shape of an avocado, and some other festive pieces.

Kelly’s Christmas tree is as festive as ever

“Isn’t she lovely,” the mother-of-three wrote in the  caption alongside a heart and tree emoji, and her husband Mark Consuelos quickly agreed, commenting: “She’s lovely.”