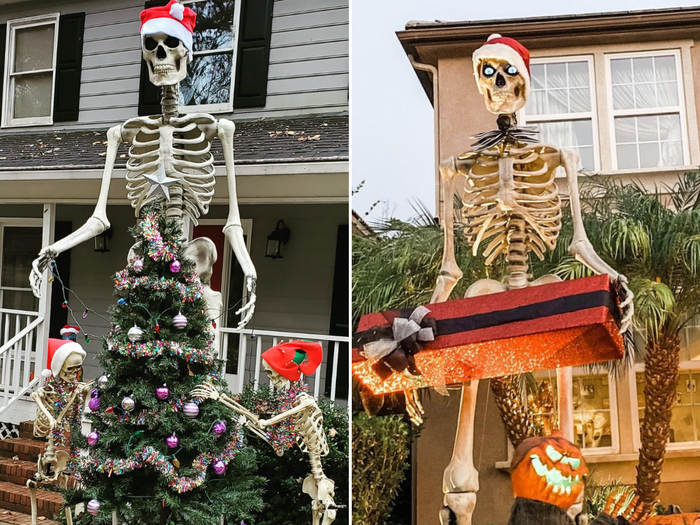 This fall, a 12-foot skeleton from Home Depot was the centerpiece of Halloween. The giant creature began popping up in neighborhoods across the country.

People rushed to Home Depot to get their hands on the $300 lawn ornaments. The skeletons sold out before October even began, driving record sales for the company.

Now that December has officially arrived, some skeleton owners aren't in a hurry to store the pricey decoration.

Instead, they've decided to repurpose their skeletons for Christmas and the holidays by adding a little holiday flair.

Jeanna Crawford, a professional holiday decor designer, told Insider that when she got her hands on the skeleton, she immediately brainstormed ways to add holiday spirit to the towering creature.

"I knew instantly he'd be a showstopper dressed in his holiday best," she told Insider.

With some help, Crawford said she built a Santa hat and a 60-inch sparkling present for the skeleton to hold in its bony hands.  She said she created a "Nightmare Before Christmas" aesthetic and that the skeleton has become the spotlight of her Christmas decorations this year.

Crawford said she plans to leave the skeleton up this holiday season.

"For now, he's here to stay!" she said. "Now, with everyone needing to stay apart, this is my way to connect to my community."

After the skeleton brought her family so much joy this Halloween, Tracy Gilbert said her husband and son were insistent on leaving it up for Christmas.

Gilbert said she initially refused. But after realizing that they don't have a place to store the enormous giant, Gilbert caved.

"I started thinking about, 'How am I going to store him in our house?,'" she told Insider. "Cause it's huge."

Gilbert's family purchased a fake Christmas tree, ornaments, and transformed a tree skirt into a Santa hat. They also left up a few smaller skeletons to make it look like a family of skeletons are all decorating for the holidays.

Now, her husband and son are brainstorming how to leave the skeleton up year-round. Gilbert said her husband found a large martini glass perfect for New Year's Eve, and they've brainstormed ideas for Valentine's Day, too.

While Gilbert doesn't plan on that becoming a reality, for now, she said the skeleton has brought her and her family joy.

"I can see him outside of my window, and he just makes me so happy. It's so silly," she said. "I've gotten my return on investment, which is just how happy he makes me."

The skeletons were originally inspired by haunted houses and trade shows

"The 12-foot skeleton was for the Halloween enthusiasts who aren't afraid to go the extra mile for the best of the best decor," Allen told Grindell.

This holiday season, it looks like the skeletons are also for Christmas enthusiasts.

Are you repurposing your giant Home Depot skeleton? Let us know how at [email protected]