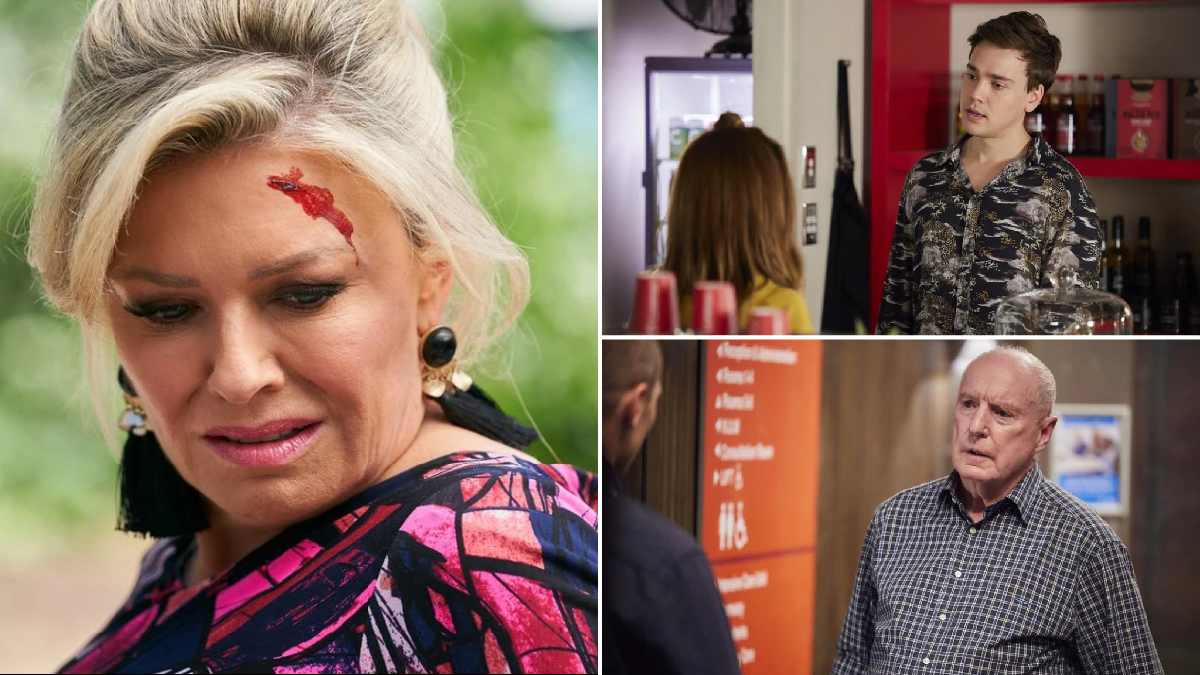 This week in Home and Away, toxic chemicals unleashed by a mysterious figure seep through the vents in Salt, and it isn’t long before people begin feeling its effects. Cash (Nicholas Cartwright) jumps into action and tells everyone to cover their mouths, but Martha (Belinda Giblin) and Marilyn (Emily Symons) begin to feel unwell – and when emergency services show up, they find Tane (Ethan Browne) passed out in the Gym…

Meanwhile, Theo (Matt Evans) is up to no good and implies to Nikau (Kawakawa Fox-Reo) that Chloe (Sam Barrett) slept with him on the night of Ryder’s (Lukas Radovich) birthday party. Outraged for her friend after Nikau tells her the news, Bella (Courtney Miller) struggles to contain herself and spills the beans when everyone is playing pool. Ryder is heartbroken and Chloe is furious – but it’s Dean (Patrick O’Connor) who ends up caught in the crossfire…

Elsewhere, Cash begins to grow suspicious of Felicity (Jacqui Purvis), despite not wanting to believe his own sister could be responsible for getting hold of toxic chemicals and harming people on this level. However, when Jasmine (Sam Frost) finds incriminating evidence near Felicity’s van, the couple both begin to fear that Felicity is hiding a sinister secret…

Here’s what’s coming up on Home and Away for the week beginning Monday, 3 January 2022.

Tane is working late in the Gym when he begins to feel dizzy. Before long, he finds himself on the ground, too weak to move. A mysterious figure in a HAZMAT suit looms above him, and he feebly cries out for help. However, the figure unleashes a huge container of toxic chemicals before disappearing. Later, when a HAZMAT team enters the building, they find an unconscious Tane on the ground and rush him to hospital. Who has targeted him, and will he survive?

Cash suspects Felicity is responsible for the devastation

Tane isn’t the only victim of the mysterious chemical attack – the vapours seep through the vents in Salt, where guests are attending Martha and Roo’s mental health fundraiser. Cash quickly figures out what’s happening and tells everyone to move away from the vents and cover their noses and mouths. However, as people begin to pass out and he discovers Tane is in critical condition, Cash is left wondering – could his sister possibly be behind this evil act?

When the toxic vapours first entered Salt, Martha began to feel its effects, sitting down as she felt faint and brushing off her symptoms as having had too much champagne. However, after Cash realises the cause is much more sinister, Alf is alarmed to find his wife’s condition rapidly worsening. He is adamant that she is first on a stretcher to hospital and refuses to leave her side. The situation doesn’t get better, as the machines Martha is hooked up to begin beeping frantically and Alf is rushed out of the room. When Logan comes out to speak to him, the verdict is grim – Martha’s organs are failing, so Alf should prepare for the worst…

Chloe makes a heartbreaking decision about her relationship

Chloe and Ryder have built up a strong relationship, even going into business together with their Mexican takeaway venture, but the foundations begin to crack when newcomer Theo arrives and makes it clear he’s keen on Chloe. Feeling insecure, Ryder convinces himself that the pair have something going on – and after asking her in front of his entire family if she slept with Theo, Chloe makes a final decision. To Ryder’s surprise, she tells him they can’t continue their relationship anymore because he doesn’t trust her – how will he take the news?

Theo is up to his usual tricks, but this time his behaviour is set to impact several people at once. In the aftermath of Ryder’s disastrous birthday party, Nikau invites him over to his place – where Chloe is cooking for everyone. Theo hints it will be awkward with Chloe after what they got up to on the beach, and Nikau is shocked to hear they slept together. Later, in the Surf Club, Nikau tells Bella the update, and she exposes him during a game of pool. The group of young adults quickly get into a messy row, and when Bella storms out, she knocks a barely recovered Dean to the ground, leaving him in excruciating pain…

Much to Felicity’s horror, all eyes are on her as the Bay reels following the chemical attack. Struggling to comprehend who could be behind it, all they know is that Felicity and Tane have had issues lately, and he was the one who got hit hardest – who else could it be? Although Cash is doubting his own sister, Jasmine remains supportive, and the pair head to Felicity’s van with a takeaway order. However, when Jasmine goes to put something in the bin, she discovers a receipt for an order of the exact chemicals used in the attack. Feeling shocked and dismayed, she takes it to Cash…what will they do now?

The Bay is slowly beginning to find a way through after the chemical attack, and those who are out of hospital are trying to return to their ordinary routine. Marilyn goes back to the Diner, but as she’s walking home in the evening after a shift she begins to lose sensation in her legs. She falls to the ground and her phone slips out of her hands, just out of reach. She’s left in the cold, on the floor in the pitch dark – will somebody find her in time?