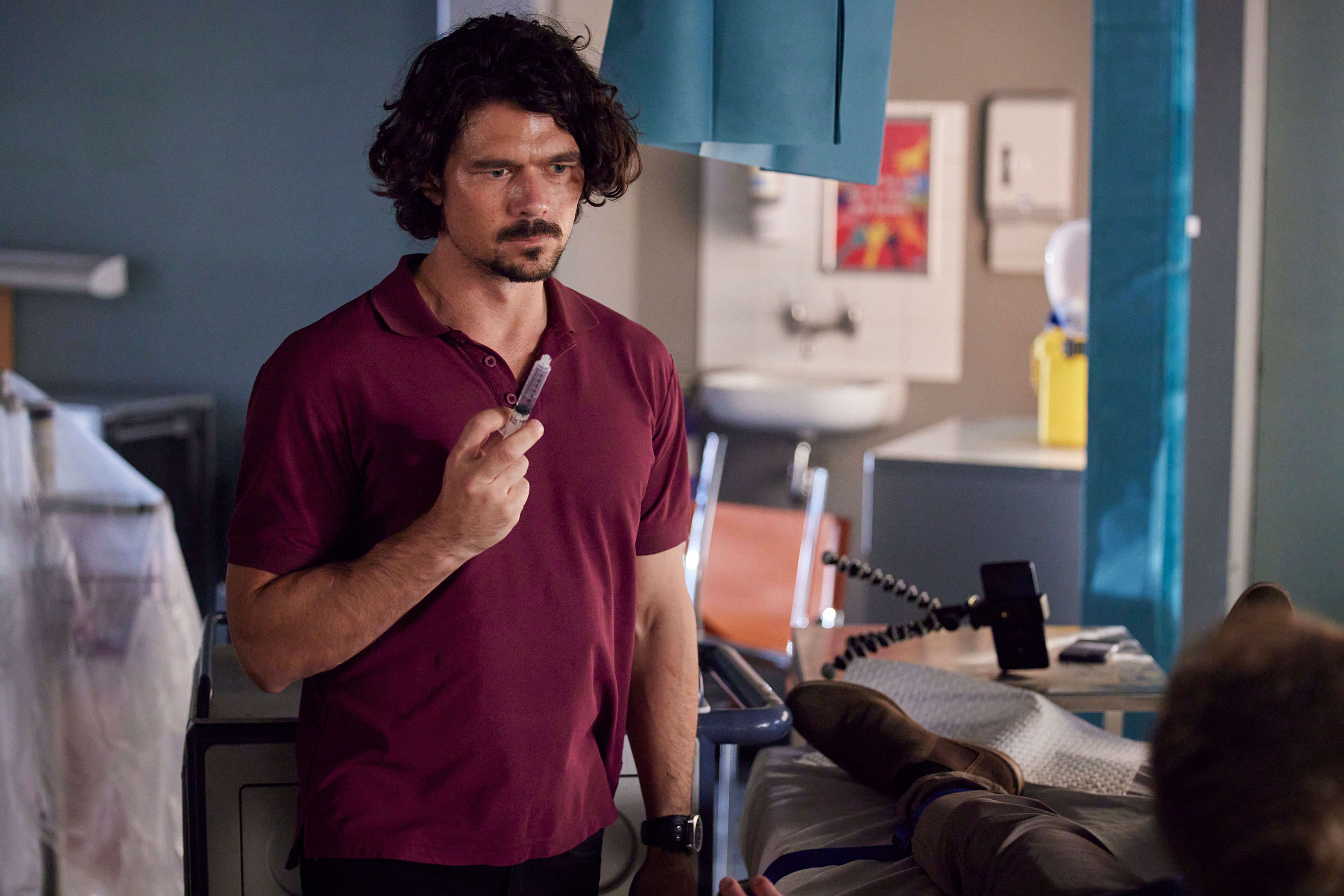 This week in Home and Away, Lewis’ (Luke Arnold) evil plans reach their climax as he drags Christian (Ditch Davey) to an abandoned section of the hospital and administers a lethal injection. Tori (Penny McNamee) and Jasmine (Sam Frost) hunt the pair down and discover them just as Christian’s heart stops – will they be able to save him?

Meanwhile, Ari (Rob Kipa-Williams) sees Mac (Emily Weir) being carried to hospital and begins to suspect he’s being kept in the dark about something. Plus, a lot of surprises are in store for Nikau (Kawakawa Fox-Reo) when he discovers an intimate photo of him snapped by Bella (Courtney Miller) has won a competition – and then a glamorous woman from the city wants to speak with him.

Here’s what’s coming up on Home and Away for the week beginning Monday 17 May.

Ari is on the balcony of Salt with Mia when he sees Ziggy and Tane carrying Mac to the hospital. He yells out to them, but Mac insists that he continue to be kept in the dark. At the hospital, Tori diagnoses Mac with an infection following her procedure and also offers her counselling material. However, Ari is determined to find out what’s wrong with Mac and presses Mia for an answer. Backed into a corner, Mia tells him the truth – Mac was pregnant.

Bella is working on an assignment when she receives a surprising email – a photo she has entered into a competition has won the top prize! Nikau is happy for his girlfriend until he sees the winning photo – an intimate snap of him sleeping. He is angry that she submitted the photo without his consent, but Bella doesn’t see what the problem is. Dean overhears the pair arguing and approaches Nikau later to tell him he needs to pull his head in…

Leah develops an obsession with Susie

Leah has been trying to find any trace of Susie online following her fraudulent activities in the Bay which resulted in her stealing over $90,000. However, she struggles to find any solid leads and begins to get frustrated when the police also have nothing new for her. She begins constantly checking her laptop and taking out her anger on Justin, much to his concern…can he get her out of this slump?

Lewis is determined to make Christian pay for the death of his late wife Anna, and drags him to an abandoned hospital ward before tying him to a bed. When Christian wakes up, Lewis makes it clear that it’s payback time. After unsuccessfully trying to get Christian to admit responsibility for Anna’s death on camera, Lewis hooks him up to a heart rate monitor and injects him with a lethal substance…

Tori discovers Christian and tries to save his life

Jasmine has recently told Tori she’s concerned about Lewis’ wellbeing, and the pair realise that Lewis and Christian are missing. After seeing both of their cars in the hospital car park, they search every ward in the hospital until they see Lewis standing over an unconscious Christian. A distraught Tori sees a heart rate monitor flatlining and immediately jumps onto her fiance to perform CPR – but is she too late?

Ziggy comes up with a plan to distract Ari

Despite the doctor’s orders being to rest, Ari is struggling to sit around at home and Mia finds him washing her car. When Tane and Ziggy return to the house, they realise Ari needs a distraction before he drives everyone crazy. The following morning, Ziggy shows up with an iconic motorcycle that Ari immediately recognises. She suggests that he and Tane fix the bike together, and he couldn’t be more thrilled.

John gives Mia a thorough grilling during her job interview

Irene tells John that she needs help interviewing candidates for the gym manager position, and although he is initially reluctant, it isn’t long before he throws himself into the task. When Mia shows up for her interview, John makes the experience as difficult for her as possible, grilling her with penetrating questions. Will Mia be able to handle the pressure?

Nikau and Bella have recently attended an awards ceremony in the City after Bella won a big photography competition, and when the pair return the next morning Bella receives a surprising call. A glamorous modelling agent wants to speak with Nikau urgently, and he is surprised to learn that he’s been offered a job as a male model. When he turns it down, the agent makes it clear – he’ll be earning some big money. Bella encourages him to at least think about it. Is Nikau’s future about to change dramatically?