A $200 million rescue package has been put forward from the federal government to restart the stalled Murray Basin Freight Rail network.

Work on the trouble-plagued project – which was meant to have standardised 1000 kilometres of track in Victoria's west – stopped in June last year, with the Victorian Auditor-General later slamming the Andrews government's mismanagement. 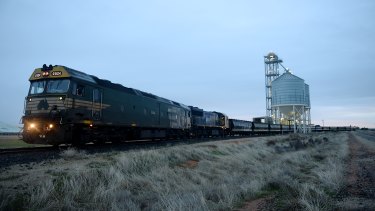 In May the federal Coalition was handed a revised business case that recommended further federal investment to kick start the work.

Federal Infrastructure, Transport and Regional Development Minister Michael McCormack said on Wednesday the package would fund the most extensive package of works recommended by the revised business case, which includes remedying key issues caused by works to date.

It also puts full standardisation of the network back on the table for the half-completed north-west Victorian rail freight network upgrade.

The Victorian government had requested the package following its completion of a revised business case and announced $48 million of additional funding in its October budget.

When the project was announced in 2014, it was touted as an opportunity to fix a century-old rail network and speed up and simplify the process of getting tonnes of produce to port.

The new plan involves the re-railing the Maryborough–Ararat line to improve journey times and increase axle loads to 21 tonnes and new passing loops as well as new or upgraded sidings at Maryborough, Donald and Merbein.

New sleepers will be installed on sections of the Sea Lake and Manangatang lines, the Mildura–Yelta line and Ouyen-Murrayville line to increase speeds, as well as structural assessments to see what works are required to introduce 134-tonne locomotives.

Mr McCormack said it was crucial that a reliable rail network was available to efficiently move grain, mineral sands, fruit and vegetables and wine and to encourage more of that freight off the road network and on to the rail network.

He said a key part of the rescue package was $5 million for planning to deliver a fully standardised network and he would ask the Victorian government to match the Commonealth's $5 million planning funding for robust plan for full standardisation.

"It is clear to both governments that there needs to be greater accountability for this project going forward, to ensure these works are delivered in a timely and efficient manner," Mr McCormack said.

The Victorian Farmers Federation said the announcement was a positive step forward towards ensuring the state’s outdated regional freight rail infrastructure is upgraded and standardised.

VFF grains group president Ashley Fraser said it was crucial that the agriculture industry had the means to efficiently and affordably transport their produce from paddock to port and market.

"As long as we continue to operate on two separate rail gauges in Victoria, farmers and industry will continue to bear the costs of an outdated and inefficient network," he said.

"The Victorian government must simply now come to the table and match the federal government's $5 million dollar planning commitment for the standardisation of the network."

Victorian Transport Minister Jacinta Allan welcomed the government's commitment and said having the funding announced and agreed to before Christmas meant works could start in the new year ahead of the next grain season.

"We don't want to disrupt the grain season, we want to get in there and start this work ahead of the next grain season which we can now do now that the Commonwealth have committed to this funding," she said.

Ms Allan said she has only learned of the addition $5 million commitment for further gauge standardisation work from the federal government last night and said it she was not yet in a position to match the funding.