When Tarot card readings are depicted in the movies or TV, they are usually shown as somewhat negative or foreboding. But the good news is that there are numerous Tarot cards that mean good things. Due to their ability to facilitate very profound self-reflection, many individuals seek out a Tarot reading that is specific to their relationships or future. And it isn’t always bad news, either! There can be some really beautiful cards, which show you aspects of your relationship that are working or unfurling positively.

Each of the cards in a Tarot deck represents something unique through its artistry and actions. The way that you interpret your cards is also incredibly specific and based on your perceptions and experiences. "The meaning of all cards are shades of gray, yet people have the tendency to label some cards positive and others negative," says Amber Jayanti author of Tarot for Dummies. It’s all about how you interpret their definitions.

If you’re interested in knowing about cards that bode particularly well for romantic relationships, cross your fingers that you pull one of the following cards in your next reading.

The Four Of Wands The four of wands is a joyous card that represents unity. "In this card, four wands support a garland and two dancing women uplift bouquets, suggesting celebration," Jayanti says, referring to the depiction of the card in the Rider-Waite deck. "An old manor dominates the card’s background suggestion tradition. The image symbolizes the value of coming together to honor old traditions, rites, and rituals as the worth of creating new ones." There’s also a great amount of symmetry on this card, with two wands on each side of the two people.

This can mean a lot of things for your relationship. Maybe you have started new traditions, or you feel like you have created a life together (the manor) and are continuing to move forward, celebrating your union. Perhaps you are about to embark on something involving unity, like getting engaged or moving in together. The flowers in the card are also very bright and signify that you are fruitful in some capacity of your togetherness. 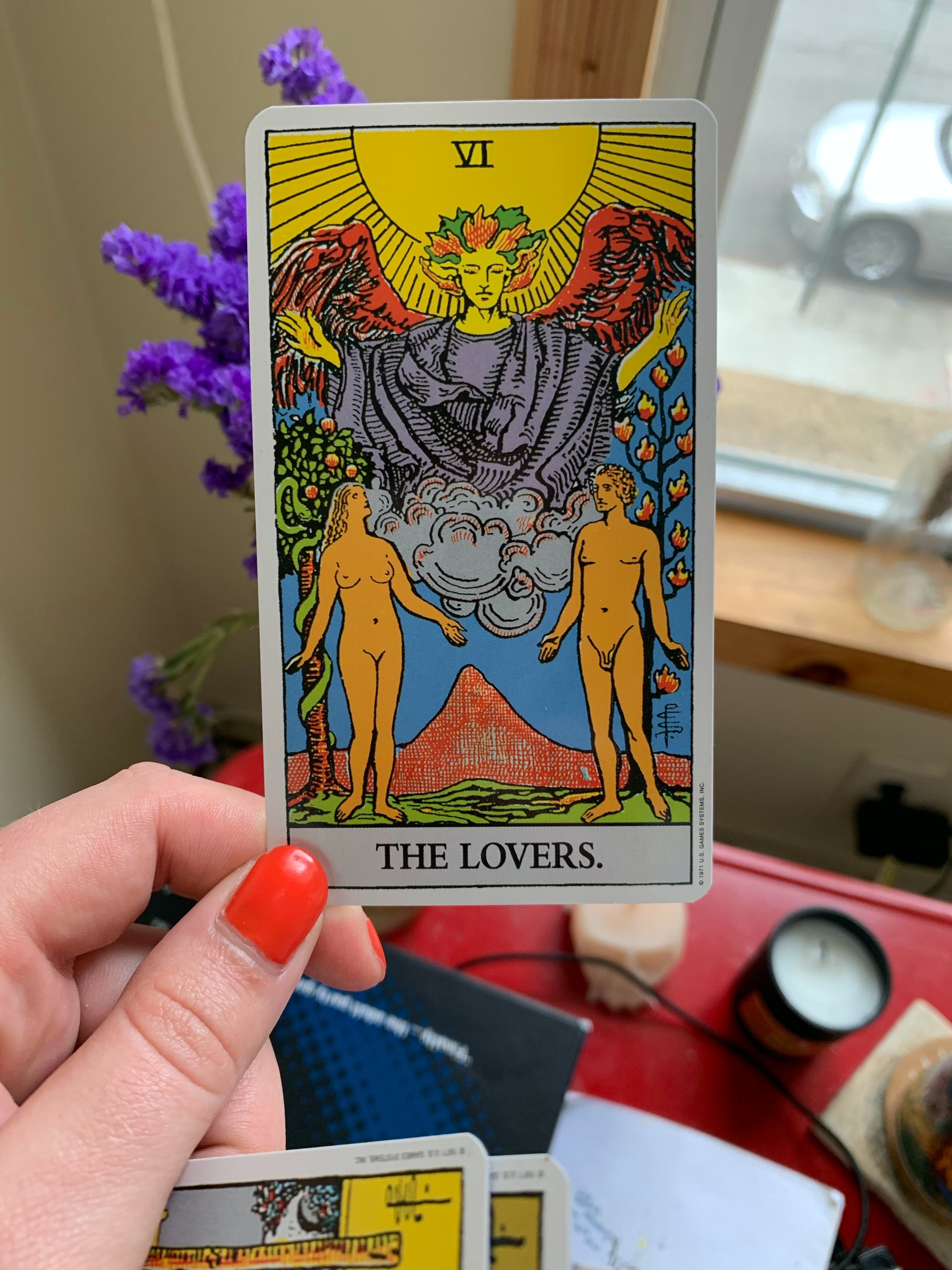 The Two Lovers depicts two people, naked, overseen by an angel. "The card hints that relationships have a reciprocal quality that can lead to self-healing," says Jayanti. The Lovers card is obviously very connected to the concept of relationships and romance, but the card is surprisingly much more about the idea of love as an entity that can move from you to yourself or you to another person.

This card can mean great things for your relationship, but it can also be a bit overwhelming. Love can really take up a lot of space in your life, so if you draw the lovers card, it could mean that you are about to fall in love, or you are currently experiencing an intense partnership with someone.

The Ten Of Cups 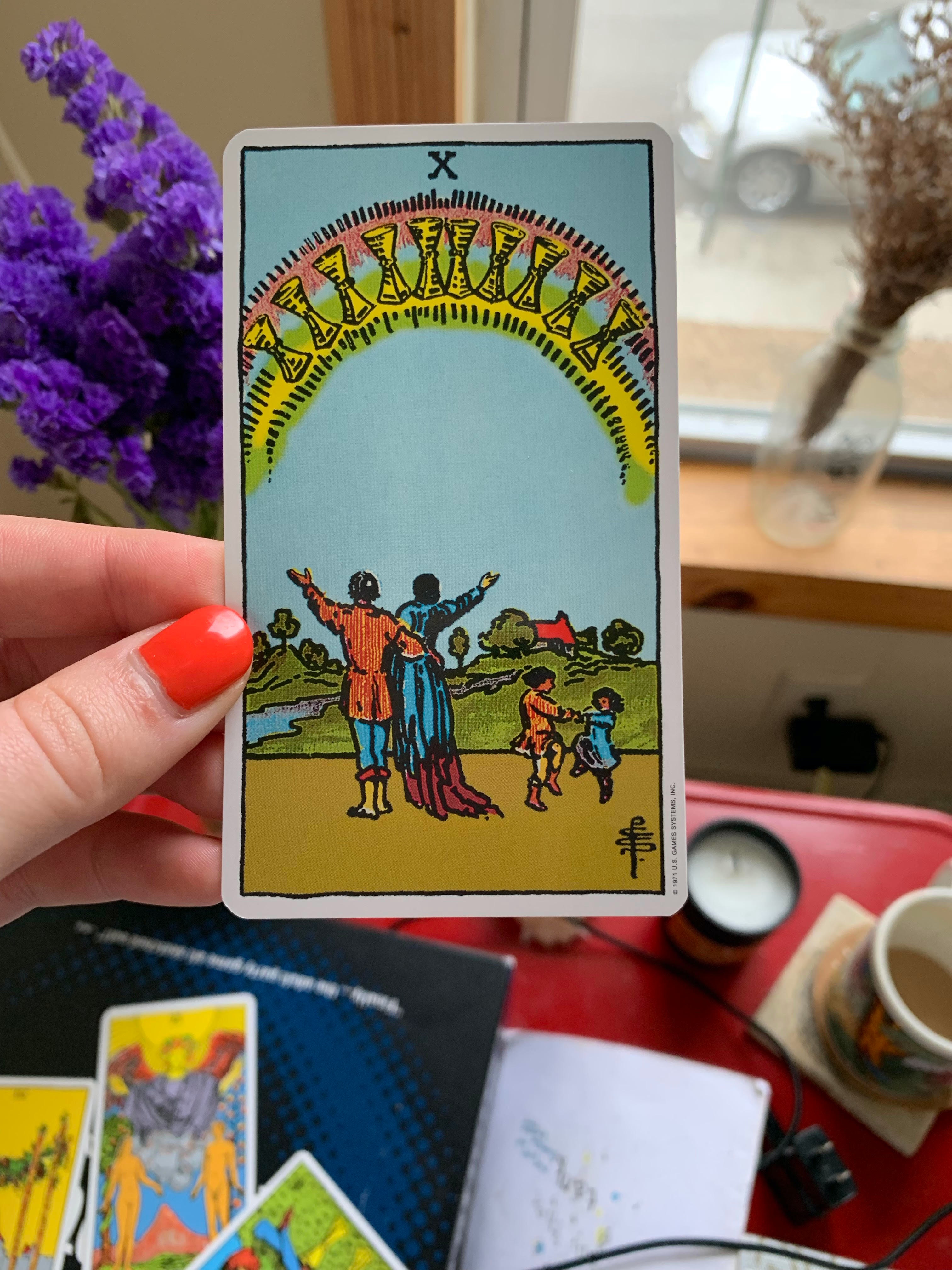 "Ten cups form a rainbow [in this card] — its wonder is being celebrated by a family below," says Jayanti. "A rainbow symbolizes promise and this scene suggests that the people’s hopes and dreams, symbolized by the cups, show the promise of coming true. Children and adults celebrate together, suggesting peaceful coexistence and the possible heal of long-term familial relationships."

This card is always a sigh of relief when I draw it. There’s something so joyous and peaceful about it. It also doesn’t necessarily mean that things are super peachy at the current moment — maybe you and your partner have been through some hard times as of late or have been working through some important things. This card can be a sign that the work will pay off soon soon. It can also be a sign that you and your partner are headed in a good direction. Overall, this card is a really special treat to pull and often reads as a nod to the hard work that you’ve put in to cultivate your shared dreams with each other. "A wand — symbolizing divine inspiration and will and the element of fire, and signifying vitality — is held by a hand reaching out of a could, the world of unseen yet very real forces," says Jayanti. "An extension of your pointing finger, the wand suggests the value of paying attention to what’s going on in front of you right now. It also indicates the importance of being mindful or conscious of your intentions — why you’re thinking, saying, and doing what you are. Each wand in the suit is leading out suggesting that it’s bursting with life."

This card doesn’t automatically seem romantic, but that doesn’t mean it isn’t packed with bright meanings for a romantic partnership. This is a card that can appear to reflect that something new is abound for you and your bae. If you’re single, this could be a fruitful time for you, as something may come along to shake things up. It could also mean that you and your partner are great collaborators and have a healthy creative energy flowing between the two of you.

Overall, regardless of what the tarot cards say, nobody knows your relationship better than you. Hopefully, in your next tarot read ,you see something that fills your own spiritual cup — regardless of the cards that you draw.