As a 10-year-old, Gwen Goldman dreamed of being a bat girl for the New York Yankees, but she was turned down because of her gender. Sixty years later, she finally got her wish.

The Yankees made Goldman, 70, their honorary bat girl on Monday night ahead of their matchup against the Los Angeles Angels. She spent the day with the team, got a full uniform, met players and even got to throw a ceremonial first pitch on the mound. 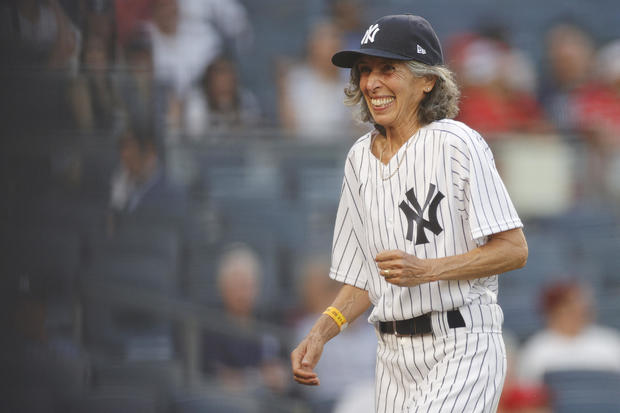 In a news conference after her appearance, she said the experience was “something that I never would have expected.”

“From walking in the front door of the stadium at Gate 2, to coming up to a locker with my name on it that said ‘Gwen Goldman’ and suiting up, then walking out onto the field, it took my breath away,” she said. “It’s obviously taking my words away also. It was a thrill of a lifetime — times a million.”

But the special moment was decades in the making – and it did not start out cheerful. Goldman wrote a letter to then-Yankees general manager Roy Hamey, who replied with one of his own on June 23, 1961.

“While we agree with you that girls are certainly as capable as boys, and no doubt would be an attractive addition on the playing field, I am sure you can understand that it is a game dominated by men. [A] young lady such as yourself would feel out of place in a dugout.”

60 years later, in a new letter to Gwen from the current Yankees GM, Brian Cashman invites her to Yankee Stadium to fulfill her dream. pic.twitter.com/FHZK3SIfe5

After learning about Goldman’s story through her daughter, current general manager Brian Cashman surprised Goldman with a new letter June 23, 2021, saying he wanted to “bring your childhood dream to life.”

“Here at the Yankees, we have championed to break down gender barriers in our industry,” he said. “It is an ongoing commitment rooted in the belief that a woman belongs everywhere a man does, including the dugout.”

“Some dreams take longer than they should to be realized, but a goal attained should not dim with the passage of time,” he added, with an invitation to Monday’s game.

In a video call that included Goldman, Cashman, members of the Yankees organization and star pitcher Gerrit Cole, they surprised Goldman with the letter. She was left speechless.

“Thank you from the bottom of my heart,” she said. “I am overwhelmed … Thank you for doing this for us women. And for moving forward and opening the world up to the populations. Oh my God, I feel like I’m in a dream to tell you the truth.”

60 years later, in a new letter to Gwen from the current Yankees GM, Brian Cashman invites her to Yankee Stadium to fulfill her dream. pic.twitter.com/FHZK3SIfe5