After Foreign Minister Penny Wong met her Chinese counterpart, Wang Yi, on Wednesday, she fronted the media for questions. Her realist approach to diplomacy with China was on full display. “We are very different countries,” she asserted. “We have different views about how our political systems should operate, we have different interests, but we need to seek to manage those differences wisely.”

What is unsaid, of course, is that the rationale for papering over some of those differences, particularly those we find offensive or even dangerous, is the extensive economic interests that unite the two nations. And while, on the global stage, China is the behemoth relative to Australia’s mid-tier ranking, Beijing also has good reason to pull back on its “wolf warrior” diplomacy with Canberra. 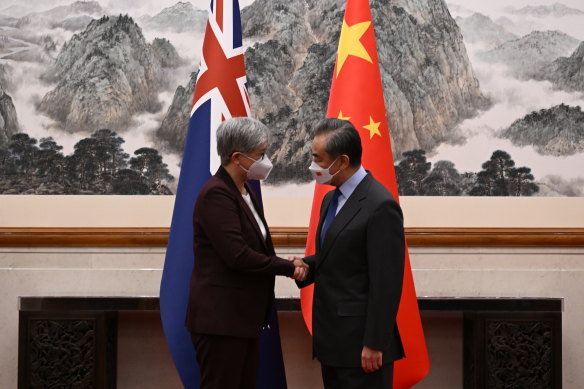 After several decades of seemingly inexorable growth, China’s economy is facing enormous challenges. Its growth has stalled on the back of the only recently abolished zero-COVID policy and President Xi Jinping’s internal crackdown on the burgeoning sectors of big tech, private education and property development. As senior business columnist Stephen Bartholomeusz detailed this week, growth in factory output more than halved in November, from 5 per cent to 2.2 per cent, retail sales plunged 5.9 per cent, auto sales were down 9.9 per cent, and residential property sales fell 28 per cent.

With China on the economic back foot, keeping Australia in the diplomatic sin bin no longer makes sense for the communist state. In exchange for patching up ties, Beijing wants Canberra’s support to join the Comprehensive Trans-Pacific trade agreement, greater access to our natural resources, and for Australia to stop lobbying against China’s interests in the international arena.

For Australia, its highest priorities include Beijing lifting trade sanctions on goods worth $20 billion, and for the release of two Australians detained in China – journalist Cheng Lei and writer Yang Hengjun.

With each side having tangible goals in mind, it is hoped these talks will begin opening the way for a relationship that avoids the more heated rhetoric and ideological disputes that have dominated the past few years. As The Age’s foreign affairs correspondent, Matthew Knott, notes, if successful, this new diplomatic tack would allow the Albanese government to pursue a two-track strategy on China: short-term diplomacy and long-term military deterrence.

For all the high-level meetings and talk of mending ties, there is no avoiding the reality that relations between the two nations could sour at any moment. At its most acute, that could mean confrontation over Taiwan if China were to invade the small island nation. Such a possibility underlines the importance of Australia re-engaging with China. The deeper the ties the communist state has with Western nations such as Australia, the more it has to lose if it were to finally attempt to make good on the One China policy.

The Abbott, Turnbull and Morrison governments took the relationship to a bad place. But they were dealing at the time with a period during which Xi quashed any pretence of Hong Kong having independence from the mainland, aggressively expanded China’s bases in the South China Sea and its attempts to infiltrate Western institutions, and was willing to take a far more aggressive public stance on the global stage.

Xi now appears to be softening his approach internationally, and the Albanese government has proven itself adept at taking advantage of that, and rebuilding a relationship. But Xi is the most assertive Chinese leader we have seen for many decades, and his dominance has only grown domestically after the recent 20th party congress, in which he secured a historic third term as president. These facts ensure that the differences Wong referred to will remain entrenched for many years to come.

Michael Bachelard sends a newsletter to subscribers each week. Sign up to receive his Note from the Editor.