Stacks of correspondence followed the publication last month of Blak, Black, Blackfulla: Language is important, but it can be tricky. Generally, it was civil, engaged and considerate. Not a single message involving a) grooming advice regarding my beard; b) demented myths of a lost pygmy race; or c) any other ignorant rubbish that fuels Australia’s spitting hearth of bigotry. 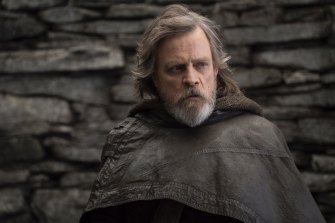 Like a bearded Luke Skywalker, I am offering new hope to those seeking linguistic enlightenment.Credit:AP

The largely cordial reception has prompted my editor to request this sequel, which I’ve shamelessly titled: A New Hope, in the hope that the best instalment of that nine-part epic space opera might lend a little of its Force-mojo to avoid the sophomore slump.

And yes, Aboriginal people invented speculative fiction so don’t @ me with sobs of cultural appropriation. Let’s kick off with the queries from the mailbag.

First Peoples or The Old People

We discussed “First Nations” last time, but it has been brought to my attention that the term “First Peoples” is increasingly coming into use. At least it is here in Victoria. We have the First Peoples’ Assembly of Victoria, of course, which is the entity responsible for establishing how agreement-making or treaties can be negotiated with the state. I have since observed how the term is very deliberatively utilised around that process. 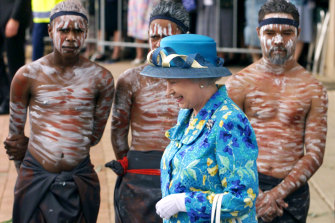 Personally, I’m OK with First Peoples. Andrew Bolt is on record as not being a fan of the term. How do you feel about it?

Another that is emerging into more popular usage is, The Old People. Previously I’ve only really heard this expression used by mob, usually Elders and Traditional Owners (note the capitalisation, thank you), and sites officers, cultural officers, and Indigenous rangers.

Anthropologists and the like appear to have gleaned the reference for their surveys and reports along the way. There’s nothing offensive about Whitefullas rolling with it, but it does have a mildly dissonant ring about it.

You know what? Grab some beads, a hanging crystal and pour me a jar of kombucha. It’s in.

Surely, everybody knows that Blackfullas are deadly by now, right? What you may not realise is that Irish mob use deadly too. Particularly the Dublin mob. Yup, that’s right: Deadly is used in the same positive manner in two separate parts of the world to denote something that is ill, sick, mad, filth, wild and crazy (ie: excellent, fantastic, cool and tremendous). There you go, Daddy-O.

Nobody seems to know who, why, how or where it originated in terms of one influencing the other either, which is deadly unna? Oh, unna pretty much means, “is it not?” 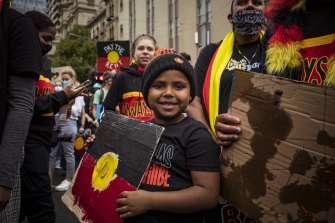 Not all Aboriginal people have an issue with the term, Australia Day. But many others do. When I worked at NITV, the editorial compromise was to refer to the date (and the issue) as, January 26.

Alternatives are Survival Day and of course, Day of Mourning. Whenever given the opportunity, I push for the use of Day of Mourning, which links directly back to the activism of the Aborigines Progressive Association in 1938, when Black leaders like William Ferguson, Pearl Gibbs, Jack Patton and William Cooper demanded basic human rights and protested in the streets against the treatment of Aboriginal peoples. Their legacy and those aspirations persist to this very day.

No. Don’t. It’s creepy. We are not your Indigenous Peoples. Nor do we belong to the individual states or territories, or the Commonwealth, or your particular institution. We do not refer to you as “our white people”, so please desist from the possessive. We ceased being chattel a while back.

One common appeal that emerged from the mailbag after publication of the first article was: “But ‘Aborigine’ is the correct noun”.

My cheeky quip about Whitefullas not being able to use “Aborigine” – henceforth referred to as, “The Noun” – seems to have either confounded or consternated (sometimes both simultaneously) many non-Indigenous readers of a certain vintage.

Dear Penfriends, you are of course grammatically correct: The Noun is the noun and Aboriginal the adjective. Far be it from this little Blak duck to attempt to deny, dismiss, dispossess, disperse, silence or even slightly disappear the quintessence of your learned lexicon, or restrict your most venerable locution. Naturally, you may continue to deploy all the worldly references acquired in your formative years without noticeable consequence.

I would point out, however, that many First Nations peoples (though not all) consider the deployment of The Noun offensive precisely due to the manner in which white people have spoken to and treated Aboriginal people since invasion. As they say, there is that.

I refer to the racist and paternalistic policies put in place to depredate the First Peoples of their sovereignty and basic human rights for the last one 130-odd years – a calendar that goes back a decade or so before 1901, when #ConstitutionalConventions was trending hot around the colonies.

But let’s not get weighed down with the impost of the founding document, eh? Suffice to say, the language and terms of reference perpetuated in the major institutions of the budding Federation, and certainly from 1901 through to the very recent past, are keened instruments of dispossession. I suppose then, the personal existential question is: Do you want to be complicit in that whole crime scene?

I hope that helps.

And that, friends, concludes this repêchage round of Ask An Aborigine. In parting, I leave you with this final useful piece of advice: Don’t be a dooken and get a dori mixed-up with a doori, otherwise you’ll likely need to do more than re-evaluate your personal Reconciliation Action Plan.