AFTER a shock diagnosis as a teenager, Peyton Meave, 27, thought she’d never be able to carry a child.

That was until science – and a generous stranger – stepped in to help. 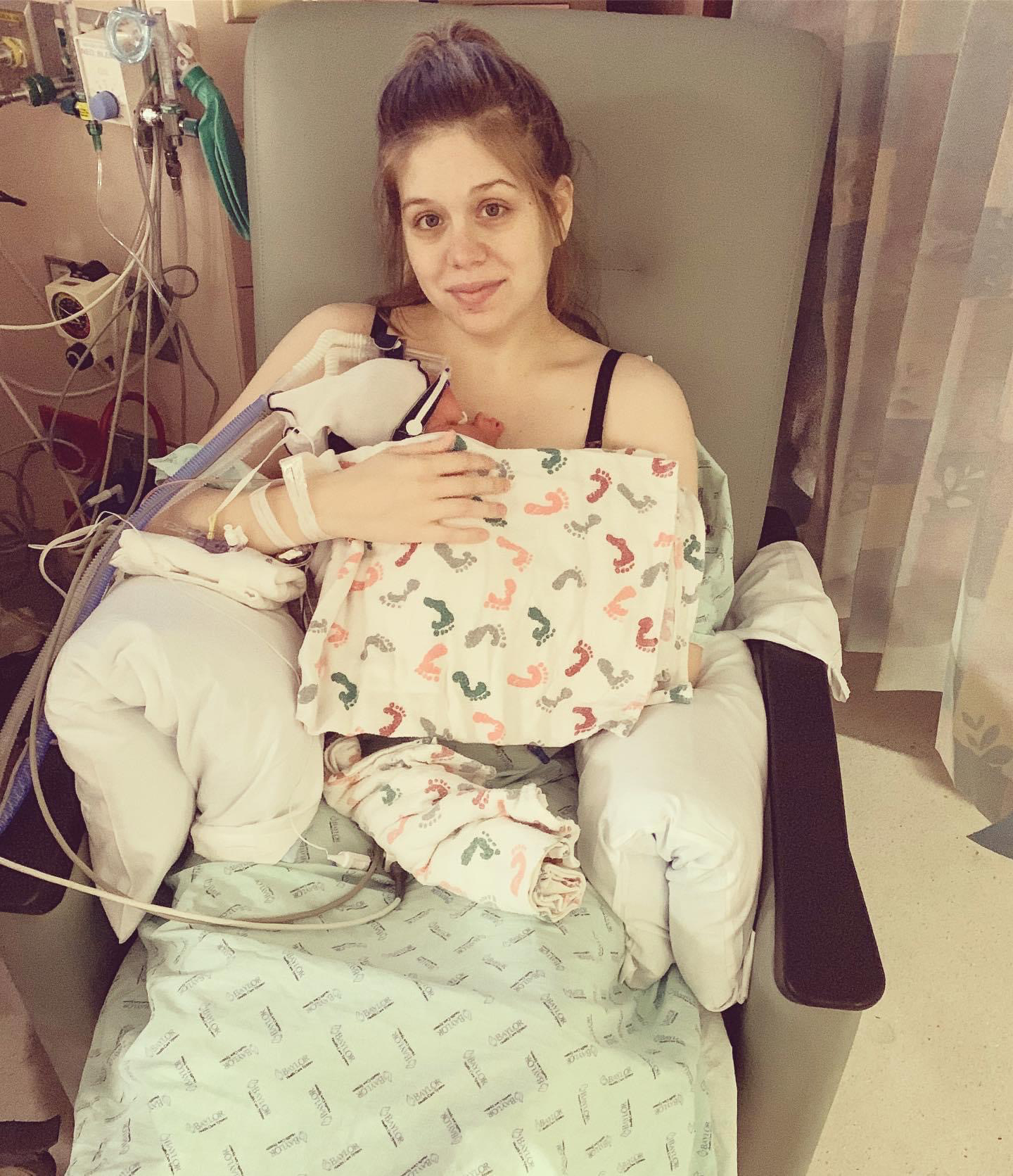 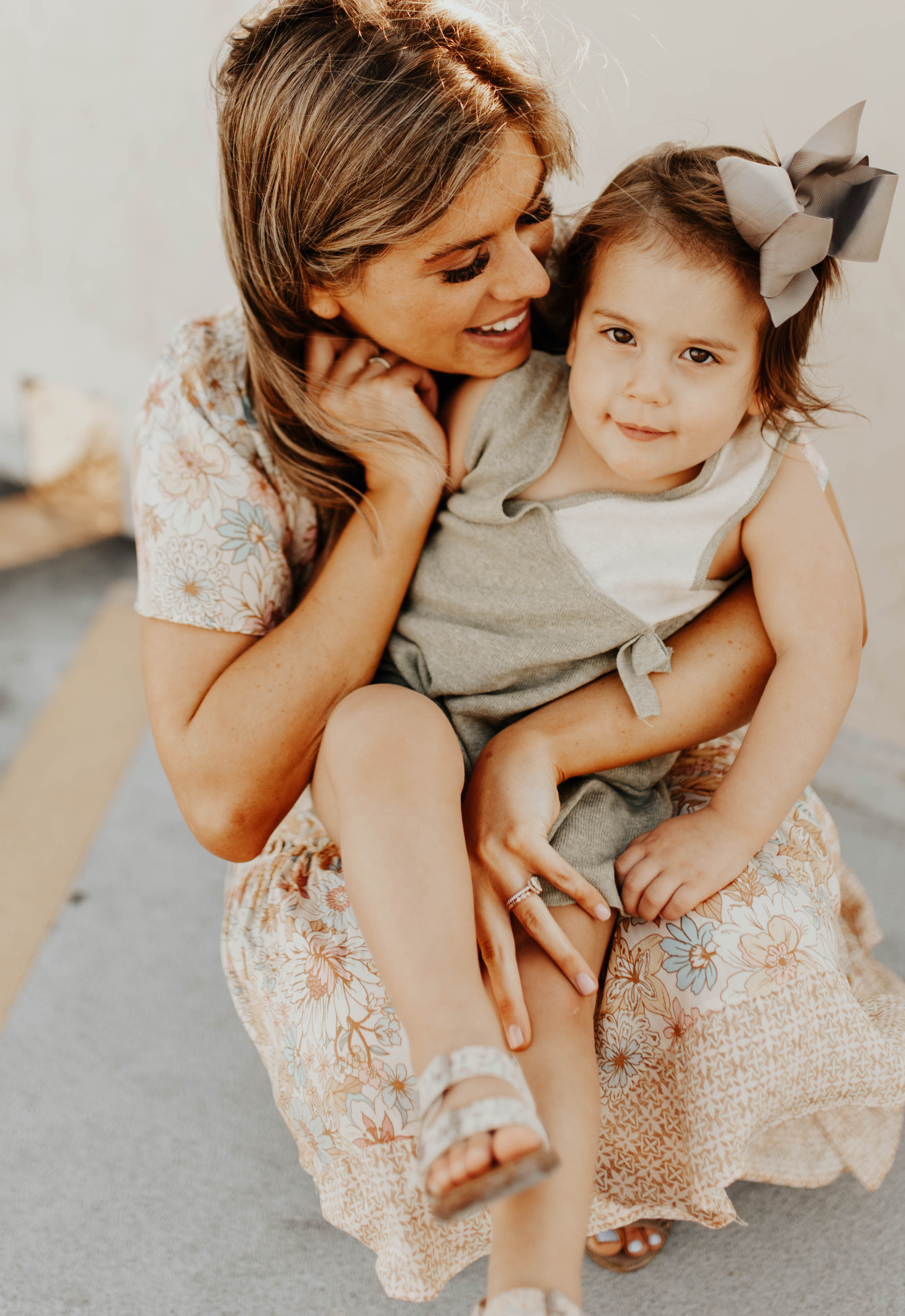 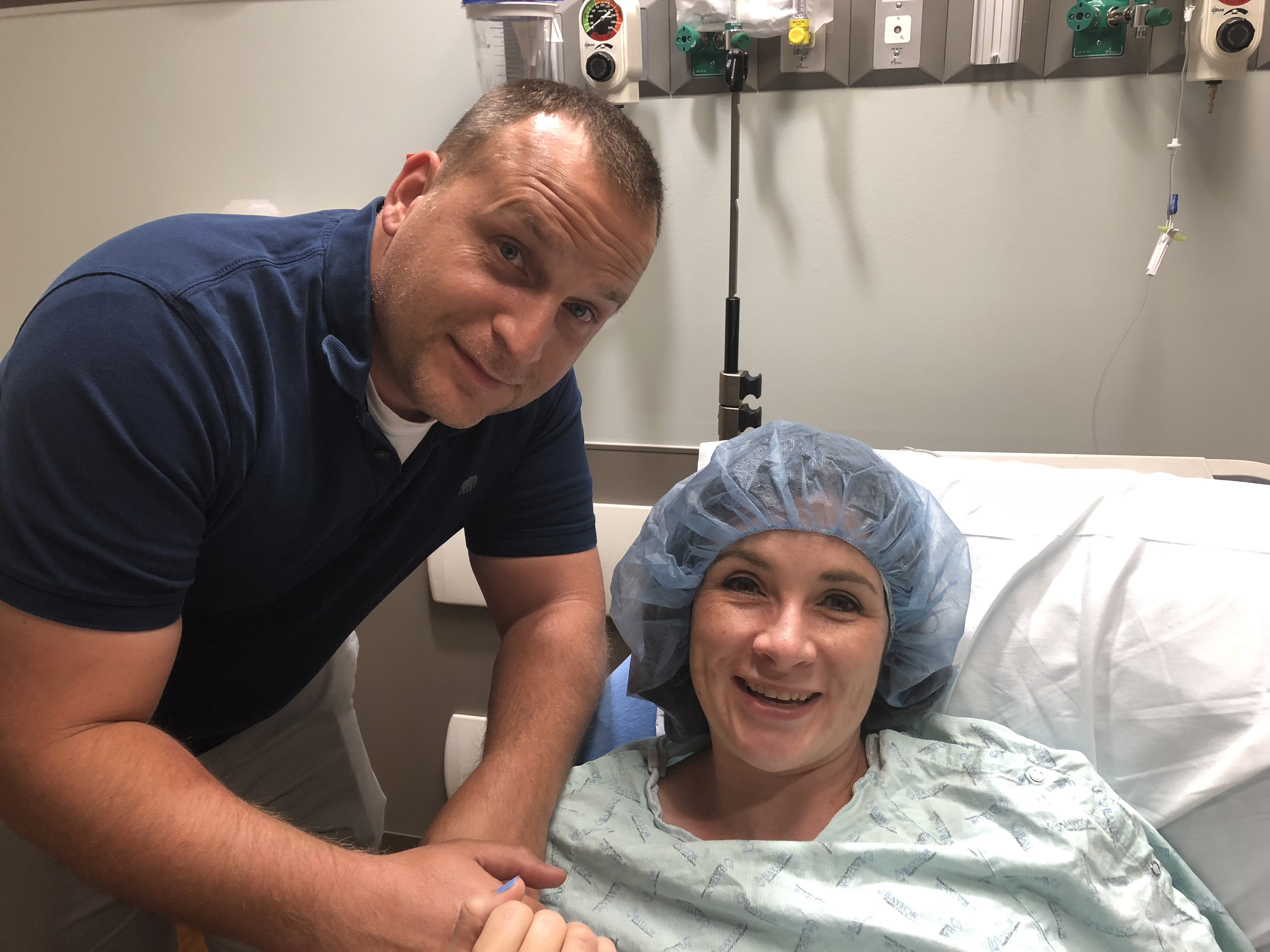 GAZING at my newborn daughter, I could barely believe she was real. After years of anguish, here she was at last.

I didn’t discover the truth about my body until 2009, when I was 15. Concerned that my periods hadn’t started yet, my mum Mendy, now 66, made an appointment with a gynaecologist, and after a raft of tests, I was given the devastating news that I had a condition called MRKH (Mayer Rokitansky Küster Hauser syndrome), which meant I had ovaries but no uterus.

As the doctor explained that I’d never be able to carry a child, Mum held me as we both wept.

It was so much to come to terms with – I didn’t want to be different from the other girls at school in our hometown of Lexington, Oklahoma, USA, so I only confided in a few close friends. Somehow though, word spread, and other kids teased me, which was mortifying.

As the hurtful rumours flew, I shut down, hiding all the emotional pain and humiliation I was feeling. I tried to act like everything was normal, while inside I was in turmoil.

I wasn’t given any medical or psychological support, or spoken to about future fertility options. But my mum was incredible and helped me through it all.

In 2012, when I was 18, I went to the University of Central Oklahoma to study forensic science and criminal justice. Remembering the reaction I’d had from kids at high school, I told nobody at college about my medical condition.

Meanwhile, I continued to struggle emotionally, becoming obsessed with diet and exercise. I wanted to look like the “perfect woman” to compensate for being imperfect inside.

For self-protection, I didn’t date. I figured if I didn’t let a guy get close, I’d never have to reveal the truth and face the rejection I was sure would follow.

Then, in April 2014 when I was 20, I met Adam in a bar and we just clicked. He spoke about his daughter Addison, then two, who he shared with his ex, and his relaxed approach to life made me feel so comfortable.

Three months later, he said he loved me, and I panicked. In tears I blurted out: “I can’t have children.” His immediate, loving acceptance made me sure he was the real deal.

I thought about looking into adoption or surrogacy down the line, but then, in April 2016, I read online that a uterus transplant trial was happening in Dallas, at Baylor University Medical Center, five hours’ drive away.

Full of hope, I got in touch, and they asked me to come for a screening with a view to taking part.

But when I thought things through, especially the fact that Adam and I had been dating less than two years and I was still in college, I made the heartbreaking decision not to go, as it just didn’t feel like the right time. But I stayed on the trial centre’s list.

Then Adam proposed in February 2017, and we set a wedding date for September. In April, I had an email from Baylor saying that if I was still interested, they had a spot on the trial for after our wedding. By then I had a steady job working for social services, so with Adam’s support, I replied yes and cried with happiness.

'THE IDEA WAS SURREAL'

In May 2017, I went through a physical and psychological screening. I was told about the risks to my health, both from major surgery and the immunosuppressants I’d need to take to stop my body rejecting the uterus, which would be donated by a living, anonymous donor.

And I was informed of the very real possibility that I’d go through it all and still not have a baby.

They also explained that the transplant was only temporary – due to the risks of taking immunosuppressants long-term, the womb would be removed at some point.

After Adam and I had got married, I underwent two rounds of IVF using my eggs and Adam’s sperm, and we ended up with seven embryos, which were frozen.

Then in March 2018 came the call that a donor uterus had been found and my surgery was scheduled for May. In the final few weeks before the operation, I had moments of thinking: “Have I lost my mind?” The prospect of the huge op and having someone else’s uterus inside me was surreal.

My anonymous donor was always on my mind. How could someone be so caring and generous to a complete stranger? The fact that she was preparing for this huge operation just for me was overwhelming.

We’d been encouraged to write each other a letter, so I shared my story and tried to express how incredibly grateful I was.

Waking up from the seven-hour operation, I was overjoyed to hear that it had been successful. As I recovered, I was given the letter from my donor, and it was so powerful.

She said that she considered me a mother already because mothers fight for their children, and explained that she’d wanted to help someone else experience motherhood.

My anonymous donor was always on my mind. How could someone be so caring and generous to a complete stranger?

Three months later, aged 24, I had my first period, which was mind-blowing. In December 2018, one of our embryos was transferred, and just five days later I sneakily took a pregnancy test while Adam was at work.

Seeing it turn positive, I was so happy, but it didn’t feel real until my six-week scan, when I saw the heartbeat in the uterus of a stranger.

I waited until I was 25 weeks pregnant to write to my donor to let her know. I had a difficult pregnancy – there were a lot of medical complications, including an incompetent cervix, where weak cervical tissue can lead to a premature birth – and I wanted to feel sure everything was going to be OK before I told her.

I was delighted when she responded and also told me about all her own pregnancies and births.

Our daughter Emersyn was born by C-section on June 21, 2019, 10 weeks early, weighing just 3lb. The doctors had said she didn’t look healthy and needed to be delivered, and I only had the briefest of glimpses before she was rushed to the NICU.

It was an agonising 10-hour wait until I could hold her. When I finally had her in my arms, the feeling of love was indescribable.

In January 2020, I had to have surgery to have my uterus removed, which was very sad. It was hard to feel “fixed”, only to end up back where I started, but the fact I was a mum at last made it easier.

After the op, doctors told me I could meet my donor if both sides agreed. As soon as I saw Elaine, a mum of seven from Dallas, and introduced her to Emersyn, I burst into tears. She was as kind and compassionate as I’d imagined.

We’d planned to meet again, and for Emersyn to meet Elaine’s children, but then the pandemic hit, so that was put on hold, but we’ve stayed in touch.

Adam and I still have six embryos and would love to do surrogacy in the future, but it is very expensive, so we are saving and hoping! Whatever happens, Elaine and I will always have a special bond.

Emersyn will grow up knowing the part Elaine played in her life, and the importance of always chasing her dreams.

It was the perfect Mother’s Day in 2018, surrounded by my seven children and loving husband. But I had another woman in mind, someone whose name and face were a mystery to me.

The next day I’d be giving up my uterus to her in the hope that she too could have children.

I met Anthony in June 2001, when I was 18 and we were both in the navy. We got engaged two months later, and married in April 2002. Our daughter Grace was born in October 2003 and our family grew from there.

I went from not knowing anyone with fertility issues, to becoming a midwife and meeting many.

Which is why, when a colleague showed me an article about uterus donation in December 2017, it struck such a deep chord. By then, our own family was complete, but here was an incredible way to help someone else.

I was on holiday with Anthony and my sisters in February 2018 when I told them what I’d signed up for. They were all intrigued and supportive – Anthony is used to me having an idea and running with it. Plus, it was my uterus!

It was exciting to do the two-day screening. As well as blood tests, they took an extensive health history and various scans. I also had to have psychological screening to ensure I wanted no more children myself, and that I understood the risks of major surgery, as well as the fact it would trigger the menopause.

With the recipient being anonymous, I was aware I might never find out who she was. But from the moment in April 2018 that I heard I’d been matched, I thought about her and her hopes and dreams.

I chose to close the door of my own fertility and to give that choice to someone else. It’s been truly empowering.

The operation took eight and a half hours and after waking up, I immediately asked about her. The relief when I heard that it had been successful was incredible, and reading her letter expressing her thanks felt overwhelming.

Five days later, I was discharged, with a scar from my belly button to pubic bone. It was painful for several weeks and my hormones swung around, but I began taking HRT, which helped.

In May 2019, a year after the surgery, an email arrived from the nurse, forwarding a message from Peyton telling me she was pregnant – I was so thrilled for her.

To then receive her message that Emersyn had been born, and to see a photo of this beautiful baby girl, brought me pure happiness. I knew that she and my children weren’t related, but they had shared the same “house”, albeit within two different women.

Meeting Peyton in February last year and holding Emersyn felt like a dream – to finally sit together and talk was such a special moment. I can’t wait for us to meet again.

Women’s choice is so important to me. By doing this, I chose to close the door of my own fertility and to give that choice to someone else. It’s been truly empowering. 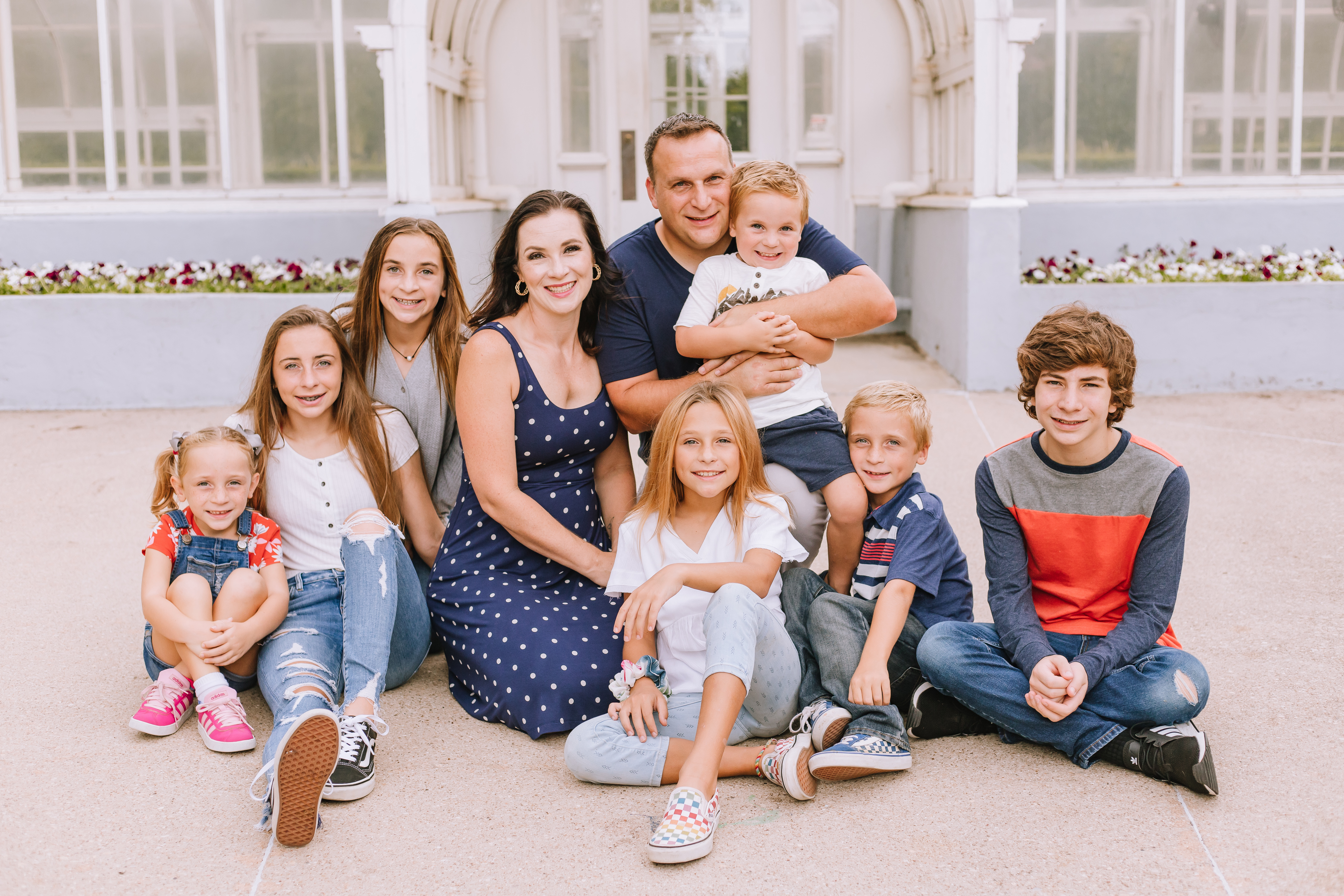 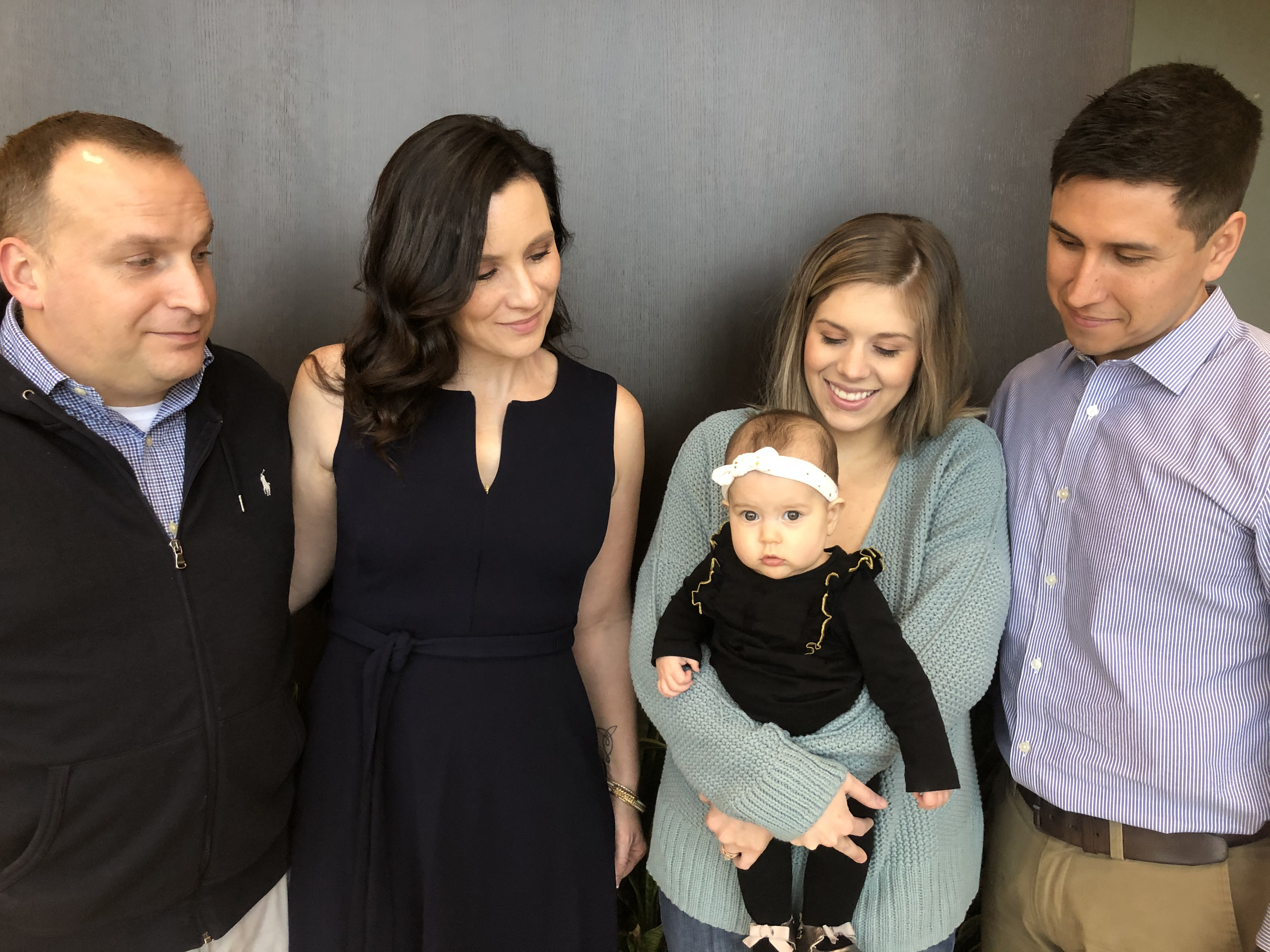