For Perth, the grand final entertainment was all about hometown heroes. But on the locked-down east coast, it was the sight of Mike Brady wandering the deserted streets of Melbourne and singing alone in the MCG that really tugged at the heartstrings.

For the second year in a row, circumstances both forced and allowed parochialism a free hand in the booking office. And like Brisbane’s line-up last year, Perth’s artists seized the opportunity with both hands. 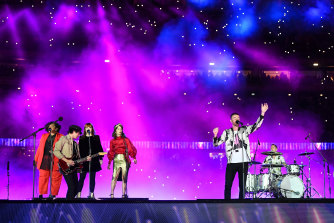 Birds of Tokyo got the glory gig, the halftime show. With dusk setting in the western capital, the stadium lights were dimmed, and onto a darkened stage stepped Ian Kenny and band to perform Lanterns, bolstered by the West Australian Symphony Orchestra. Next they did Silverchair’s Straight Lines, while their third and final song – with its refrain of “When you’re standing tall, you’re unbreakable” – was dedicated to frontline workers in the pandemic. And then, in an explosion of fireworks, they were gone.

Pre-game, there was poetry in the choice of Richard Walley to lead the Welcome to Country; the indigenous artist is credited as the man who delivered the first modern version of this ancient traditional greeting at the Perth Festival in 1976. 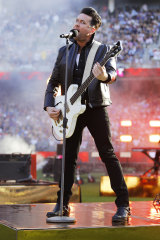 That was followed by a tradition almost as old – Mike Brady singing Up There Cazaly on Grand Final Day. Via video, he wandered the deserted streets of Melbourne, then headed into the empty ’G. It was a shame this was a pre-recorded (and mimed) performance, but it’s hard to imagine he could have done it live without choking up. Certainly for those watching at home, the pathos of those images was almost unbearable.

Back in Perth, the theme of the show was revealed: Aussie anthems. What exactly that meant wasn’t immediately clear as Melbourne’s D2Drumline, a massed drumming ensemble who specialise in this kind of big stadium event, set the groove. But then the drone pulled back to reveal Abbe May alone atop the stadium, playing the lead guitar lick from AC/DC’s Thunderstruck, and all was revealed. It was a fresh spin on the term “stadium rock”, and it made for an impressive start.

Bolstered by brass, the drums provided a through-line to the rest of the set, accompanying indigenous rapper Baker Boy on a cover of Kylie Minogue’s Can’t Get You Outta My Head, which quickly morphed into his own hit Meditjin. It kept going as John Butler played Ocean, which in turn morphed into Icehouse’s Great Southern Land, complete with a verse in Nyoongar from indigenous singer Gina Williams.

Eskimo Joe were next with their own Black Fingernails, Red Wine, from which they barrelled straight into Perth-born INXS’s Kick. Then it was over to Colin Hay – a Scotsman with homes in St Kilda and Los Angeles, but writer of an anthem so all-Australian that wherever he lays his Akubra, that’s his home. He was on a beach 10,000 kilometres away, and his performance was presumably also pre-recorded, but thanks to the miracle of technology he was joined live by the musicians back in Optus Stadium on a slowed-down version of – what else? – Down Under. 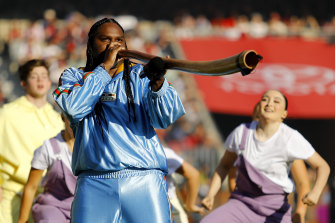 It all went at a clip, without a hitch, and with barely a beat between songs – though how much of it was actually live was hard to tell, in part because of the slight lag in the broadcast and in part because it was hard to pick where backing tracks stopped and performance began.

Finally, just before the bounce, came Amy Manford on national anthem duties. Had things been different, she wouldn’t even have been in Perth – she’d have been in Sydney, performing as Christine in The Phantom of the Opera.

Then again, had things been different none of this would have been happening in Perth at all. In music as in footy as in major events, it’s all about taking your chances when they come.