Veteran ABC journalist Sarah Ferguson will move to Washington early next year as a "special reporter", arriving just as the US responds to the inauguration of its new, or returning, President.

"The drama of the US story is compelling," said Ferguson in a statement via the ABC. "It's the other side of the coin in the great superpower stand-off. And I'll be reporting in the aftermath of an era-defining election." 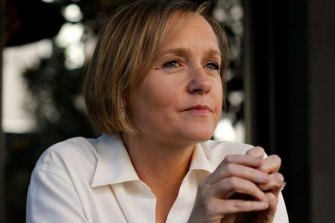 Sarah Ferguson will head to Washington to take up a “special in-depth reporting role” for the ABC. Credit:Steven Siewert

The flip side of the coin to which she refers is China, where Ferguson was meant to be right now.

Her appointment as China bureau chief was announced in February 2019, and was planned for November last year, following the completion of Revelation, her three-part documentary series on sexual abuse in the Catholic Church.

But the Gold Walkley Award-winning journalist's move has not eventuated because she is yet to receive visa approval from the Chinese government.

Despite Australian journalists Bill Birtles (ABC) and Mike Smith (Australian Financial Review) fleeing the country in September after Chinese state security officers told them they were persons of interest in a national security case, both Ferguson and the ABC remain hopeful that the China posting will happen. 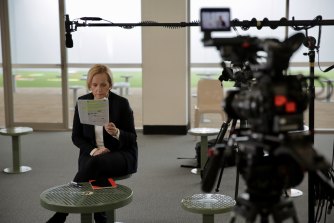 Sarah Ferguson preparing for an interview for her Revelation series. Credit:ABC

The Washington move is a short-term appointment, expected to be for six months. Ferguson's partner Tony Jones, former host of Q&A and co-writer with her of Revelations, will also relocate to the US, but not as a representative of the ABC.

With no ABC reporters left stationed in China, the broadcaster has also announced it will open a temporary bureau in Seoul, "to expand reporting in North Asia".

"We're looking at how we can most effectively deploy our resources to provide the best world coverage for audiences," said ABC director of news Gaven Morris.

"On-the-ground reporting for Australians through Australian eyes helps improve our understanding of international events and how they affect our nation and our lives."