Standing inside the parabolic cooling tower of a defunct power station, peering up at the clouds and listening to precise echoes of even whispered conversations, is both awesome and peculiar.

“People have said, ‘even if you didn’t believe in God, you’d think he’d have been born here or had lived here’,” laughs Neil Schembri, one of the new owners of the Wallerawang power plant outside Lithgow that he wants to convert into a zone taking in industry, housing and even entertainment. 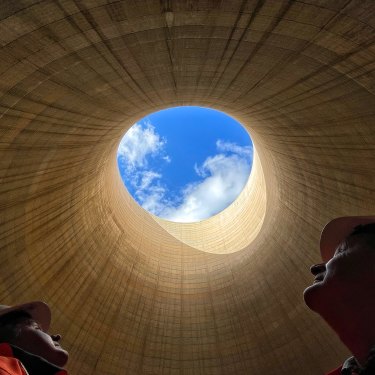 Originally earmarked for demolition, the 125 metre-high tower with a volume of about half a million cubic metres will now be retained even if Mr Schembri and colleagues at his firm Greenspot aren’t yet sure what to do with it.

The pellucid acoustics hint at movie sets or a music venue, while its shape invites ideas of rock-climbing on the exterior shell. Either way, it could be a landmark attraction for a town battling to cope with the loss of 220 jobs when Wallerawang closed in 2014 and more cuts as local coal mining withers.

“What is very important to this community is honouring the legacy of electricity generation, and we believe this project will do that,” says Brett Hawkins, Greenspot’s chief executive, as he rolled out a map of the 450-hectare site at his office nearby.

“But we’re also about ushering in new industries,” he said. “This could be a blueprint of sorts for other areas”. 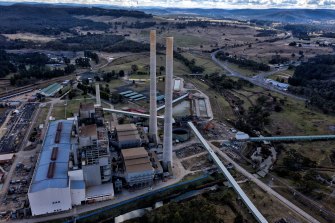 Known as “Wang”, the 1000-megawatt coal-fired power station was commissioned in 1957. Demolition teams will detonate the two smokestacks later this year as the site takes on new roles. Credit:Nick Moir

Mr Schembri, a racer of heritage cars and former competitor at Bathurst’s Mount Panorama, said the experience his businesses have had dealing with contaminated materials such as coal ash will be handy.

“We’re used to taking the problem sites and making something good out of them,” Mr Schembri, 64, said. “This is certainly one of those.”

Greenspot, a venture forged by low-profile companies Borg and Bettergrow, snapped up Wallerawang from EnergyAustralia in 2020 for what Mr Hawkins described as “a significant investment”. Hong Kong-based EnergyAustralia had bought the plant in 2013 along with the newer 1400MW Mt Piper power station nearby for $160 million. 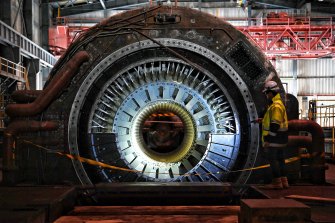 A demolition worker examines a Siemens turbine within the main power plant at Wallerawang.Credit:Nick Moir

The venture will take advantage of the adjacent rail line and highways, while the lake and its public campgrounds offer recreational and residential options. The first project, though, could be luring investors to build a 500MW Big Battery on the site to take advantage of the power station’s connection to the grid.

“It’s going on a site which has got a long history of generation use,” said Sam Magee, head of business development for Greenspot and a former EnergyAustralia executive.

In a nod to the past, the proposed battery would be dubbed Wallerawang 9, succeeding the plant’s final units 7 and 8. While Greenspot is yet to settle on a battery or supplier, it is confident construction can start by the first quarter of next year with a price tag of “sub-half a billion dollars”. 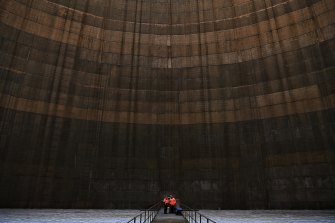 At about half a million cubic metres in size and precisely engineered, the cooling tower makes for a unique experience as an echo chamber of monstrous dimensions.Credit:Nick Moir

”It’s really critical to facilitate the greater introduction of renewables into the system,” Mr Magee said, noting the proximity to the Central-West Orana Renewable Energy Zone expected to foster a flurry of wind and solar projects.

“How brash is that?” Craig Butler, general manager of Lithgow Council, said of the group’s ambition. “It’s not going to be easy. It’ll be a challenge all the way.”

Still, Mr Butler said Greenspot is “genuine about engagement of the community” ahead a public event planned for July to detail their plans.

“Repurposing Wallerawang can be a model for repurposing our coal mines,” he said. “We’ve got to get our skates on. [The transition away from fossil fuels] is racing up on us.” 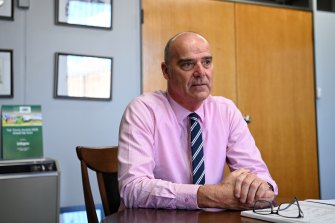 Lithgow Council General Manager Craig Butler says the community is keen to see what Greenspot can do to repurpose Wallerawang.Credit:Nick Moir

That race includes rivals of Greenspot. France’s Neoen, one of the most active energy developers in Australia, is also eyeing a 500MW battery nearby.

“We are actively developing it for the other side of the road,” Louis de Sambucy, Neoen Australia’s managing director, said. “It’s a good connection point and a very strong part of the network.”

More permits are needed but Neoen’s battery could be online by the end of 2023. Still, the network “could accommodate both batteries”, he said.

Tania Aussel, owner of the popular Tin Shed Cafe, said Lithgow “is going through a dynamic change and this is just another step”.

“I know the developers are open for suggestions on ideas and I’d love more artistic services to bring in tourism,” she said.

Many visitors use her cafe as a meeting point before heading off to explore the Gardens of Stone and other spectacular sandstone valleys near Lithgow.

“Anything is good for this town. For 20 years we’ve seen everything shut down,” said Stewart Charlton, a former local surveyor in the mines now out of work. “No one normally wants to spend money in Lithgow, so this is a nice change.”

Looking up from inside the cooling tower of the now defunct Wallerawang power plant outside Lithgow.Credit:Nick Moir

State politicians are also on board. Paul Toole, the local Nationals MP, said he was “excited about plans to transform the old Wallerawang power station”, and the creation of potentially hundreds of jobs.

“Many Lithgow locals have a strong connection with the old power plant, so seeing such a great outcome on this site is a real win for our region,” he said.

Likewise, Energy and Environment Minister Matt Kean said he supported “any proposal to the NSW energy grid that provides for reliable and cheap electricity for the people of NSW”.

“It is encouraging to see private companies like Greenspot willing to invest in NSW’s energy future,” Mr Kean said. 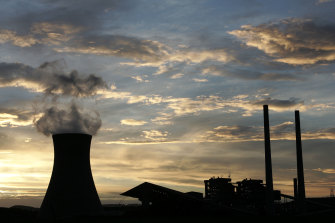 Wallerawang power station operated for about 57 years. The NSW government sold the plant to EnergyAustralia in 2013 and they shut it down a year later. Credit:Rick Stevens

Labor’s energy spokesman Adam Searle said “we need to maximise the imaginative reuse of our existing energy infrastructure” to save time and money. “It would be crazy not to see if we can repurpose Wallerawang.“

For Mr Schembri, the region’s rich history is one cause for optimism. Meaning “place near wood or water” or “plenty of water” to the Wiradjuri traditional owners, Wallerawang also drew famed British naturalist Charles Darwin during his round-the-world voyage on the HMS Beagle.

As Sydney University scientist historian Frank Nicholas noted in The Conversation, it was near Wallerawang in 1836 that Darwin puzzled over how a rat kangaroo and a platypus occupied similar ecological niches to the rabbit and the water rat in the northern hemisphere and yet were so different.

“Surely two distinct Creators must have been [at] work,” Darwin wrote in his diary, his first but not last such musing of that kind.

Mr Schembri detects a parallel with the area’s changing fortunes over the years.

“It’s all about evolution,” he said.

Most Viewed in Environment