In the 12 months to January this year, Artspace in Sydney created an online platform for artists across Asia to respond to various political, environmental and social issues via weekly acts of artistic ‘‘disobedience’’. The resulting publication, 52 Artists 52 Actions: Small Acts of Disobedience, is published on July 1. In this edited extract and accompanying images, artist Echo Morgan comments on her own place in contemporary China.

BIOGRAPHY
Echo Morgan (Xie Rong) appropriates stereotypes of ‘‘Chineseness’’, and tropes of Chinoiserie and femininity in order to subvert them. Utilising her own body as material, she often works with text written on her skin using red lipstick, black Chinese ink, white ‘‘ink’’ made from jasmine tea, or her own breast milk after giving birth to her second child.
She mines her own experiences of childhood, family, marriage and motherhood – and those of her female ancestors – juxtaposing English narration with Chinese traditional song to play with her complex hybrid identity. Her work explores the territory of translation: between two languages, between gesture and stillness, between her Chinese past and English present, between performance and image. 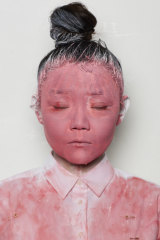 STATEMENT
China, pronounced with a Chinese Pinyin (spell sound) such as ‘‘Chai Na’’, means ‘‘demolition that’’. If my parents’ childhood is remembered in hunger and cultural revolution, mine is with the chaotic background of city development. Through video, installation and live performance, I invite you to enter a personal journey of being inside this era of ‘‘demolition that’’.
All I ever wanted was a happy, loving family.
The photograph that was the prized centrepiece of my childhood album, showing me at age five with my smiling mother and father in front of the arched Paifang family monument at Chengdu’s Two Kings Temple, seems to say that is what I had.
But before I was even born, my parents’ marriage was layers of fantasy, and what the image really shows is one of a handful of moments in my childhood when our exploded family would unite to ‘‘save face’’ for the world.
Thirty-five years later, Echo Morgan, as I renamed myself, was ready to leave the new life I have built as an artist living in London to return to Chengdu. There I set about reclaiming my flawed family, untangling the roots that gave me a confused and conflicted start in life and, by seeking to integrate the many powerful stories I connect across the radical social, political and physical upheavals of China’s recent history, to bring it a new coherence. 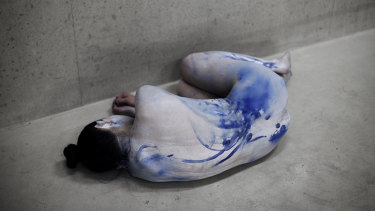 Echo Morgan, ‘Be the inside of the Vase and Break the Vase’, 2012, performance documentation, Dyson Gallery, London, courtesy the artist. Credit:Jamie Baker 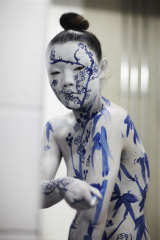 Echo Morgan, ‘Be the inside of the Vase and Break the Vase’, 2012, performance documentation, Dyson Gallery, London, courtesy the artist. Credit:Jamie Baker

Before my live performances Be the inside of the Vase and Break the Vase, I performed for the camera, my body painted with a blue-and-white pattern of bamboo and cherry blossom derived from porcelain. A branch of blossom trailed across my face, covering my mouth, silencing me. My father always said, ‘‘Women are like a beautiful vase – decorative, expensive but empty inside’’. My mother, in contrast, told me not to be like the surface of a pretty, empty vessel, but instead to be like the inside: ‘‘Be the quality!’’ The first performance, Be the inside of the Vase, revealed my uneasy childhood and difficult relationship with my father. I was still and silent while my voice revealed the narrative using a pre-recorded audiotape. In the second performance the story moved towards my relationship with my mother.
I stood inside an enormous vessel made of paper and bamboo, inviting the audience to throw water-filled balloons at me in order to ‘‘break the vase’’.
I was sent away at the age of four, after my parents’ divorce, to board at a much-hated, strict communist kindergarten. There I was shaped into a ‘‘xiao hong hua’’, a little red flower, obedient and pliant. This early communist education and China’s economic boom is deeply embodied in my roots. They still strongly control my thoughts and behaviour. 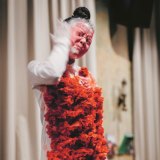 In the summer of 1989, I lived in my ‘‘commie red’’ nursery for one whole month. The teacher gave us one red paper flower each day as an emotional comfort for not seeing our parents. Our teacher said that we were at war, that a counter-revolutionary riot had attacked our country, burned down the shopping malls and set fires on the streets, so there was no transportation across the city. It was too dangerous for our parents to come to pick us up. I was only six years old; my head filled with fear, but the national pride grew proudly strong. One month later my mum and I decorated our home with a wall of 30 red paper flowers to celebrate the win of our people’s army and for my one month of lonely and fearful suffering. Years later I watched old footage of that day in London and realised the so-called ‘‘enemy’’ were unarmed students. 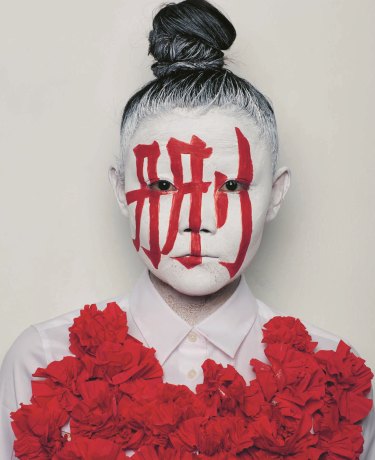 Echo Morgan on the cover of 52 Artists 52 Actions.

This 3000-year-old Chinese character (painted onto her face, above), originally from oracle bone script, means delete or remove.
It is constructed of ‘‘knife’’ and ‘‘book scroll’’. It has become the most used and powerful word in Chinese social media. Words and images are strictly censored by the government. Sensitive articles and photos are removed quicker than you can save or repost them. During this 15-minute performance, I slapped myself until the word disappeared and the red flowers fell off. In China, red is associated with the element of fire, which is traditionally used to raze fields in preparation for fresh planting. White is associated with metal, which is the material being used to build the new China. White is the colour of mourning.
52 Artists 52 Actions: Small Acts of Disobedience, co-published by Artspace Sydney and Thames & Hudson Australia, $70, available July 1.

Echo Morgan on the cover of 52 Artists 52 Actions.