Looks like the "Thank U, Next" singer is saying just that to the matching tattoo that she got with ex-fiance Pete Davidson as Ariana Grande’s new finger tattoo is apparently a coverup.

According to Refinery 29, Grande took to her Instagram stories on Wednesday, June 19 to post a video showing off the new ink on her hand where she tagged her tattoo artists Mira Mariah along with the text "My hands make me so happy."

In the video you can see a new tat of an ivy vine wrapped around the pointer finger on her right hand. But among Grande’s collection of 40+ small tattoos, this new ivy tattoo has some significance attached to it as Refinery 29 believes it’s covering up a Harry Potter-themed tattoo that the singer got when she was still engaged to Pete Davidson.

At the time, the tattoo was a symbol of the couple’s love language, but now that both of the stars have moved on,and Pete has also covered up their matching ink, it looks like Grande felt that it was time to change up her tattoo too.

The tattoo that she is apparently covering up was a tattoo of the text "9 3/4," a Harry Potter reference that stands for the number of the train platform used to get to Hogwarts School of Witchcraft and Wizardry. 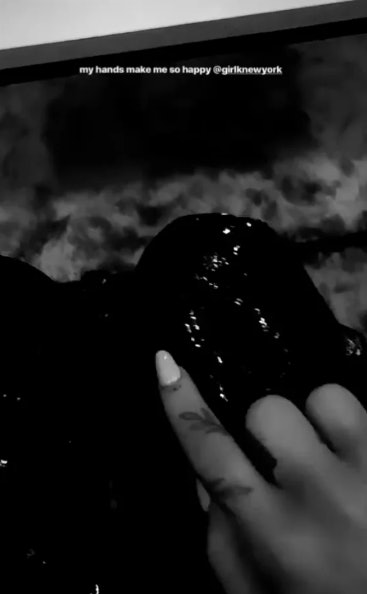 If Grande’s new ink is serving as a cover-up tattoo, then it’s definitely not the first tattoo that she’s covered up that was once a symbol of their past relationship. Back in December, the singer covered up her "8418" tattoo with another tattoo that now serves as a tribute to her late ex-boyfriend Mac Miller.

Grande got the ‘8418" tattoo on her left foot when she was still engaged to Davidson as it was a tribute to his late father. Davidon’s dad was a fireman who passed away during the terrorist attacks on September 11, 2001 in New York City, and "8418" was his FDNY badge number.

post run thrus, 3 am with @girlknewyork 🙂 not a cover up just evolvin ? also, our show opens tomorrow. i love u and i’m so grateful. see u soon.

To replace that tattoo, Grande got "Myron" across the top of her left foot. Myron is the name of Mac Miller’s dog that now lives with Grande. Miller adopted Myron back in January 2017 when the couple was still together and you can now spot him every now and then on Grande’s Instagram stories. So while the tattoo poses as a permanent symbol of her love for her dog, it’s also a touching tribute to the late rapper as well.

While Grande’s new tattoo could very well just be a new addition that she wanted to add to her ever-growing tattoo collection, I can’t help but notice that it is placed over top of one of the tattoos that she got during her relationship with Davidson. And after all, one of the lines in Grande’s song "Tattoed Heart" is "Just as long as I’m the name on your tattooed heart," and now that their relationship is over, she could feel like it’s time to cover up that tattoo with new tattoos and their new meanings.