Home owners are set to see their mortgage repayments increase after the cash rate rose for the first time since 2010.

The Reserve Bank yesterday lifted the official interest rate by 0.25 percentage points, taking it from its record low of 0.1 per cent to 0.35 per cent less than three weeks out from a federal election focused on cost-of-living pressures.

If the banks pass on the hike in full, the average borrower with a $500,000 loan and 25 years remaining will see repayments rise by $65 a month, up to $130 for someone with a $1 million loan, according to RateCity.com.au.

The average loan for an owner-occupier in NSW is $760,428, February figures from the Australian Bureau of Statistics show.

Among those who will see higher mortgage repayments are Wahroonga homeowners Daniel Lewis and Georgia Barnes, who purchased their first home – a two-bedroom unit – early last year.

Lewis, a project manager, and Barnes, a teacher, have been making the minimum repayments on their variable loan and were waiting hopefully for wage increases before looking to make additional repayments. 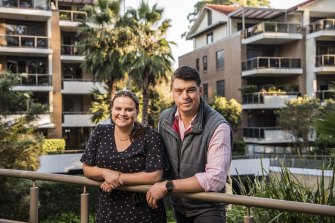 Georgia Barnes and Daniel Lewis said they were conservative in their approach to borrowing but would need to cut back on discretionary spending if rates rise further in the coming months and years. Credit:Steven Siewert

The couple was not that worried by rising interest rates, as they had a savings buffer and factored in higher repayments when they set their budget.

“We didn’t want to be too exposed if [our repayments] did go up, we were conservative in our approach and didn’t borrow more than we had too,” Lewis said, adding they had been set on reaching a 20 per cent deposit to avoid paying lenders mortgage insurance.

However, they know that they, like many, will have to cut back their spending on dining out and other discretionary expenses if rates continue to rise in the coming months and years.

“It’s the first thing that goes when you have to tighten the belt … we’d certainly be looking to peel back a bit of the discretionary spending, it’s unfortunate, but that’s the way it is.”

Their mortgage broker Anthony Landahl, managing director of Equilibria Finance, said while rising rates would be challenging for some borrowers, the majority would be able to handle increased repayments.

“Most people had already started factoring that in, it’s a conversation we’ve been having the last six to 12 months, we’ve done simulations [with clients] around what would happen if rates rise … [and it’s also] factored into serviceability buffers,” he said.

CoreLogic research director Tim Lawless said this was the first of many interest rate hikes that banks will pass on quickly, if not immediately.

“Lenders will be focused on maximising their profits. Anybody who has a mortgage should be expecting that will be passed on by the banks as soon as practical,” Lawless said.

“Anyone who has a debt with a floating rate should be budgeting for interest rates to go well above what they are at the moment.”

He said the timing and magnitude, earlier and higher than expected, was due to the highest inflation rate in years and an improving economy.

“That’s the silver lining … we probably wouldn’t have seen the timing brought forward or the magnitude.”

Westpac senior economist Matthew Hassan said although most home owners expect rate rises, the 25 basis point rise from the RBA was a wake-up call and slightly larger than expected.

“We know from our own survey of consumer sentiment that most Australians were expecting rates to move higher over the next year,” Hassan said.

“And over a third were expecting rates to move by more than a percentage point. I think that’s a little underdone and there’s probably not a great appreciation of how quickly and how far rates will need to move.”

He said households have accumulated about $250 billion in savings since the pandemic hit thanks to government stimulus and reduced opportunities to spend. But once the post-lockdown spending normalises, interest rate rises will slow consumer spending to a sub-trend growth pace.

Hassan also warned that housing markets are at the beginning of a correction as rate rises affect borrowing capacity for buyers.

Most Viewed in Property