I’ve missed you! Premature baby girl who doctors said ‘wouldn’t make it’ cuddles her twin brother for the first time after being separated at birth to receive vital treatment

A premature baby girl who doctors said ‘wouldn’t make it’ has been reunited with her twin brother for the first time after they were separated for two weeks at birth.

First-time mother Laura Hough, from Walton, Liverpool, delivered her twins Neve and Louie via an emergency C-section at 30 weeks on 8th March because Neve wasn’t getting enough nutrients in the womb.

The twins, who were born at Liverpool Women’s Hospital with Louie weighing just more than 3lbs and Neve just more than 1lb, were separated at birth so they could both receive vital treatment.

Two weeks after the birth, proud parents Laura, 27, and Chris Carey shared heart-warming snaps of their newborn children finally being reunited and cuddling in the same incubator. 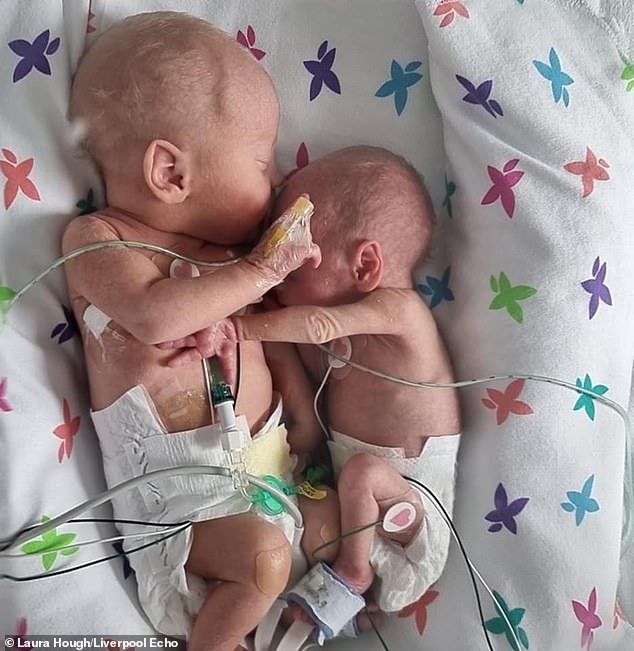 First-time mother Laura Hough, from Walton, Liverpool, shared snaps of her premature twins Neve (right) and Louie (left) cuddling each other for the first time after two weeks apart

Speaking about the pregnancy, Laura told the Liverpool Echo that the hospital wanted to wait until 28 weeks before performing an emergency C-section but she was warned that Neve ‘wasn’t going to make it’.

Laura explained: ‘They had me up the wall. I was going to the hospital twice a week because Neve, her placenta was deteriorating.

‘Her and Louie were in separate bags and he was fine but it was affecting her blood flow so I had to have an emergency C-section.

‘For a good few weeks I was carrying them I kept getting told by the hospital that she wasn’t going to make it.

‘They wanted her to make it to 28 weeks so they were keeping an eye on her blood flow.

‘And because it stayed stable they pushed it to 30 weeks before performing the emergency C-section.’

Laura, 27, (pictured with twins and partner Chris Carey) delivered Neve and Louie via emergency C-section on March 8 as Neve wasn’t getting enough nutrients in the womb

Despite Neve’s problems in the womb, Louie seemed to suffer more after their premature arrival as both of his lungs collapsed and he needed treatment to drain the air out of his lungs.

Due to the complications, the decision was made to separate the twins immediately after birth so Louie could quickly receive medical intervention and treatment.

Laura continued: ‘When they did come out she didn’t need any oxygen at all, she was fine. It was Louie, both of his lungs collapsed because he had air in them.

‘So he ended up receiving treatment to drain the air out of his lungs.’

Two weeks after being born, Louie and Neve were finally reunited in the same incubator and adorable snaps saw them lovingly ‘holding hands’ and hugging each other.

Laura said: ‘About two nights ago one of the other babies was being moved to a different unit so they brought Neve down and put her in the same room as her brother.

‘Then yesterday they put them both in the same incubator at the same time.

‘They ended up with their arms over each other, their legs crossed and holding hands. She tried to put her hands around his neck – it was funny to watch them.’ 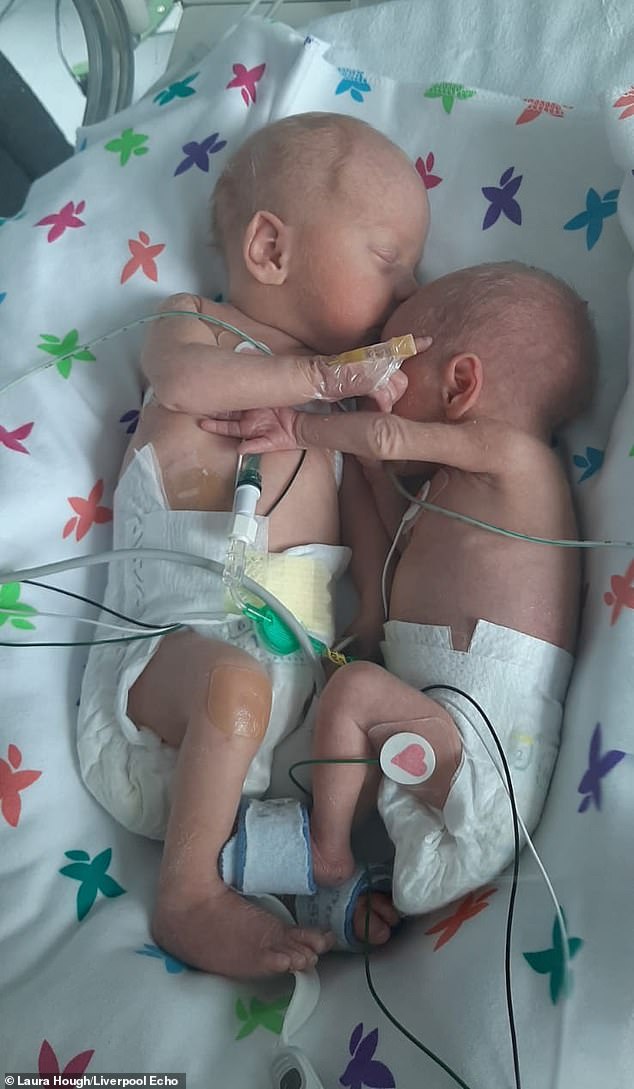 The premature twins, born at 30 weeks, were immediately separated at birth to receive vital treatment while Laura was told by doctors that Neve (right) ‘wouldn’t make it’

Laura admitted that despite her joy when her babies were born, she was also scared because the doctors had warned her that Neve might not make it.

But the baby girl has proven to be a ‘little fighter’, with Laura describing her as ‘unbelievable’ for thriving despite being born smaller than a ‘baby’s doll’.

Laura continued: ‘She’s wiped our eyes to be honest.

‘All the doctors who come and see her have a soft spot for her, and they’re made up with the both of them.

‘They said they’ll miss them when they leave because they need more little fighters like that to keep them going.

‘They’ve never seen a baby like her, so small without having to have any oxygen or anything to help her breathe she’s just doing it all on her own.

‘She’s smaller than a baby’s doll but she’s doing so well, she’s unbelievable.’