As it determines how to respond to a High Court ruling on the backpacker tax, put in place by then treasurer Scott Morrison in 2016, the option of keeping the cash and paying it back only if approached by those owed money is open to the government. 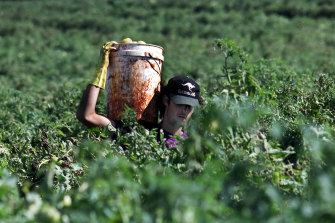 Backpackers are an important part of the seasonal workforce for many Australian farmers.Credit:AP

It made the ruling after British national Catherine Addy, who earned $26,576 as a waitress in Sydney between August 2015 and May 2017, challenged the law. She argued she qualified as an Australian resident for tax purposes, which would have reduced her income tax bill by more than $2000.

The original version of the backpacker tax was announced by then treasurer Joe Hockey in his 2015-16 budget. Under this plan, all backpackers would have been hit with a 32.5 per cent tax rate on every dollar they earned in a move aimed at boosting the budget line by $200 million a year.

But an uproar among farming groups, who feared the high tax rate would drive away backpackers, and the Nationals backbench forced the government into a compromise deal that reduced the tax rate to 15 per cent.

This cost the budget $420 million over the forward estimates. To offset this hit, backpacker superannuation accounts are taxed at 95 per cent when they leave the country while the passenger movement charge was increased by $5. That increased charge applies to all people departing Australia.

Treasurer Josh Frydenberg said on Thursday the government was looking at its response to the High Court ruling.

“The government is aware of the High Court decision and the ATO is currently considering the implications of this decision and will provide guidance to taxpayers as soon as possible,” he said. “The government will work with the Treasury and ATO to ensure that taxpayers have certainty around the tax treatment of their incomes.”

One option immediately open to the government is to retain the tax it collected from backpackers. Tracking down these people could prove almost impossible while in many cases these people will be owed less than $1500.

The government is close to releasing an overhaul of tax residency laws that could be tweaked to take into account the High Court ruling as it applies to people under double taxation agreements.

Backpacker numbers have collapsed through the COVID-19 pandemic, causing problems for the horticultural sector, which relies heavily on young backpackers to carry out picking duties. There were just 1330 short- and long-term visitors from those countries with double taxation agreements in September, compared to 136,830 in September 2019.

But the High Court ruling meant the government would have to consider a range of options, some of which would sharply drive up the tax rate on backpackers who did not satisfy Australian residency requirements.

“Just taking away the tax is going to make it very unpalatable to those people who don’t come from ‘protected’ countries or who don’t qualify for tax residency,” he said.

Shadow treasurer Jim Chalmers said the High Court’s ruling highlighted how the original backpacker tax was policy made on the run.