Ballet is a grand and glorious thing – and often rather serious. Not so when the ‘Trocks’ are on stage, the all-male company sassily spoofing classical and modern dance with impeccably hilarious aplomb, and resplendent with wonderful ‘drag’ names from Minnie Van Driver to the Legupski brothers. The fun starts with their full drag bios in the particularly splendid programme, revealing which dancer defected three times to the US (and was returned) and who did not have the talent or intelligence to be good at dancing (and so was accepted immediately into The Trocks), plus the dreaded “uninvited” guest artiste.

Founded in 1974, the chaps have been merrily mangling the classics for decades but their schtick always sticks its landing because it is done with evident love for the art form and impressive respect for the technique. Among the pratfalls and visual gags, they also take time to flourish some fabulous form, never more on point than when they are en pointe.

Guffaws rang out constantly during the recent London run at the Peacock Theatre as they slowly and deliciously roasted Swan Lake throughout Act 1, sensationally led by Varara Laptopova (Takaoimi Yoshino) reeling off stunning leaps and turns while mugging merrily to the crowd as the Queen of the Swans.

Throughout, make sure you watch the faces as much as the footwork and fumbles and you’ll be amply rewarded. A hilarious pas de trois rinses the time-old comedy of a tiny male dancer with two towering ballerinas and the spoofed classic Dance of the Cygnets is so much fun you ache to get up there and join in. 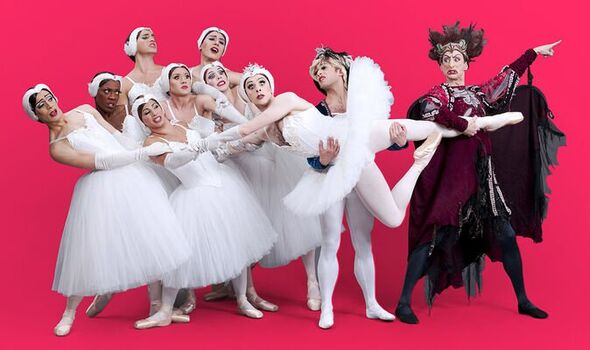 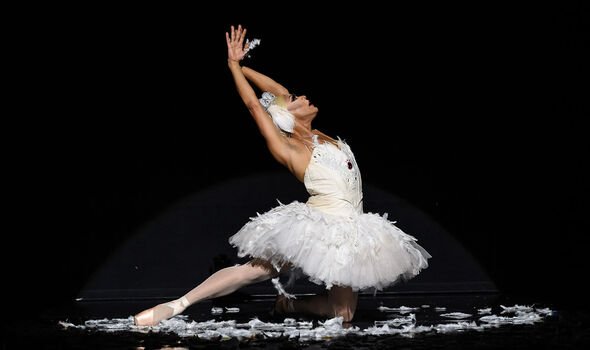 Equally impressive is the scene-stealing solo The Dying Swan, performed by Olga Supphozova, aka Robert Carter, who has been with the troupe since 1995.  He brings the house down with every arthritic twitch and gurning groan as the falling feathers start to stick to his hands and face amid the extraordinary finesse. Absolutely sensational. 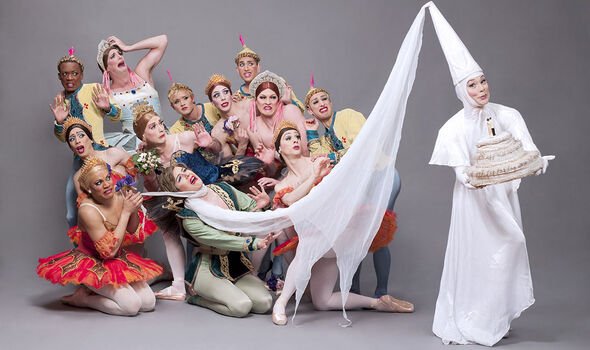 This week’s Programme B swaps out the last two pieces for the gaily giddy Vivaldi Suite and the Hispanic hysteria of Majisimas.

When the UK tour resumes next week in Brighton, audiences will enjoy Swan Lake and the Vivaldi Suite plus the barnstorming Raymonda’s Wedding.

It’s one of my favourites from their repertoire and wisely ditches all the turgidly serious plots about wars and suffering from the original Raymonda and just skips to endless showboating at the happy ending. Best of all, it keeps Marius Petipa’s sublime choreography for twenty sublime minutes where the giggles are, for once, eclipsed by the gasps at the divine dancing.